How to Train Your Dragon - Catholic Courier 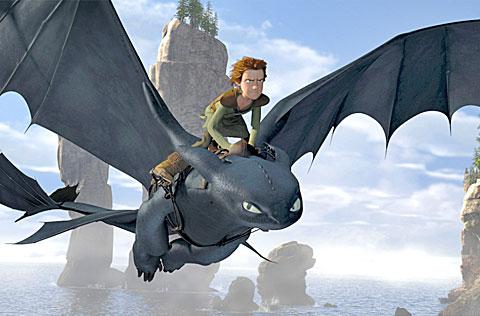 Fear not, the perennial story line is quite accessible. And though not overly taxing on brain cells or the imagination, "How To Train Your Dragon" (DreamWorks) constitutes an entertaining ride thanks to terrific animation. Unlike many 3-D films, the impressive visuals appear to have been the driving force behind project and not merely an afterthought.

One way of measuring the movie’s success is to note that it’s not something you’re going to see on your television set (just yet). It belongs in theaters. Directors Chris Sanders and Dean DeBlois, the duo behind Disney’s "Lilo & Stitch," have fashioned a robust boy’s own action-adventure with a constructive message.

Segments bring to mind classic big-screen adventures such as "King Kong" and "Gunga Din," and the thrilling aerial sequences will inevitably invite comparisons to "Avatar." Adults should be forewarned: Some of the vigorous action scenes may frighten young moviegoers.

Our hero is Hiccup (voiced by Christian Slater sound-alike Jay Baruchel), a Viking teenager living on the Island of Berk in the icy North Atlantic. Life in this settlement is dominated by the ongoing battle with dragons, who regularly steal food and incinerate homes. The colorful, fire-breathing creatures come in multiple sizes and varieties with names like "Deadly Nadder," "Gronckle" and "Hideous Zippleback."

The be-all-and-end-all of a male Viking’s existence (they resemble the primitive marauders on those credit-card commercials) is killing said dragons. Hiccup is an exception. While he desperately wants to slay his first beast, he’s a scrawny and easily distracted twig who, instead of being on the warrior track, apprentices for the blacksmith Gobber (voiced by Craig Ferguson). His predicament is all the more distressing because his father Stoick the Vast (voice of Gerard Butler) is the Viking alpha male.

Things start to turn around for Hiccup when he encounters a rare "Night Fury" dragon in the forest. Unable to bring himself to dispatch the wounded animal, he befriends and tames it. Black, leathery and batlike, Toothless, as he’s dubbed, proves as cuddly as he is ferocious. Hiccup’s pacifist revelation coincides with Stoick finally agreeing to let him begin Viking training (think gladiator school) alongside his peers.

You could say Hiccup becomes a dragon whisperer. Turns out, dragons have been completely misunderstood and he uses his untapped engineering and animal-training skills to foster harmony between Vikings and dragons — after vanquishing their common enemy, a Godzilla-like monster. Hiccup’s self-actualization disarms the belligerent premise of his society; it has the romantic byproduct of impressing teenager Astrid (voice of America Ferrera).

Along with the scarier skirmishes and certain vivid descriptions of violence, the other element some may find troublesome is the assumption that dragons ought to be domesticated. You don’t have to be an animal-rights activist to feel uneasy about the degree of servitude implied.

On a more positive if slightly grisly note, a major injury Hiccup sustains during the climactic battle conveys the message that violence has consequences, even if your cause is just. Such realism is unusual in a fantasy, which is another reason "How To Train Your Dragon" is an above-average movie of its kind.

The film contains much relatively intense fantasy action, harsh descriptions of Viking-dragon mayhem, two instances of potty language, and two mildly off-color references to body parts. The USCCB Office for Film & Broadcasting classification is A-II — adults and adolescents. The Motion Picture Association of America rating is PG — parental guidance suggested. Some material may not be suitable for children.

– – –
?
McCarthy is a guest reviewer for the U.S. Conference of Catholic Bishops’ Office for Film & Broadcasting. More reviews are available online at www.usccb.org/movies.