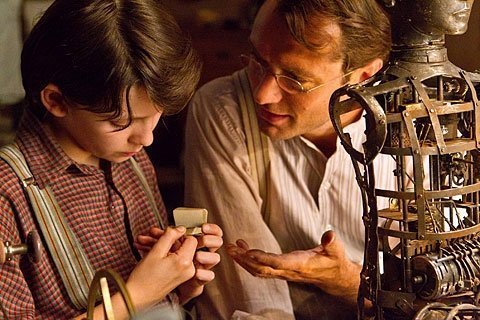 NEW YORK (CNS) — Set against the luminous background of 1930s Paris, the family-oriented 3-D fable “Hugo” (Paramount) is a visually rich, emotionally warm adaptation of author Brian Selznick’s best-selling — and Caldecott Medal-winning — novel, “The Invention of Hugo Cabret.”
¬†
While it represents a suitable holiday treat for most, though, director Martin Scorsese’s film includes fleeting passages of dialogue touching on adult matters and some mild misbehavior that hinder recommendation for all.
¬†
Scorsese’s canvas is broad and crowded, but at its center stands the diminutive figure of the title character (Asa Butterfield), a 12-year-old orphan who passes a hand-to-mouth existence in one of the City of Light’s great train stations. Early scenes only gradually reveal the circumstances that have left Hugo in this precarious and vulnerable situation.
¬†
Following his beloved father’s death in a fire — his mother’s demise had taken place some years previously — Hugo was taken in by his drunken Uncle Claude (Ray Winstone), who lived and worked in the terminal servicing its many clocks. Claude, however, has subsequently disappeared.
¬†
To disguise the fact that he no longer has a guardian — and so avoid being shipped off to an orphanage by the seemingly merciless officer responsible for station security (Sacha Baron Cohen) — the mechanically gifted lad clandestinely carries on Claude’s labors. In his spare time, Hugo draws on the same talents in his struggle to repair a mysterious automaton he and Dad had been tinkering with at the time of the latter’s death.
¬†
Knowing that, when operative, the automaton is able to write, Hugo feels sure that his father will use the primitive robot to send him a message from beyond the grave.
¬†
Driven to shoplift the spare parts needed for his project, Hugo incurs the wrath of Georges (Ben Kingsley), an embittered toymaker who keeps shop within the terminus. But he draws a very different reaction from Georges’ adopted daughter Isabelle (Chloe Grace Moretz), a vivacious girl of his own age — as well as a fellow orphan — who swiftly befriends him.
¬†
These primary proceedings are embellished by the amusing romantic endeavors of Baron Cohen’s increasingly sympathetic, though enduringly nameless, character as well as those of two more peripheral figures.
¬†
Along with his paean to the wondrous city by the Seine and to the realm of the imagination — a territory of dreams and eccentric inventiveness that the film skillfully navigates — Scorsese uses late-reel plot developments concerning Georges’ mysterious past to celebrate the pioneers of early cinema.
¬†
Yet, while childlike in many respects, “Hugo” does raise a few red flags for the youngest. A brief side story, for instance, concerns a policeman who doubts the paternity of the child his wife is carrying and there’s also a scene where Hugo — whom we’ve seen pilfering food stands for survival — picks the lock of a movie theater so that he and Isabelle can sneak in for free.
¬†
Additionally, kids might be frightened by Hugo’s more spectacular — sometimes life-threatening — scrapes.
¬†
For teens and their elders, nonetheless, and especially for film enthusiasts, “Hugo” manages to cast a charming spell.
¬†
The film contains a few mature references, occasional peril and some implicitly endorsed petty lawbreaking. The Catholic News Service classification is A-II — adults and adolescents. The Motion Picture Association of America rating is PG — parental guidance suggested.
¬†
– – –
¬†
Mulderig is on the staff of Catholic News Service.