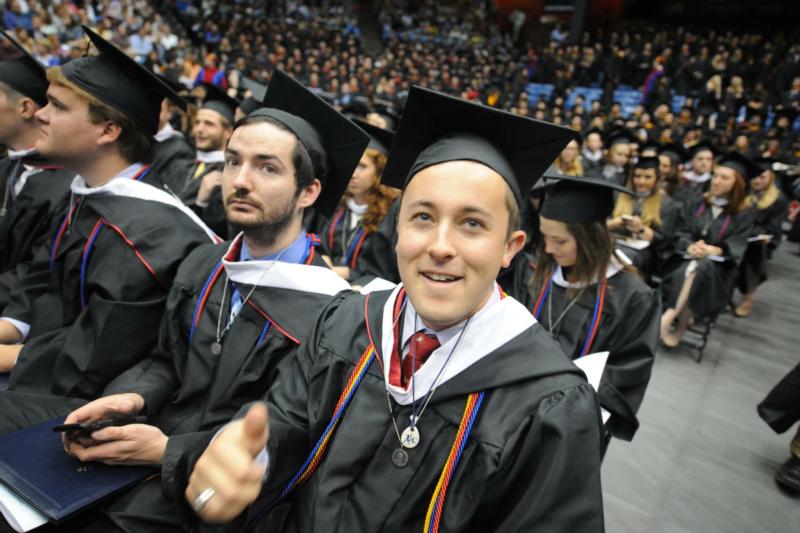 Dominic Sanfilippo, giving thumbs up, is seen May 8 during graduation at the University of Dayton in Ohio. One of 12 students who graduated with a human rights degree, Sanfilippo said the degree equips him for the world ahead.

WASHINGTON (CNS) — Dominic Sanfilippo, one of 12 students who graduated with a degree in human rights May 8 at the University of Dayton in Ohio, said he has grown accustomed to explaining his major to people over the years.

He’s often been asked: “What do you plan to do with that?”

Or he has picked up the unspoken question from “the uncle who says, ‘Oh that’s nice'” when Sanfilippo says what he’s studying.

He understands the reaction, pointing out: “Business majors do business and engineering majors do engineering.” But even if there are not specific human rights jobs available, he said the degree equips graduates to navigate careers they choose where they can apply learned skills of critical thinking, compassion and advocacy.

Sanfilippo, who spoke to Catholic News Service May 3, less than a week before graduation, said when he was looking at colleges four years ago, Dayton’s human rights program appealed to him. The new graduate, who is from Chicago, also majored in philosophy.

The University of Dayton, a Marianist university, started the nation’s first undergraduate human rights studies program through the Department of Political Science in 1998 and then 10 years later it became one of the first universities to offer bachelors’ degrees in human rights studies. Since then, more than 100 students at Dayton have graduated with human rights degrees and have pursued careers as human rights advocates and academics or work in legal, governmental and nonprofit groups.

Mark Ensalaco, an associate professor of political science at the University of Dayton, who helped get the human rights studies started on campus and was its first director, sees tangible results from the program, which added a human rights center in 2013 that focuses on raising awareness about issues such as human trafficking.

The university’s human rights center has had a “unique mission” from the get-go, Ensalaco said, pointing out that it was not just going to be another center that provided an occasional film series, but one truly involved in advocacy work such as its recent efforts to eradicate slave labor in Brazil for products sold in the U.S.

So when people ask what does one do with human rights studies, it turns out there are some tangible answers.

And for the next year, Sanfilippo already has plans that more or less coincide with his degree. He expects to spend a year in a newly launching Marianist service program based in Dayton called PULSE where he will live in a community, akin to a Catholic Worker House with other participants doing essentially volunteer work across the city.

Sanfilippo will be spending his time at Chaminade Julienne Catholic High School in Dayton, a Marianist-run school, where he plans to mentor students on social justice issues and help with community outreach.

“They’re essentially creating a job for me since it’s the first year of the program,” he said.

Sanfilippo notes that he is at a unique time in his life and that during the upcoming year he will figure out if he will go on to graduate school, political work or something else.

“I’m excited about it,” he said, about the service year. He also admits that it took him awhile to get to this spot because a few years ago he wouldn’t have imagined not looking for a great job or applying for a fellowship.

Now he says he’s lucky to have the chance to share his work and faith with others.

“It makes all sense in world,” he added, noting that the unknown future path after next year doesn’t overwhelm him.

Then adding something not every college graduate could, he said: “I’ve become more comfortable with ambiguity.”

Copyright ¬© 2016 Catholic News Service/U.S. Conference of Catholic Bishops. www.catholicnews.com. All rights reserved. Republishing or redistributing of CNS content, including by framing or similar means without prior permission, is prohibited. You may link to stories on our public site. This copy is for your personal, non-commercial use only. To request permission for republishing or redistributing of CNS content, please contact permissions at cns@catholicnews.com.