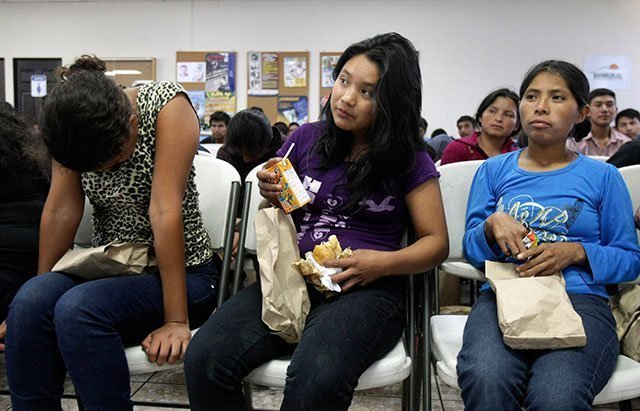 Migrants from Guatemala who have been deported from the U.S. wait to provide their personal information to immigration authorities July 10 after arriving at La Aurora International Airport in Guatemala City. A growing wave of families and unaccompanied minors fleeing Guatemala, El Salvador and Honduras are streaming by the thousands into the U.S.

WASHINGTON (CNS) — Petitions and letters to members of Congress and the Obama administration are among the measures being pursued by advocates urging humane treatment of the Central American children who are trying to migrate to the United States.

A petition delivered July10 to members of Congress, President Barack Obama and Homeland Security Secretary Jeh Johnson called for a humanitarian approach to the surge of migrants from El Salvador, Honduras and Guatemala that has overwhelmed the government’s capacity to handle them.

Since the fiscal year started Oct. 1, more than 57,000 minors traveling on their own have been apprehended at the U.S. border, swamping a system designed to handle 6,000 to 7,000 such people a year.

Under a federal law intended to thwart human trafficking, minors from Central America are required to be in the custody of Border Patrol no more than 72 hours before they are handed over to the Office of Refugee Resettlement, known as ORR. The agency is supposed to try to place such minors with relatives in the United States while the government pursues deportation or the individuals seek asylum allowing them to stay permanently.

In a related situation, more than 39,000 families — typically mothers with children — also have been apprehended. Those families typically are processed, given orders to appear for deportation proceedings and taken to a bus station. Those drop-offs by the Border Patrol have been happening across the country.

Signed by nearly 4,000 people of faith, the petition backed Obama’s request for $1.9 billion in supplemental funding for the crisis, and $200 million to avoid funds having to be transferred from current refugee programs under ORR, the agency within Health and Human Services that is charged with the care of Central American minors who arrive in the United States without a parent or guardian.

The petition also urged Congress not to approve Obama’s request to deport the minors more quickly. Instead, it said, they should be provided with screening and other services that would be required under the Trafficking Victims Protection Reauthorization Act.

The petition said children should be released as quickly as possible to U.S.-based family members or housing situations other than the large institutional settings that are currently being employed.

Dozens of priests and religious brothers and more than 200 women religious were among the signers.

During a July 10 teleconference hosted by the petition’s sponsor, Church World Service, Mercy Sister Kathleen Erickson said she had recently returned from a six-week visit to San Pedro Sula, Honduras. She said three times while she was there, the nuns with whom she was living told of seeing dead bodies being hauled out of drainage ditches when they were outside the heavily protected compound where they live.

Sister Kathleen said among the residents of the convent is the 14-year-old niece of one of the nuns, whose mother was taken away by armed men as she fed her infant. The woman was never seen again, there was no investigation and no arrest, she said.

"Do politicians in the United States honestly believe that it would be safe to return these kids home? These children are not a threat to us, but I believe we are deporting them back to serious threats. I think to certain death," she said.

Jesuit Father Sean Carroll, who runs the Kino Border Initiative on the Arizona-Mexico border, said it has been challenging to try to collaborate with the local federal authorities to provide pastoral and social services assistance to the children who are being held in a Border Patrol warehouse in Nogales, Arizona.

"Many children are victims of sexual abuse, physical abuse and robberies — not only in their countries of origin, but also along the way as they travel through Mexico to the northern border," he said. Offers to provide pastoral visits and other support have been rebuffed.

"Based on our experience, there is a critical need" for physical, spiritual, emotional support as well as legal representation, Father Carroll said.

A July 9 statement by the California Catholic Conference, which represents the bishops of the state in public policy matters, expressed solidarity with the hundreds of displaced people who have been moved to California as federal agencies seek to manage their processing. In early July, busloads of families that were to be temporarily housed in Murrieta, California, were met by protesters who forced the buses to turn around.

The bishops’ statement said they recognize that the church as a responsibility to come to their aid, providing practical and pastoral support.

"These children and families have journeyed to our country, fleeing violence and destitution in Central America," the California bishops said. "Sadly, their experience in California has thus far been marked by hostility and near chaos. They are exhausted, afraid and clinging to hope."

The bishops said Catholic Charities agencies and other community groups are collaborating to provide hospitality and other assistance. They urged Congress to respond with the necessary resources to care for the unaccompanied children, said they oppose fast-tracking of deportation proceedings and encouraged people to support the social service agencies in their efforts.

"The gravity of this situation transcends politics; it is truly a humanitarian crisis that calls all of us, Catholics and others of good will, to respond with compassion and with urgent action," the statement said.

An action alert from the Jesuit organizations asked people to insist that Congress act to protect people and not shortchange protections called for by federal law.

"In a move that fails to live up to our nation’s shared values and tradition as a land that offers safe haven to those fleeing harm, some in Congress are seeking to give the administration the authority to circumvent current law that requires DHS to ensure children are properly evaluated for the possibility that they were trafficked, or are eligible for refugee status. Sidestepping these protections risks endangering the lives of vulnerable children," the Jesuits’ alert said.