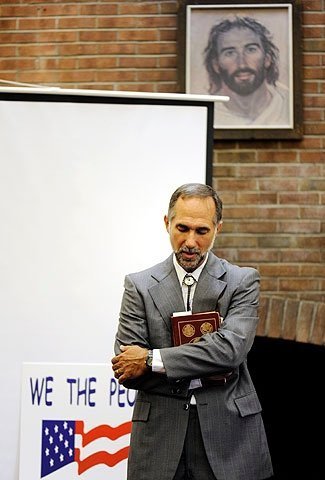 Canon lawyer Philip Gray pauses for prayer before giving a presentation on moral conscience June 22 during the Festival for Freedom at Notre Dame Retreat House in Canandaigua.

CANANDAIGUA — Religious liberty was the hot topic of discussion for the more than 500 people who visited Notre Dame Retreat House between June 21 and July 4 to take part in the Festival for Freedom.

The festival was planned in response to the U.S. Conference of Catholic Bishops’ request that Catholics spend the two weeks leading up to July 4 engaging in prayer, education and action related to the topic of religious freedom. The bishops’ request, in turn, was inspired in part by a U.S. Department of Health and Human Services (HHS) mandate that nearly all employers offer health-care plans that include coverage for sterilization and contraceptives, some of which could cause abortions. Although this mandate contains a religious exemption, the exemption is so limited that it likely would exclude many Catholic institutions, according to the USCCB.

The Canandaigua event was planned by the 30 or so Catholics and non-Catholics on the "Renewing Our Legacy Task Force" and included lectures from more than two dozen well-known speakers, panel discussions, movie showings, and daily Mass and eucharistic adoration.

"We saw over 500 different people in the course of those two weeks, many who came almost daily," said Deacon Claude Lester, the festival’s chief organizer. "The planning group was pleased with the quality of the speakers, the engagement of the audience and the opportunity to bring people together to share concerns of their faith and to learn more about our American Catholic heritage."

When the planning group evaluated the festival after its conclusion, many members thought there should be some sort of follow-up event that would integrate American history with Catholic culture and help people move forward.

"We knew we needed to be grounded in moral development as we acknowledged the crisis of religious freedom which faces our country. It became obvious in our conversation that we need to explore how to draw on the gifts of the Holy Spirit to send us forth in action," said Deacon Lester, director of faith formation for St. Benedict Parish in Canandaigua and East Bloomfield.

The resulting follow-up event, "Conscience — Spirit — Freedom" will be held Aug. 4 at Notre Dame Retreat House and will feature two presentations and one panel discussion. Daniel Kane, who is a medical nuclear physicist and director of the UNESCO Chair in Bioethics and Human Rights in Rome, Italy, will give a presentation about Christian conscience formation, and members of the St. Thomas More Lawyers Guild will give a talk about "The Crisis of Religious Freedom." A panel of local Christians will discuss their struggles to discern the feelings of their hearts and the message their hands, feet and voices are encouraged to act upon. The event will conclude with night prayer and an informal discussion with the day’s speakers.

People who can’t come to the intensive forum on Aug. 4 and weren’t able to participate in any of the Festival for Freedom activities still can take steps to educate themselves about the issue of religious freedom. Many of the presentations and discussions that took place during the festival were recorded and are available in either video or audio format under the "Media" tab on the Festival for Freedom’s website, www.FestivalforFreedom.com. There are many other excellent sources of relevant information online, noted Kyle Duncan, general counsel of the Becket Fund for Religious Liberty. Duncan took part in a July 2 panel discussion with Kathy Gallagher, director of pro-life activities for the New York State Catholic Conference, and Jonathan Tobin, senior online editor of Commentary Magazine.

The U.S. bishops have compiled a wealth of information and resources about religious freedom and the HHS mandate at www.Fortnight4Freedom.org, and the Becket Fund has tried to position its own website, www.BecketFund.org, as "information central on the HHS mandate," Duncan said during the discussion. The Heritage Foundation (www.heritage.org), the Ethics and Public Policy Center (www.eppc.org) and the Alliance Defense Fund (www.alliancedefendingfreedom.org) also are great sources of information, he said. The state Catholic conference’s website, www.NYSCatholic.org, also includes a lot of information, as well as an action center to help citizens contact their legislators, Gallagher said.

It’s important to read the information put out by people on both sides of any issue, including religious freedom, in order to more fully understand that issue, Tobin said. And no matter what you’re reading or where it comes from, it’s important to read it with an open, questioning mind, he added, urging his audience members to evaluate the sources quoted in any article as well as the article’s basic premise.

"The most important skill I think any of us can develop in our quest to become informed citizens is learning to read critically," Tobin said.

Kathy Smith said she enjoyed the July 2 panel and the several other Festival for Freedom events she attended. Smith, who belongs to Peace of Christ Parish in Rochester, had only planned to attend one or two of the festival’s events, but it kept drawing her back like a magnet, she said.

"It’s phenomenal. I don’t know if this opportunity will ever come again, but it’s here now and I’m taking advantage of it," she said.