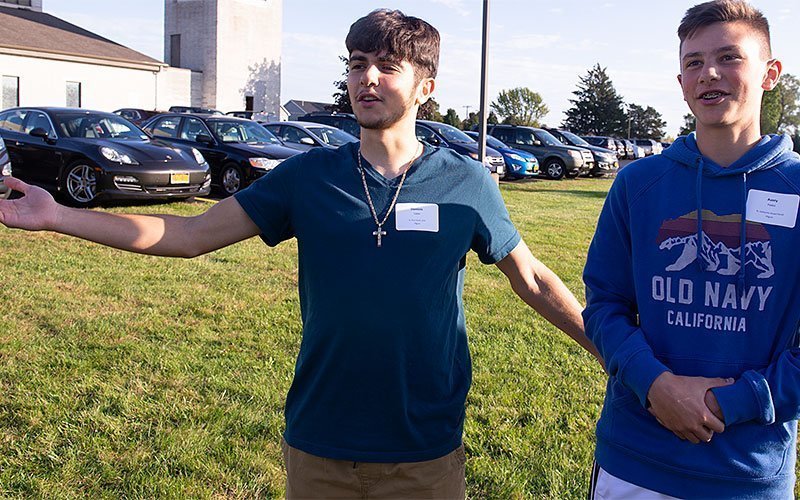 Dominic Lippa and Avery Fedor take part in an ice breaker activity Oct. 20 after a Mass at St. Jude the Apostle Church in Gates for the youths and chaperones who will be attending the National Catholic Youth Conference in November. (Courier photo by John Haeger)

It was the first time she had ever organized an NCYC trip. In just a few weeks, Burgio is set to do so again, but this time she’ll be overseeing 25 youths and 13 chaperones, the largest diocesan group attending the event.

St. Mark Church is one of 24 diocesan parishes attending the 2019 NCYC, which will take place Nov. 21-23 in Indianapolis. The three-day conference is an “opportunity for young people to explore their spirituality,” explained Leslie Barkin, diocesan coordinator of youth and young-adult ministry. The event features a variety of workshops, liturgies, speakers and activities to help high-school students celebrate and grow more deeply in their faith. Sponsored by the National Federation for Catholic Youth Ministry, the event has taken place biannually since 1991 and has been held in Indianapolis since 2011. More than 20,000 youths and chaperones from more than 180 dioceses are expected to attend this year’s conference.

This year’s theme is “Blessed Broken and Given” and features such Catholic speakers as Sister Bethany Madonna from the Sisters of Life; Mark Hart, executive vice president for Life Teen International; and Rwandan genocide survivor Immacul√©e Ilibagiza.

“We are very excited that she is speaking this year,” Barkin said of Ilibagiza, who was the keynote speaker for the 2017 Rochester Catholic Women’s Conference.“To have our youth and adults going to able to hear her story is going to be incredible.”

The conference also will offer opportunities for prayer and participation in the sacrament of reconciliation. There also will be a procession of the Blessed Sacrament from St. John the Evangelist Church across the street to the Indiana Convention Center, where many of the NCYC activities will be conducted. Adoration and Mass will take place inside Lucas Oil Stadium, with the more than 20,000 youths and chaperones in attendance.

“It was an amazing to see how a football stadium goes from people rocking out, jumping up and down, to total reverence,” Burgio recalled of her 2017 NCYC experience.

The Diocese of Rochester has a total of 320 youths and chaperones attending the conference this year, compared to 445 pilgrims from 38 parishes attending in 2017. Barkin said that lower NCYC participation is a trend that has been seen in dioceses nationwide. Missing school and activities and the high expense of the trip are some of the reasons why teens are choosing not to participate, she noted. And in the Diocese of Rochester, she said, there has been a surge in parishes forgoing NCYC participation and instead coordinating their own trips to one of the five smaller-scale Steubenville Youth Conferences held at Franciscan University of Steubenville each summer.

Despite the smaller diocesan delegation this year, Barkin said that the NCYC conference still offers young people an outstanding opportunity to experience the American church on a large scale.

“Those three days can have a huge impact on a young person,” she told the Catholic Courier. “We wouldn’t want to stop providing that type of impact for those still able to commit to going.”

Burgio added that NCYC gives the youths hope, “especially in these challenging times we are in, that there are thousands of kids their age that are practicing their faith and showing it. There is so much to be gained by that.”