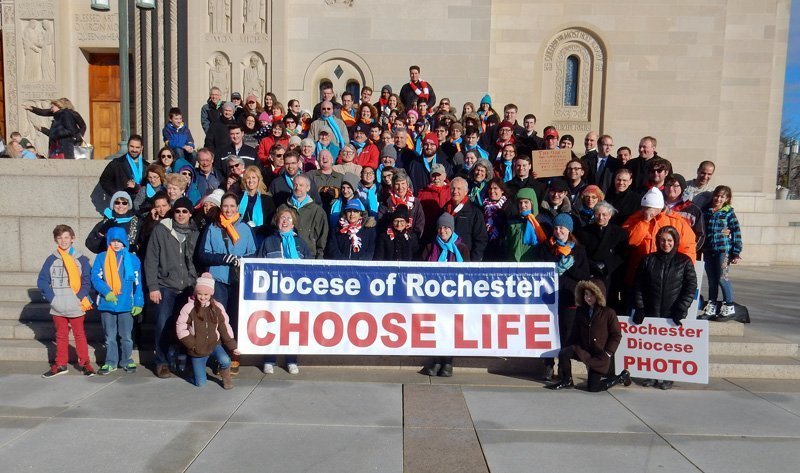 Pro-life pilgrims from the Diocese of Rochester pose outside of the National Shrine of the Immaculate Conception.

Standing up for the unborn — and doing so among tens of thousands of like-minded folks in the nation’s capital — was a thrill for Melissa DiNovo.

"Wow. I am exhausted. But this trip was so worth it," remarked Melissa, 16, during the bus ride home from the March for Life. "My friends and I experienced amazing things throughout the day."

She was among several hundred pilgrims from the Diocese of Rochester, including Bishop Salvatore R. Matano, who journeyed to Washington, D.C., for the 44th-annual march Jan. 27. Marchers gathered for a noontime rally at the Washington Monument, then, with temperatures in the low 40s, they processed up Constitution Avenue to the Capitol and Supreme Court.

Through their participation, pro-life advocates from around the United States showed unified opposition to the Jan. 22, 1973, U.S. Supreme Court Roe v. Wade decision legalizing abortion in the United States. They’ve done so every year since the first March for Life took place in 1974.

A new and encouraging wrinkle accompanied the most recent march. One of the rally speakers was Vice President Mike Pence, the highest ranking government official ever to address a March for Life crowd in person.

"Life is winning in America, and today is a celebration of that progress," Pence declared during the Jan. 27 rally.

Earlier that day, newly inaugurated President Donald J. Trump had tweeted, "The #MarchForLife is so important. To all of you marching — you have my full support!"

Pilgrims to Washington also took part in such activities as attending liturgies and a youth rally, meeting with local legislators and visiting the Supreme Court prior to the march. Bishop Matano, for one, concelebrated Mass that morning at the Basilica of the National Shrine of the Immaculate Conception. He later joined Rochester-area participants for the march.

Melissa said she was struck by the amount of fellow youths she witnessed aiding the pro-life cause.

"It was so inspiring to see other people my age who believe the same things I do," said Melissa, a junior at Our Lady of Mercy School for Young Women.

She was part of a large group of students and adults representing Mercy and McQuaid Jesuit high schools who traveled by bus to Washington. Additional travelers in that contingent came from Siena Catholic Academy in Brighton and St. Mary School in Canandaigua, according to Liz Gilges, bus organizer.

Will Harvey, a junior at McQuaid, agreed with Melissa about the importance of young people coming together to defend life, saying their involvement was "the most compelling thing" for him about the trip.

"The newest generation is taking what the older generation pro-lifers have created and are expanding on it more than ever," stated Will, 16, who noted that "being pro-life is a huge part of my life.”

”Abortion is the greatest human rights abuse in this country. Participating in the March for Life shows our children, our future leaders, how to be a witness for what they believe in and what they can do about something if they don’t believe in it,” added Gilges, who belongs to St. Benedict Parish in Canandaigua and East Bloomfield.

Diocesan youths were further represented at the March for Life by a bus from Rochester’s Holy Apostle Parish, which each year brings young city residents to the march. Also on hand in Washington were buses carrying pilgrims of all ages originating from the Webster/Penfield and Greece areas, both in Monroe County, as well as from Horseheads in Chemung County and Ithaca in Tompkins County.

Five days prior to the march, Bishop Matano presided at a Mass for Life before a packed congregation at Holy Apostles Church. The liturgy served as an opportunity for people not traveling to the actual march to still take part in the cause. Related March for Life events around the diocese included a rosary prayer vigil near a Planned Parenthood facility in Elmira Jan. 21, and adoration at St. Mary Church in Dansville Jan. 26.