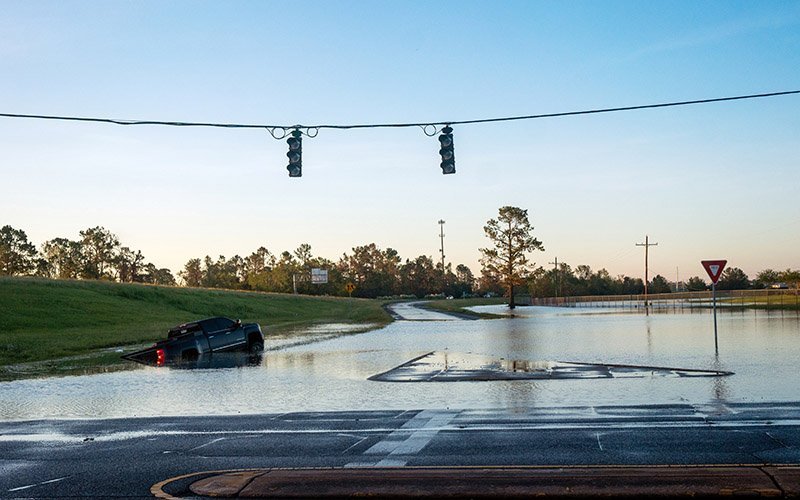 A submerged car in Lake Charles, La., is pictured on a flooded street Oct. 10, 2020, after Hurricane Delta swept through the area. (CNS photo by Kathleen Flynn/Reuters)

WASHINGTON (CNS) — Hurricane Delta deluged much of Louisiana with rain — as much as 15 inches reported in some areas — with damage tallies and estimates yet to be completed in the days following the storm’s Oct. 9 landfall.

In Lake Charles, one of the hardest-hit areas, churches and schools that had been damaged by Hurricane Laura in late August took a fresh beating. More than half of the diocese’s 39 churches had tarps on their roofs after Laura, according to Father Ruben Buller, vicar general, and most of those tarps blew off during Delta, soaking those churches anew.

Father Buller told Catholic News Service that he estimated recovery efforts for those churches hit by both Laura and Delta have been set back by three weeks. In the meantime, the diocese’s six Catholic schools were to stay closed the week of Oct. 12 to allow for extensive inspections for damage.

In a way, though, “we were very blessed,” said Father Buller, who doubles as “director of recovery” for the diocese, as “many of our parishes that did not receive damage the first time did not sustain damage” from Delta.

Bishop Glen J. Provost of Lake Charles and Father Buller did not evacuate, nor did most of the diocese’s priests, Father Buller said.

So many people heeded an evacuation order issued in advance of the hurricane, said diocesan spokeswoman Pamela Seal, that traffic on the highway leading to Houston, which ordinarily takes two-and-a-half hours, took 10 hours instead. “The interstate was a parking lot,” Seal said.

Weekend Masses were celebrated at Immaculate Conception Cathedral in Lake Charles despite low turnout — just 15 at some Masses. The cathedral had fresh but minimal damage, and was without power. “We still don’t have landline service,” Father Buller told CNS.

The neighboring Diocese of Lafayette, Louisiana, announced the temporary closures of 23 schools, some just for Oct. 12, while others would be closed Oct. 12-13. The diocesan chancery also was closed Oct. 12.

The diocese set up an Amazon “wish list” page with items people were in immediate need of, including tarps, disinfectant, hammers, jigsaw blades, ladders, extension cords and other hardware. The site can be accessed at https://www.amazon.com/hz/wishlist/ls/304ZQI8OD9592.

“We beseech the good Lord for the safety of all families and their homes threatened by this hurricane,” said Archbishop Jos√© H. Gomez of Los Angeles, president of the U.S. bishops, in a Nov. 9 statement. “We pray especially for all the first responders who courageously risk their own lives to assist those in need.”

The Lafayette Diocese also was asking for donations to assist victims of both hurricanes. Donations can be made at https://secure.acceptiva.com/?cst=9fd2bc. Catholic Charities of Acadiana, which covers the Lafayette Diocese, also was seeking volunteers to aid disaster victims at https://www.tfaforms.com/4633555.

The Louisiana dioceses of Shreveport and Houma-Thibodaux reported no damage. In Houma-Thibodaux, “while there was flooding outside of our levee protection system, all our church parishes and diocesan locations reported no flood damage or wind damage from the hurricane,” said an email to CNS from Lawrence Chatagnier, editor and general manager of the Bayou Catholic, the diocesan magazine.

Hurricane Delta struck the resort city of Cancun, Mexico, Oct. 7 as a Category 2 storm. The storm toppled trees and power poles and wrecked the facades of some buildings, but didn’t do major damage, according to state and local officials. No serious injuries or loss of life were reported.

Caritas Quintana Roo responded to the hurricane by providing food to families in shanties built on the outskirts of the city, which were built by people working in informal jobs, such as vending, and had arrived from impoverished parts of southeastern Mexico in search of employment.

“In the zones with ‘invasions'” — as shanties are sometimes called in Mexico — “or ‘irregularities,’ where electricity isn’t officially connected, there’s no drainage, mud floors and small homes made of wood and laminate, there are many affected people,” said Miguel Gutierrez, director of Caritas Quintana Roo, in a WhatsApp message. Caritas belongs to the Diocese -of Cancun-Chetumal.

Hurricane Delta added to the difficulties faced by Cancun, founded 50 years ago as a centrally planned tourist destination, only to see its main industry collapse due to the coronavirus outbreak. Caritas, Gutierrez said, had been assisting 14,000 households with care packages of food prior to the pandemic, but saw that number nearly double over the past seven months.

He added Caritas was still attending to families flooded out in early October by Tropical Storm Gamma, which claimed six lives and dumped heavy rains on the Yucatan Peninsula, along with the southeastern states of Tabasco and Chiapas.

Caritas in the Archdiocese of Yucatan and Diocese of Tabasco responded to Gamma with care packages and organizing collections of food, clothing and supplies for “people who lost everything,” said Sister Eduviges Palacios, director of Caritas in Tabasco.

Contributing to this story was David Agren in Mexico City.