I could never vote for Biden, priest says in clarifying prior letter - Catholic Courier 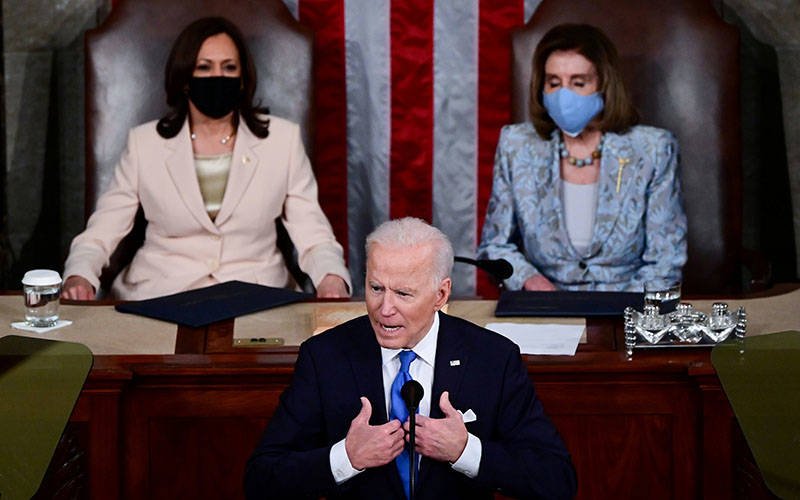 Vice president Kamala Harris and Speaker of the House Nancy Pelosi, D-Calif., listen to President Joe Biden addresses to a joint session of Congress in the House chamber of the U.S. Capitol in Washington April 28, 2021. (CNS photo by Jim Watson/Pool via Reuters)

In Dan Lill’s April letter to the editor, he wondered about (the phrase) “as his supporter” if I was referring to people like Dan, who may have voted for Joe Biden, or if I was inferring that I too was a supporter of President Biden (see “Seeks aid of Biden voters,” Catholic Courier, March 2021 print edition). He wasn’t alone in his question.

So, let me make it crystal clear what I meant. I could never vote for or support someone like President Biden — or the other 13 Catholic senators — who already is using our tax money for abortions, to kill innocent, helpless pre-born children, as he did by eliminating the Mexico City Policy; he is funding Planned Parenthood, (which) performs over 340,000 abortions each year; he also wants to eliminate the Hyde Amendment; as well as to codify in law Roe v. Wade, which will kill more pre-born children and wound more vulnerable women.

That is why the U.S. Bishops state so correctly in Faithful Citizenship-Forming Consciences (#14) “Participation should help transform the (political) party to which we belong; we should not let the party transform us in such a way that we neglect or deny fundamental moral truths, or approve intrinsically evil acts.” This approach continues to happen with Catholics in both political parties.

Additionally, I found that the Bishops statement in Faithful Citizenship (#16) rings true in my experiences of presidential or legislative elections: “At this time some Catholics may feel particularly homeless, sensing that no public party and too few candidates share a consistent concern for human life and dignity.”