I Don't Know How She Does It - Catholic Courier 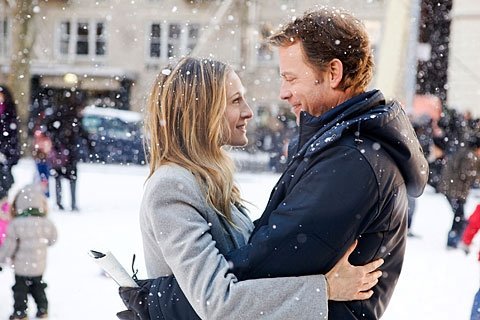 NEW YORK (CNS) — There’s a small pro-life moment of sorts tucked inside "I Don’t Know How She Does It" (Weinstein), but it’s quickly swallowed up in the sentimental goo of this gentle film about a wife and mother struggling to succeed in high finance.

Momo Hahn (Olivia Munn), the super-efficient and unemotional assistant of investment banker Kate Reddy (Sarah Jessica Parker), announces early on that she has no intention of being saddled with marriage and children, then unexpectedly finds herself pregnant. She hints that she’s considering not having the child (abortion is not mentioned but can be inferred).

Kate launches into a spirited defense of motherhood, but the moment is interrupted by one of her many domestic crises with architect husband Richard (Greg Kinnear) and their young son and daughter. The father of Momo’s child never makes an appearance.

Momo blithely concludes that although having a baby feels like a mistake, "maybe my baby will turn into Justin Bieber. He started as a mistake. Now he’s a billionaire."

The film tries to be about a lot of things and ends up being about nothing in particular. No single crisis rises to the level of anything more than a speed bump.

Kate has a jealous sniping rival at work in Chris Bunce (Seth Myers), rival mothers Wendy Best (Busy Philipps) and Janine LoPietro (Sarah Shahi) at her daughter’s school, and the potential for an adulterous romance with new client Jack Abelhammer (Pierce Brosnan), but when she insists on making time instead to be with her husband and children, it turns out she can have it all — unlike in the real world for many women — even when she passes off a store-bought pie as her own for the school bake sale.

The film contains a fleeting reference to abortion, frequent crude and crass language and fleeting profane language. The Catholic News Service classification is A-III — adults. The Motion Picture Association of America rating is PG-13 — parents strongly cautioned. Some material may be inappropriate for children under 13.