I followed the star and was glad - Catholic Courier 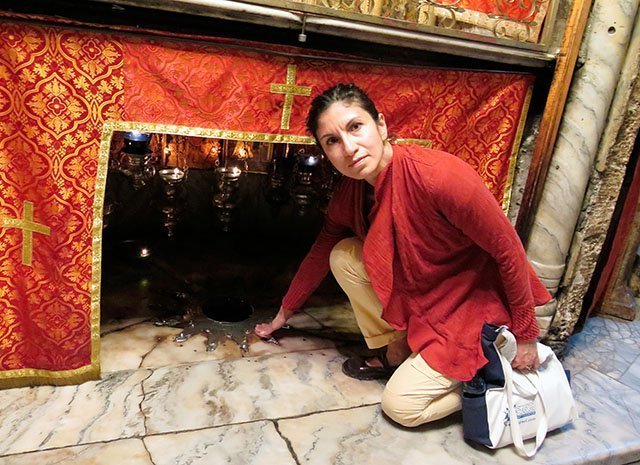 Staff writer Annette Jiménez touches the spot believed to be the birthplace of Jesus in the Church of the Nativity in Bethlehem.

During my recent trip to Israel, a member of my group suggested going to the birthplace of Jesus.

I was the only hesitant one, as it meant crossing into the West Bank. But Bob Mullen, a freelance Catholic photographer, had been there and assured us it was safe. He only suggested we not say we were journalists, which I later realized not everyone in the group heard.

Our guide, Gideon Har-Hermon, made arrangements for a guide, since he cannot go as an Israeli. He left us at the checkpoint, and we simply walked through the turnstile and into Bethlehem.

Two drivers met our group, and we split up. That for me was the first unnerving moment as we drove through the crowded streets of merchants and restaurants, and I saw women dressed in burkas.

Our guide greeted us warmly upon arrival and walked us through the beautiful church among hundreds of tourists. He even gave our group its own time — just as the guard was ushering other tourists out — in the grotto area that contains the manger. At that moment, Christian González from Austin said he understood: "Were not our hearts burning within us …"

Then, our guide complimented our group’s knowledge, and someone mentioned we were Catholic journalists.

Fortunately, there was no need for panic attacks. We continued, and he left us at his brother’s souvenir shop to "help the economy," as Har-Hermon advised. Then, we were driven back, just as the many people who work in Jerusalem returned.

We put our bags through a screener, flashed our passports to a young man and were back in Israel. Har-Hermon said to me, "See, it was OK."

I wiped my forehead in a sigh of relief, and was relieved I had kept the faith.