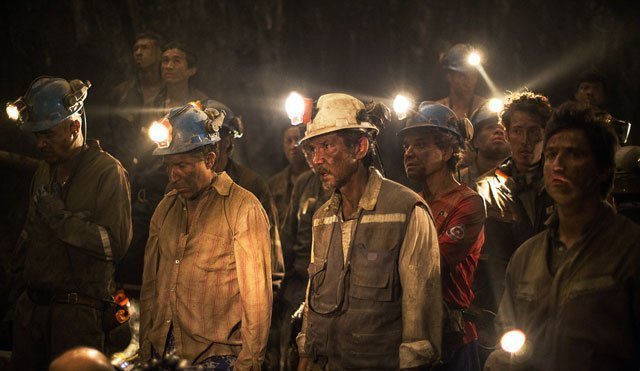 Oscar Nunez and Lou Diamond Phillips star in a scene from the movie "The 33."
By Mark Pattison
Catholic News Service
WASHINGTON (CNS) — Patricia Riggen, the Mexican-American filmmaker who directed the upcoming move "The 33" about the Chilean miners’ rescue in 2010, said Warner Bros., the studio releasing the film, made no attempt to get her to downplay the role of faith in the miners’ story.
"I didn’t have any agenda or command from Hollywood as far as how to deal with this part of the story," Riggen said. "The only command I had was in my heart, to tell this story from the point of view of the miners and learn what they had to say."
She added, "I was raised in a Catholic family. I want to make, and I’ve always tried to make, movies that make you a better human being. I try to make movies a good spiritual experience that can better our world, to make what the world can be, and not the dark side of human beings. … This was, of course, a beautiful story that allowed me to do what I love best."
In an Oct. 30 telephone interview with Catholic News Service from New York, where she was promoting the film, Riggen outlined how "The 33" shows the minors practicing their faith.
"The faith of the miners is very present from the first moment they go in the mine. There’s a little Virgin (statue), they cross themselves. They honk at it, and they say a prayer as they drive in. They do that every day of their lives," she said. "They ask God for their protection because they know they’re driving into a very dangerous place.
"As the story develops and they find themselves trapped in this dark hole, their belief in God starts playing a very, very big part in helping them stay alive. They think together. There’s a moment of redemption down there," Riggen continued. "One of the characters who has an addiction, and he is a lost soul, embraces God. For me, all of these things happened. It’s true and it’s wonderful to be able to show that. … He’s still living a good and healthy life right now."
Riggen said, "There’s a symbolic scene in the movie I call ‘the last supper’ where they all share their last tuna cans. They all ask each other for forgiveness. The whole value of this move is forgiveness. And family and faith in God that I just feel very positive to transmit to the world. At the very end, we have a last miner leave a message in the wall … and it says, ‘Here lived 33 miners. God was in us.’ And that’s what closes the movie."
Being Hispanic gave Riggen a leg up in directing and co-writing the film, she told CNS. "My heritage gives me many advantages. The fact that I can talk to them in their own language (helps) because they don’t speak English."
She added, "I think all Latin Americans feel a shared sensibility. We share music, we share, you know, a way of seeing the world. We share a religion.
We are very passionate and emotional people. So in a sense, I don’t think was hard for me to capture the essence of the Chileans."
Riggen recalled being in Washington Oct. 27 for a screening of "The 33" with two of its stars, Lou Diamond Phillips and Juliette Binoche, as well as the
Chilean ambassador to the United States. Afterward, "he was crying," Riggen recalled. "This is such a Chilean movie. How did you do it?" he remarked. Riggen said she replied, "We’re not that different."
The biggest coup for Riggen was securing an audience with Pope Francis for the miners.
"I had this crazy idea that I wanted to show this movie to the pope, and they told me that’s crazy, that wouldn’t happen, that’s impossible to have. But in the ’33’ world, nothing is impossible," Riggen said.
"We wrote a letter," and someone from the Vatican, writing for Pope Francis said, "Yes, I want to see it," Riggen said. "So we sent a DVD. The pope loved the movie," and as it turned out, "he would love to invite the 33 to the Vatican. It’s one of the most incredible things in our lives. They spent the fifth-year anniversary of their rescue, right that day (Oct. 14), at the Vatican, getting a handshake form the pope and a few words of support. I just think that he spoke about hope that day, and he spoke a few words about the miners about what hope means. That was the single thing that kept them alive, never giving up hope."
Riggen noted, "One of the miners in the movie has baby who was born while he was down there. Her name was ‘hope,’ Esperanza. That was the name of the camp where all the families lived outside for a month, Camp Esperanza. The girl was there (with the miners), she’s 5 years old. The miner had her in his arms. (Pope Francis) touched her head and blessed her.
"I’m so glad that we could give that to the miners as a gift."
Copyright © 2023 Catholic News Service, Inc. All rights reserved. Linking is encouraged, but republishing or redistributing, including by framing or similar means, without the publisher's prior written permission is prohibited.