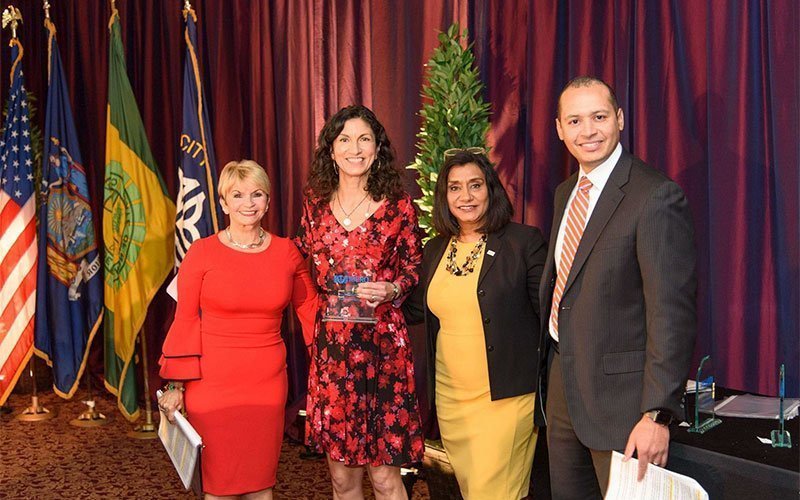 That’s the word Annette Jim√©nez used to describe the way she felt upon learning she was the 2018 recipient of the Ibero-American Action League’s Alicia Torres Award.

“I felt humbled to receive this great honor because it’s named after a woman who dedicated herself to improving the lives of Latinos, but she did it in an unassuming way. She never sought out recognition and just did what needed to be done,” Jim√©nez remarked.

It is this same unassuming nature that made Jim√©nez the perfect choice for this year’s honoree, according to Hilda Rosario Escher, Ibero’s president and chief executive officer. Jim√©nez is well-known in the Latino community because she is the principal reporter for El Mensajero Cat√≥lico, yet she doesn’t seek recognition or accolades for the important work she does, Rosario Escher said.

“Annette has this humbleness about her,” Rosario Escher explained. “She keeps the community abreast of what’s going on, but in addition to that, Annette does a lot of volunteer work and no one knows about it. ‚Ä¶ She is not out in the community saying, ‘I did this,’ or, ‘I did that.’ She just does it, and that is the way that Alicia Torres was.

Jim√©nez received the Alicia Torres Award during Ibero’s 50th Anniversary and Recognition Awards Luncheon, which was held at the Rochester Riverside Convention Center Oct. 17. Jim√©nez, who has written for El Mensajero since its launch in 2005, was the obvious choice for this year’s award because she is a great writer who works hard to ensure that members of the Rochester region’s Latino community have access to information they need, Rosario Escher said.

“Our community doesn’t have access to a lot of information, and she makes sure that she writes about important information that the community should have. El Mensajero covers everything in our community,” Rosario Escher said.

Jim√©nez, for her part, said she is proud to write for the area’s only Spanish-language newspaper and takes her role in the Latino community seriously.

“With more than 80,000 Hispanics living in our region — a number that continues to grow — I feel an obligation to make sure their stories are told and the community is informed about issues affecting them as well as opportunities, challenges and successes,” she said. “Whether the story is about our residents and organizations coming together to help the families from Puerto Rico who made Rochester their home after Hurricane Maria, or shining a light on the hardships endured by migrant workers in our region, Mensajero must serve as a voice for the voiceless.”

When Jim√©nez is not covering events for El Mensajero, she frequently may be found volunteering in the community. She recently served on the PUEDO coalition, which seeks to increase awareness of chemical dependency and its effects on the Hispanic community, and mentored middle-school students at Rochester’s James Monroe High School. She also oversees publicity and social media for the nonprofit Borinquen Dance Theatre, which uses dance to help youths succeed.

The connections she’s made through her work with El Mensajero as well as her volunteer efforts with Borinquen Dance Theatre have allowed her to “pay it forward” in an effort to improve the lives of under-served children and teens in the community, Jim√©nez said.

“I grew up with a single mom, so I understand economic hardship,” she explained. “I could not have had the opportunity to attend Catholic schools, which led to earning a scholarship to attend Utica College, without the generosity of my community and mentors who encouraged me to pursue my goals. I hope, in some small way, I am helping others realize that they, too, can achieve whatever dreams they have.”