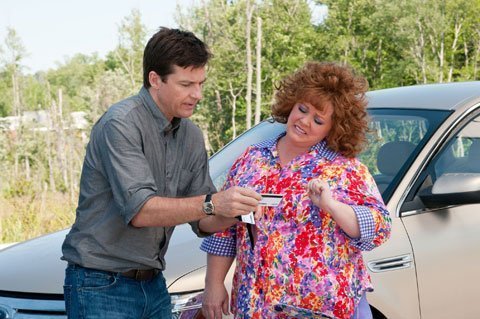 NEW YORK (CNS) — When Denver family man Sandy Patterson (Jason Bateman) discovers that his identity has been stolen — with huge credit card debts racked up in his name and criminal charges pending against him — it’s not surprising that he expects the police to intervene on his behalf.
¬†
No such luck, at least in director Seth Gordon’s morally murky comedy “Identity Thief” (Universal).
¬†
Sadly for Sandy, the titular culprit Diana (Melissa McCarthy) is a resident of Florida, which places her outside the reach of Colorado law enforcement. So it could take years to bring her to justice.
¬†
But Sandy’s ruined credit rating and reputation have placed his newly secured, high-paying finance job at risk. So he decides to travel down to the Sunshine State, take custody of Diana himself and drag her back to his neck of the woods to put things right.
¬†
As it turns out, Sandy gets more trouble than he bargained for: Diana’s illegal exploits have drawn the unwelcome attention of Julian (Tip “T.I.” Harris) and Marisol (Genesis Rodriguez), a pair of ruthless bounty hunters who quickly decide to target Sandy as well.
¬†
Despite an interesting, if slightly unbelievable, premise, Craig Mazin’s screenplay offers few fresh jokes. He relies instead on exploitative sight gags and foul language.
¬†
Additionally, his script seems to wink at theft in situations far removed from those narrow and extreme circumstances within which Judeo-Christian morality might excuse it. Stealing a loaf of bread to feed your starving family is one thing. Using your unappreciative ex-boss’ credit card to fund a night of high living in a five-star resort, as Sandy eventually does, is something else entirely.
¬†
Do unto others as others have done unto you is, after all, anything but a golden rule.
¬†
The film contains skewed moral values, much slapstick and other violence, considerable sexual content including a semi-graphic nonmarital encounter, off-screen masturbation and brief rear nudity, occasional profanity, frequent rough and crude language and an obscene gesture. The Catholic News Service classification is L — limited adult audience, films whose problematic content many adults would find troubling. The Motion Picture Association of America rating is R — restricted. Under 17 requires accompanying parent or adult guardian.
¬†
– – –
¬†
Shaw is a guest reviewer for Catholic News Service.