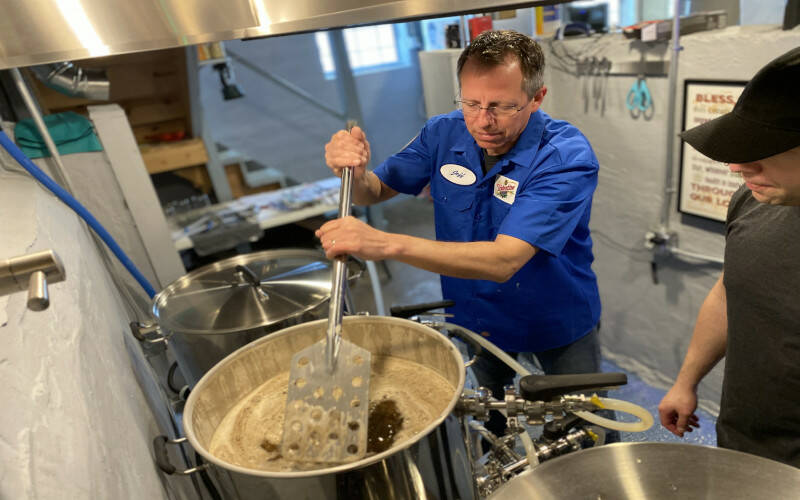 Trevor Alcorn comes from a storied line of brewers. His great-great-grandmother brewed beer in her bathtub in Chicago during Prohibition in the 1920s.

Home brewing has been a tradition in the family through the decades, but there’s been a 180-degree turnaround in the endeavor since its illicit start.

“My maternal grandfather brewed in the 1990s. He taught my father how to brew,” noted Alcorn. “My dad was brewing a bit then, but for a while the hobby was forgotten. Several years ago, my parents were moving houses and we came across all the brewery supplies that my father had. I asked him to teach me how to brew.”

Originally the brewing was a casual pastime, a relatively simple process. Alcorn likened it to getting a premade mix for a cake. However, since 2019, he, his father, Jeff Alcorn, and brother Cameron Alcorn have upped their brewing game.

“Now we do what all commercial brewers do. We start from scratch with our own grains that we buy,” he said in an interview for Catholic News Service. “It’s almost as if you are an actual chef making something from scratch. The only difference technically between us and a commercial brewer is they’ve got bigger equipment.”

Jeff is Tridentine’s brewmaster. “He’s the master behind creating all the recipes and everything else for the beer,” Alcorn explained. “Cameron is our graphic designer, he helps us create the website, all of our labels, he’s the design genius behind all that.”

What truly sets Tridentine Brewing apart from other brewers is the family’s vision and mission. When they started brewing more frequently, they decided to start naming their beers and, as devout Catholics, they wanted the names to have some meaning, say a reference to a saint.

Alcorn has a deep devotion to Blessed Karl of Austria and so one of their creations is named in his honor.

“When we were going through and creating beer recipes, the first few beers that we created were Vienna lagers,” he recalled. “There’s no greater person to link to the Vienna lager than Blessed Karl since Vienna was the capital of Austria-Hungary during his time.

“I came up with the idea of a Hopsburg Beer so I didn’t infringe on the Habsburg name and it had a bit of a quirky twist to it since hops is the key ingredient in the beer-making process.”

Alcorn explained his devotion to the emperor who, along with his wife, Empress Zita, is on the road to sainthood; the empress has the title “Servant of God.”

“I’ve always been into history and politics. I held a seat on our local City Council about 10 years ago and was doing some research about World War I and politicians in general,” he said. “When you think about Catholic politicians who have been good role models, they are few and far between.

“I stumbled upon Blessed Karl and found out that he was going through the sainthood canonization process. He was a great father, a great husband and a great politician.”

This devotion goes further than naming a beer after Blessed Karl. Alcorn and his wife, Katelyn, who have four children ages 6 and under, named their 2-year-old daughter Zita, in honor of Empress Zita, and their infant son is named Augustus Karl.

Technically, Tridentine Brewing is a hobby business, which means that the team does not sell their product, but they give plenty away to family, friends and for events such as church picnics.

The most notable occasion where they shared their beer this year was Oct. 21, the feast day of Blessed Karl of Austria. They delivered 200 bottles of Emperor Karl beer to St. Mary Mother of God Church in Washington.

Archduke Eduard Habsburg-Lothringen, a descendent of Blessed Karl, who is the Hungarian ambassador to the Vatican and the Sovereign Military Order of Malta, flew in from Rome to attend the Mass held at the church, which houses one of a handful of shrines in the United States to Blessed Karl.

After the Mass, there was a reception at the church, featuring Blessed Karl beer, and the archduke gave a presentation about the saintly man and held a question-and-answer sessions afterward.

“I loved being able to go to the shrine and the holy sacrifice of the Mass there. The coolest part for sure was meeting His Excellency Ambassador Habsburg in person,” Alcorn said. “I follow him on Twitter (along with nearly 42,000 other fans). He’s a great guy. You can tell he’s very devoted to the faith.”

For his part, the archduke seemed impressed with Alcorn’s product and touched by his devotion to his ancestor.

Alcorn works full-time in IT for a life sciences company but he has a dream of turning Tridentine Brewing into a commercial brewery someday and they’d be able to sell their beer on site, across the Midwest, and their products could then be ordered online and shipped throughout the United States.

“There’s great interest in the United States in Blessed Karl but also something that is Catholic-themed. We’re trying to make all the labels beautiful, really honoring various saints,” he said.

“There’s a brewing prayer that exists — a beer blessing,” said Alcorn. “So, we’ll pray to the Lord for our beer or pray to St. Wenceslaus because he is patron saint of brewers, and we pray to Blessed Karl for his intercession. Especially when we’re brewing his beer.”