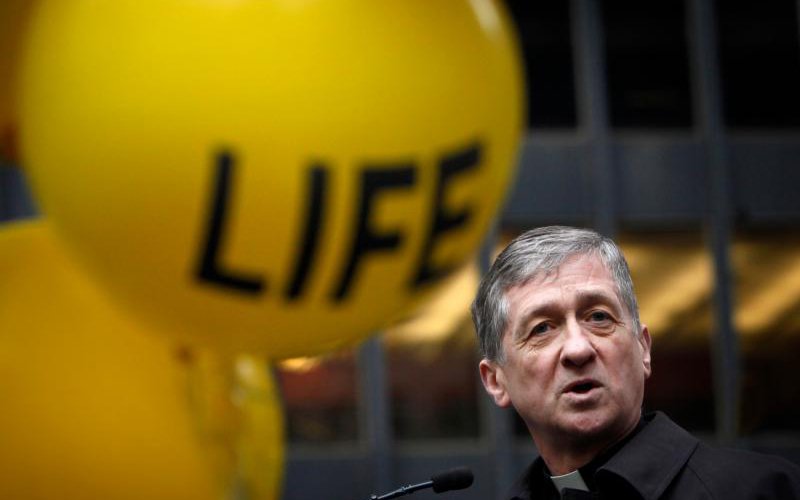 Chicago Cardinal Blase J. Cupich, pictured in a Jan. 18, 2015, photo, and other Illinois bishops, are urging the state's lawmakers to take no action on a bill that "dramatically rewrites current abortion law, and goes further than Roe v. Wade." (CNS photo by Karen Callaway/Catholic New World)

SPRINGFIELD, Ill. (CNS) — In a 64-50 vote May 28, the Illinois House passed an abortion bill the Catholic Conference of Illinois called “an extreme measure” that allows “for the abortion of unborn life at any stage of pregnancy and for any reason.”

The legislation now goes to the state Senate for consideration. If it passes, it heads to the desk of Democratic Gov. J.B. Pritzker, who said he plans to sign the legislation into law.

In a May 29 statement, the Catholic conference, which is the public policy arm of the state’s Catholic bishops, urged senators to reject the measure, asking them “to consider carefully what message a vote for this legislation sends to our people.

In its May 28 reaction to the House vote, the Catholic conference said the lawmakers’ decision “to take up and pass the so-called Reproductive Health Act is a grave tragedy and a collective moral failing.”

“Illinois has previously distinguished itself by recognizing and upholding human dignity,” the conference said. “It has welcomed and defended the rights of immigrants and refugees and eliminated the death penalty. It is therefore incomprehensible to us that the General Assembly has prioritized denying protection to the most vulnerable among us by enacting some of the most liberal abortion access laws in the nation.”

Two days ahead of the House vote, Cardinal Blase J. Cupich, who heads the Chicago Archdiocese, and the bishops who head the state’s other five dioceses, urged state lawmakers not to act on “the misnamed ‘Reproductive Health Act,'” which they said was the result of efforts by lawmakers to “propel the legislation into the end-of-session rush.”

The bishops in their statement said the version of the bill that was introduced “rewrites current abortion law, going further than Roe v. Wade in stripping human rights and dignity from the unborn child with this single statement: ‘A fertilized egg, embryo, or fetus does not have independent rights under the laws of this state.'”

“The fundamental premise of the bill is flawed, and no amendment or tweak to the language will change the fact that it is designed to rob the vulnerable life in the womb of any trace of human dignity and value,” the bishops said.

Instead of rushing the bill through before the May 31 end of the legislative session, the bishops had urged the lawmakers to set aside consideration of it, “especially since no final form of the bill has been published, vetted through hearings or fully discussed.”

Action was needed on several major issues requiring “bipartisan cooperation and unity,” they said, including passage of “a balanced budget for the health, education and safety of Illinois residents and crafting a statewide construction plan with unresolved funding.”

“Conversations on these matters need to take place in an atmosphere of comity and civility and any talk of abortion will only sow more divisiveness and disharmony in today’s polarized political climate,” the bishops said.

In its statement on the House action, the Illinois Catholic Conference called it “a truly sad day for Illinois.”

Supporters of the abortion bill “portrayed it as a simple cleanup bill, taking old statutes off the books,” it said. “This is false. The bill includes new provisions that render any regulation of abortion impossible, strip away standards for – and regulation of — clinics where abortions are performed, and mandate private insurance plans subject to Illinois’ authority cover abortion.”

“It sends a message to everyone in our state that life is cheap,” the conference said, adding, “We will continue to make our case against such callous disregard for human life whenever it appears in society.”

The Catholic Church understands “the complex and difficult challenges facing women who have unplanned pregnancies or who carry babies destined to have short or difficult lives,” it said. “They deserve all the support society can give them.”

“But to deny that the lives growing within these women is anything other than human or that they would, in the vast majority of cases, develop into healthy children is simply to deny reality,” the conference added.

In other reaction to the House vote, the Thomas More Society, a pro-life law firm based in Chicago, said legislators who supported the bill leave a legacy of “cruel dehumanization on a mass scale.” It predicted if the measure becomes law, Illinois would be positioned “to become a major U.S. abortion destination.”

Peter Breen, a former Illinois state representative, who is the organization’s vice president and senior counsel, said House members “rejected the deep convictions of a strong majority of Illinoisans and voted to legalize late-term abortions without limit, wipe away health and safety licensing requirements, and make abortion a ‘fundamental right’ under Illinois law, ahead of even the right to free speech.”

“This bill expressly strips all rights from unborn children and wipes nearly every abortion regulation off the books in Illinois,” Breen added.