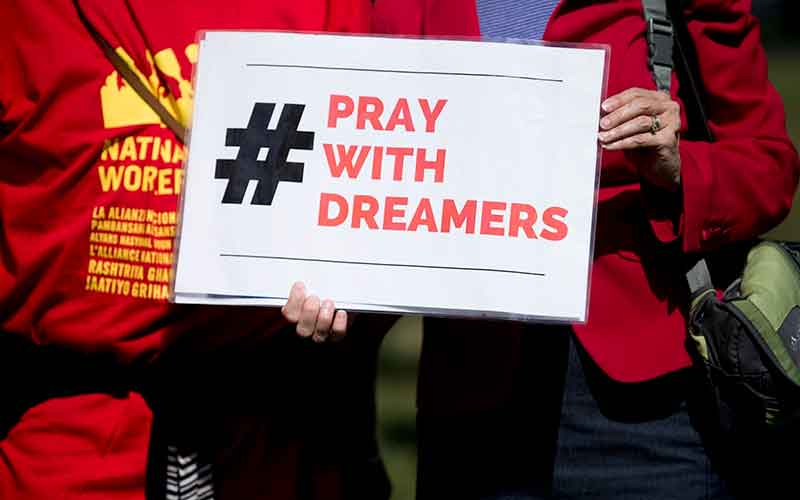 Demonstrators attend a rally near the U.S. Capitol in Washington Sept. 26, 2017, calling for passage of the DREAM Act, which would have created a path to citizenship for "Dreamers," the beneficiaries of the Deferred Action for Childhood Arrivals, known as DACA. A federal appeals court ruled Oct. 5, 2022, that DACA is unlawful but it agreed to preserve the program for existing recipients. President Barack Obama created the program in 2012 by executive action. (CNS photo by Tyler Orsburn)

WASHINGTON (CNS) — Catholic immigration advocates are emphasizing that the Oct. 5 ruling by a federal appeals court — finding the Deferred Action for Childhood Arrivals program is unlawful — sends another signal that permanent legislation is needed to protect young immigrants from deportation and put them on a path to U.S. citizenship.

A three-judge panel of the 5th U.S. Circuit Court of Appeals in New Orleans affirmed a lower court’s ruling last year that said the Obama administration did not have the legal authority in 2012 to create DACA in the first place.

This appeals court decision, similar to the ruling last summer from a federal judge in Texas, prevents the Biden administration from enrolling new participants in the program.

The new court decision continues to leave DACA in limbo. It did not say the program had to completely shut down or stop processing renewal applications, but it leaves in place last year’s order from U.S. District Judge Andrew Hanen that said DACA could continue only for current recipients with no new participants.

The 5th Circuit also returned the case to the lower court asking the judge to review new DACA regulations the Biden administration announced in August and set to go into effect Oct. 31.

“DACA, like asylum, the border — immigration policy writ large — doesn’t belong in the courts,” Dylan Corbett, executive director of Hope Border Institute, tweeted after the ruling was announced. “Congress and the White House need to pass legislation that honors our values, the rights and dignity of those who migrate, and the contributions of those who make America home.”

Similarly, Catholic Legal Immigration Network Inc., or CLINIC, tweeted Oct. 5 that the court’s decision “only exacerbates the uncertainty felt by current and future #DACA recipients. We must enact permanent legislative solutions so #DACA recipients can live and work in the U.S. — free from fear or threat of deportation!”

In a statement the next day, CLINIC executive director Anna Gallagher said the court’s decision was wrong and “only exacerbates the uncertainty felt by current and potential DACA recipients.”

“DACA recipients are our neighbors, friends, family members and co-workers. They are vital members of our communities,” she said.

“Most importantly, as Catholics, we know they are our brothers and sisters. It is imperative that Congress enacts permanent legislative solutions” to enable them to continue to live and work in the United States, she added.

Patricia McGuire, president of Trinity Washington University — where DACA students make up 10% of the enrollment — called the ruling “just terrible.”

In an Oct. 5 tweet, she said: “What is wrong with this country that it cannot allow such a simple act to exist without a devastating legal challenge? DACA recipients are hard-working, tax-paying, upstanding members of our communities, as college students they are brilliant and ambitious.”

And Cabrini Immigrant Services of New York City retweeted messages from a local immigration group urging current DACA recipients to renew their status as soon as possible and urging President Joe Biden and Congress to take action on this issue now.

Catholic immigration advocates expressed similar frustration with last year’s decision by the lower court where the judge ruled in favor of Texas and eight other states that filed suit in 2018 against DACA.

The states argued that President Barack Obama — who created the program by executive order — did not have the authority to do so because he bypassed Congress.

The states that joined Texas in the lawsuit — Alabama, Arkansas, Kansas, Louisiana, Mississippi, Nebraska, South Carolina and West Virginia — also said the program has been a financial strain.

DACA has enabled about 700,000 qualifying young people, described as Dreamers to work, go to college, get health insurance, a driver’s license and not face deportation. These young adults were brought to the U.S. as children by their parents without legal documentation.

Last summer, Washington Auxiliary Bishop Mario E. Dorsonville, chairman of the Committee on Migration of the U.S. Conference of Catholic Bishops, said the bishops were disappointed with judge’s ruling, but they also have known  DACA “was never meant to be a permanent solution for Dreamers.” He also said at the time that this issue calls for Congress to do something.

In an Oct. 6 statement, Bishop Dorsonville had a similar reaction to the appeals court ruling, saying: “We implore Congress, Republicans and Democrats alike, to provide a permanent solution for all Dreamers out of respect for their God-given dignity.”

“Until we have that solution, each new challenge to the DACA program creates further uncertainty and anguish for hundreds of thousands of people and their families,” he added.

Dreamers are “integral members of our communities,” he continued. “For many, the United States is the only home they know. But despite their daily contributions to the welfare of our nation, Dreamers are not afforded the same liberties as their native-born neighbors. This is a grave injustice unbefitting a moral society, and it must be remedied without further delay.”

Bishop Dorsonville noted that multiple bills are currently pending before the U.S. Congress that would provide permanent relief to Dreamers, including the American Dream and Promise Act and the Dream Act, both of which have been endorsed by the USCCB.

The Justice Department said it would “vigorously defend the lawfulness of DACA as this case proceeds,” and Biden said in a statement Oct. 5 that he was disappointed with the ruling.

“The court’s stay provides a temporary reprieve for DACA recipients, but one thing remains clear: The lives of Dreamers remain in limbo,” he said, adding: “It is long past time for Congress to pass permanent protections for Dreamers, including a pathway to citizenship.”

His administration will likely file a formal appeal, which could bring DACA back to the Supreme Court for the third time.

In 2020, the Supreme Court ruled against efforts by the Trump administration to end DACA, saying the actions being taken to rescind it had been “arbitrary and capricious.” In 2016, the nation’s high court was deadlocked in its 4-4 decision over expanding DACA to cover the parents of the program’s recipients.