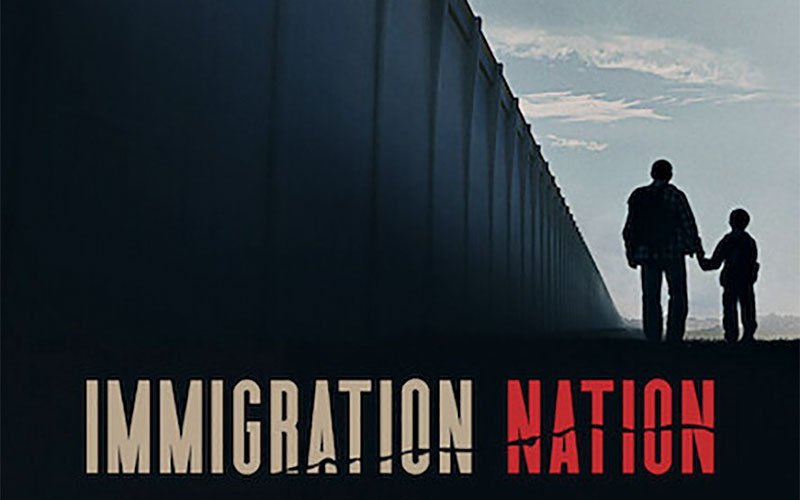 This is the TV poster for the documentary "Immigration Nation" streaming on Netflix. (CNS photo by Netflix)

NEW YORK (CNS) — The U.S. immigration system, most concur, is broken. Prescriptions for fixing it vary widely, however, and the issue is likely to be a prominent one in this year’s general election.

Given the range of views on the topic, it’s understandable the makers of the documentary series “Immigration Nation” try to include as many perspectives as they can. Yet, while the resulting program — which is streaming now on Netflix in six one-hour episodes — is often compelling and powerful, it suffers from being overly ambitious in trying to cover too much ground.

Having gained the trust of the numerous subjects they profile, the filmmakers leveraged it to gain exceptional access to U.S. Immigration and Customs Enforcement agents as well as to judges, attorneys, immigrants without legal papers, their families and those advocating on their behalf. The series benefits from the fact that all these participants have their say.

Schwarz and Clusiau include some traditional documentary elements such as interviews with experts and news footage. But for the most part, they employ a cinema-verite style that enables viewers to track the multiple real-life dramas they capture directly and in detail.

“Immigration Nation” distinguishes itself from other similarly themed films thanks to the incorporation of the experiences and perspectives of ICE officials.

Refreshingly, this approach challenges viewers to look beyond the preconceptions that prompt many to regard these officers as pariahs. By letting the agents speak for themselves, the filmmakers encourage viewers to reach their own conclusions.

The opening sequence of the series focuses on Operation Keep Safe, a New York City-based ICE project carried out in April 2018 that reflected changes in policy instituted by the Trump administration.

Prior federal action had concentrated on those with pending criminal charges against them. Under the current administration’s more aggressive “zero tolerance policy,” ICE is empowered to remove anyone subject to a deportation order.

Judy, an ICE veteran of nearly 12 years’ standing involved in Operation Keep Safe, speaks for others when she says, “The administration has changed, and we’re finally able to do our jobs.”

But some ICE officers identify with the plight of immigrants. An investigator named Mike, for instance, says, “You have to have a little empathy for these people. They just wanna make themselves have a better life. Who wouldn’t?”

The experience of Bernardo, a detainee from Guatemala, is fairly representative of what takes place on the other side of the divide. Separated from his wife, Rebecca, who remains in their homeland, and their teenage son, Emilio, who’s in Houston, Bernardo laments, “In this country, it’s like I’m no longer a father.”

Bernardo hopes, nonetheless, that “one day, in any moment,” the family “can be together” in the United States. An aggrieved Rebecca, by contrast, would rather have a house and a piece of land back home. “The nightmare,” she says to her spouse, “started the day you got arrested.”

“Immigration Nation” is at its best in revealing these intimate yet difficult moments, which former ICE Deputy Chief of Staff John Amaya says result from the government’s strategy of causing these families “maximum pain.”

Mature themes and emotional intensity render the show inappropriate for kids. So, too, does the occasional vulgarity it contains, though such talk will not strike viewers as gratuitous given the realistic context. Appropriate for adults, the film’s educational value makes it probably acceptable for older adolescents as well.

In theory, at least, Schwarz and Clusiau can be commended for attempting to address immigration issues comprehensively. The subjects they examine include wage theft from construction workers, the deportation of military service personnel and tensions between ICE officials and local police.

All this is potentially edifying. Yet the constant shifting from one topic to the next ultimately proves frustrating because the audience loses track of many of those profiled. A narrower focus would have led to a more consistently gratifying and emotionally effective film.

Still, despite its flaws, including what feels like its excessive length, “Immigration Nation” supplies a sufficient share of memorable scenes to merit viewer attention.

Byrd is a guest reviewer for Catholic News Service