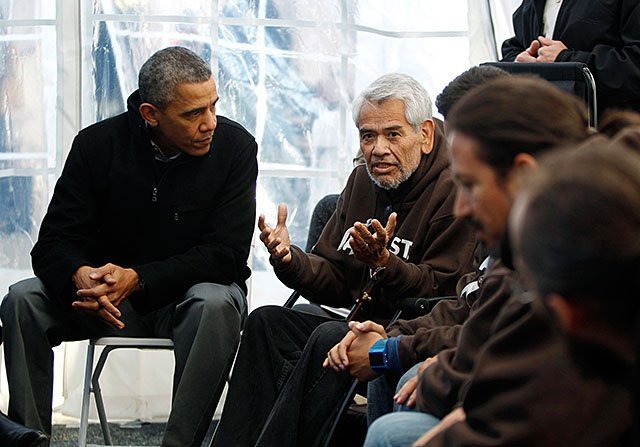 U.S. President Barack Obama listens to hunger striker Eliseo Medina during a Nov. 29 visit with immigration reform advocates in their tent on the National Mall in Washington. Since Nov. 12, advocates for immigration reform who are participating in a "Fast for Families" have abstained from food as they call on Congress to act on reform legislation.

WASHINGTON (CNS) — A year ago, fresh off the November general election in which Hispanic voters were widely credited with tipping the vote to President Barack Obama, advocates were abuzz about the prospects for passing a comprehensive immigration reform bill in the 113th session of Congress.

Among those whose tune about immigration reform changed with the exit poll information was House Speaker John Boehner, R-Ohio, who told reporters a few days after the election that "it’s just time to get the job done."

Twelve months later, with a Senate bill passed but no House action on the horizon, some advocates have continued to sound optimistic notes, albeit while talking about getting reform done in the second half of the 113th congressional session, or maybe after the mid-term elections next November.

Others have sounded the death-knell for any legislation, after Boehner made clear he would not bring the Senate’s bill to the House floor. There’s been no movement for a comprehensive bill written by House Democrats, and little on Republican-sponsored bills dealing individually with border security, employer verification and high skilled immigration.

At a glance, it looks like the dug-in partisanship that has stymied so many other issues on the congressional agenda may also be jamming up immigration legislation.

But the reality of the immigration reform campaign is that it has become such a huge, complex effort that no simple description of all that’s happening is possible.

There are coalitions working together that include groups who normally are not on the same side of many issues: labor unions and the U.S. Chamber of Commerce; high-tech employers and farmers; civil liberties activists and evangelicals.

In the past few months, reform leaders — especially people focused on stopping deportations and those who would be affected by the DREAM Act, legislation aimed at legalizing young adults who were brought to the U.S. as children — have become more confrontational, apparently taking cues from the civil rights era.

Catholics have for decades been at the forefront of support for immigration reform.

Advocates for the U.S. Conference of Catholic Bishops, the Catholic social justice lobby Network, the leadership organizations for men and women religious, and many religious orders have long been a part of public and behind-the-scenes advocacy for comprehensive reform.

That’s usually described as including a chance at legalization with a path to citizenship for the estimated 11 million immigrants in the country illegally; major redesign of family- and employment-based immigration rules; provisions for temporary workers in agriculture and other industries; and targeted measures to control the borders.

But a feature of current efforts is the coalition of evangelicals — not among the major players in previous campaigns — who have been targeting individual Republican members of Congress with local advertising campaigns pressing them to get on board.

Currently, the most visible faith-based work for immigration reform may be the Fast for Families. Beginning Nov. 12, a large tent on the National Mall has hosted daily advocacy in the form of prayer and fasting. Signs, photos, letters and small shrines in the tent have told the stories of families broken apart by deportation and immigration status.

People fasting for a day or two or long-term and other supporters have been staffing the tent daily, praying and discussing the reality of immigrants, particularly families, with anyone stopping by.

The brown, hooded sweatshirts worn by those fasting evoke the robes of Franciscan friars. Friars and laypeople associated with the Franciscan Action Network have been a daily presence on the Mall.

Around the country, Catholic parishes, colleges and whole dioceses have sponsored solidarity prayer services, fasting and education programs. The tent-based presence on the Mall was to end Dec. 12, as Congress prepared to leave for the Christmas break. But organized fasting and prayer will continue.

In May and June, the "Nuns on the Bus" tour focused on immigration reform crossed the country from New York to Florida, across the South and Southwest to Northern California. In venues large and small, the women religious and their companions talked about the situations of immigrants and urged people to phone and write to their members of Congress urging action.

In late November and early December, attention also was focused on the Obama administration, with letter-writing and more aggressive measures to try to slow the pace of deportations. Approximately 1,100 people a day are deported.

On Dec. 11, a group knelt and prayed the rosary outside the Philadelphia offices of the Immigration and Customs Enforcement office under a banner reading "Not One More Deportation."

Several times in 2013, major public actions in support of reform were held around the country.

At the close of an October rally in Washington, those arrested for civil disobedience included icons of the civil rights campaigns of the 1960s, including Rep. John Lewis, D-Ga., who worked with the Rev. Martin Luther King Jr.

Rev. King’s daughter, the Rev. Bernice King, gave a resounding testimony to the power of prayer in pursuit of political change at an early December event at the Fast for Families tent.

Elsewhere, activists have blockaded buses full of people being deported; staged sit-ins at the offices and homes of Republican leaders; waylaid Boehner at his favorite diner and attempted to deliver to him Thanksgiving turkeys and California wine produced by immigrants, along with letters from children seeking protection from deportation for their parents.

While Boehner refused to meet with the advocates, much was being read into his hiring in early December of Rebecca Tallent. Previously, Tallent was Republican Sen. John McCain of Arizona’s chief adviser on immigration, notably working closely with the staff of the late Sen. Ted Kennedy, D-Mass., to draft an earlier version of comprehensive reform legislation.

Rep. Luis Gutierrez, D-Ill., the most prominent House advocate for comprehensive reform, laid out an optimistic, but somewhat refocused idea of how reform might happen at a Dec. 5 event honoring organizations for their efforts at immigrant integration, sponsored by the Migration Policy Institute.

Gutierrez said "it’s time to change the conversation about how we go into immigration reform."

He acknowledged that the House was unlikely to consider a comprehensive bill, but said much could be accomplished in conference committee with the Senate, once the House passed less ambitious bills. He seemed willing to concede that legislation might not include a path to citizenship, long considered an essential piece of reform.

"Eventually," he said, the chance for undocumented immigrants to become citizens "will happen. There’s simply no precedent in U.S. history for them to not eventually be embraced."

He said shifting demographics will one day bring enough force to bear on Congress to ensure that citizenship is available to all. In the meantime, he said, "Democrats have to put policy ahead of politics."

"We can’t hold onto an all-or-nothing strategy."

As for Republicans, Gutierrez said, they "have to get past their nothing or nothing strategy." So far, the Republican congressional approach to immigration reform has consisted largely of saying what they don’t want, he said.

While that might work for members of Congress facing re-election in districts where voters apparently agree with their opposition to reform, Gutierrez said, it’s not a realistic long-term strategy for the Republican Party.

He chided both parties for not supporting members who have tried to work across party lines on immigration reform.

"I’m going to negotiate," he said. "I wasn’t sent to Congress to give speeches and be defiant. We have an obligation to work together."