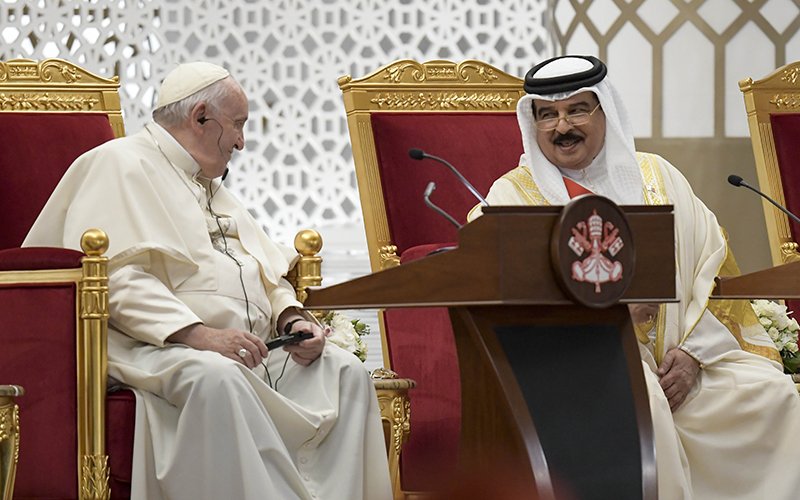 Pope Francis and Bahrain's King Hamad bin Isa Al Khalifa smile at each other during the king's official welcoming ceremony for the pope Nov. 3, 2022, at Sakhir Palace in Awali, Bahrain. (CNS photo by Vatican Media)

Pope Francis set to be first pope to visit Bahrain

AWALI, Bahrain (CNS) — Commitments to protect tolerance and religious freedom need to be put into practice constantly so that these rights may be fully experienced, Pope Francis said.

This is important “so that religious freedom will be complete and not limited to freedom of worship; that equal dignity and equal opportunities will be concretely recognized for each group and every individual; that no forms of discrimination exist; and that fundamental human rights are not violated but promoted,” he said Nov. 3, addressing King Hamad bin Isa Al Khalifa, other government authorities and diplomats serving in Bahrain.

The meeting with political and cultural leaders in the vast marble-paved courtyard of the royal family’s Sakhir Palace in Awali came shortly after the pope landed in Bahrain for his 39th international trip in his nearly 10-year papacy. He is the first pope to visit this archipelago nation in the Persian Gulf, where the highlights will be meeting the small, predominantly expatriate Christian community and promoting the importance of interreligious dialogue.

On his first day, he focused on addressing local authorities and diplomats, touching on both national and global concerns, and how everyone, especially governing leaders, must respond in ways that serve the common good.

He came to this Muslim-majority nation, whose residents are predominantly foreign workers from many parts of the world, to nurture a firmer commitment to human fraternity and peaceful coexistence.

People need to offer and embrace every opportunity for “encounter between civilizations, religions and cultures,” he said. “Let us work together” to serve “togetherness and hope.”

The pope praised the many conferences and initiatives the Kingdom of Bahrain promotes for bringing people together on the themes of respect, tolerance and religious freedom.

The nation’s constitution forbids discrimination “on the basis of sex, origin, language, religion or creed,” and it upholds the freedom of conscience and worship, he said.

And yet, these principles and promises must be put into practice constantly so that these freedoms are “complete” and human rights are protected, the pope said. The most important of these is the right to life for everyone, “including those being punished, whose lives should not be taken.”

According to the U.K.-based Bahrain Institute for Rights and Democracy, “Bahrain’s use of torture and the death penalty have drastically escalated (600%) since the Arab Spring protests in 2011, despite the government’s promises of human rights reform.”

More than 50 people have been sentenced to death since 2011; almost all of them were convicted of terrorism charges, and all of them alleged torture, a 2021 BIRD report said. Another 26 men are currently on death row, with some alleging their convictions were based on false confessions after torture. Half of them are connected to political opposition.

In his address, the pope also put the spotlight on the need to protect workers from unemployment and “dehumanizing” work, which has been another concern by human rights groups. Human Rights Watch has flagged the abuses inherent in the country’s work visa sponsorship system, which gives employers excessive power over their foreign employees.

Pope Francis also called for an end to “the monstrous and senseless reality of war,” which sows destruction, crushes hope and brings out the worst in people: selfishness, violence and dishonesty, which, in turn, “brings in its wake the death of truth.”

He repeated three times a heartfelt appeal for an end “to the clash of weapons” in the “forgotten war” in nearby Yemen.

“I am here today as a believer, as a Christian, as a man and as a pilgrim of peace, because today, more than ever, we are called, everywhere, to commit ourselves seriously to peacemaking,” he said.

In his formal greeting to the pope, the king said they were confident the visit would “leave a great moral and spiritual imprint in the souls of those who love you in the Gulf region and in the Arab world.”

The king praised the pope’s impact and his “tangible faith, which we share, in the role of dialogue and communication” among people of faith, “united by the monotheistic message and spreading the word of truth and the will to reform.”

The pope arrived Nov. 3 at the Sakhir air base after telling reporters traveling with him that his Nov. 3-6 visit would be an “interesting trip,” but that the pain in his knee was worse than usual. While able to stand for short periods of time, the pope used a wheelchair for getting from place to place his first day.

While journalists exited the plane using stairs as usual, the pope entered the airport through a jetway, where girls tossed flower petals as he passed in his wheelchair. Once he arrived in the airport VIP meeting room, he was greeted by the king and Crown Prince Salman bin Hammad Al Khalifa, who is the country’s prime minister and the king’s eldest son.