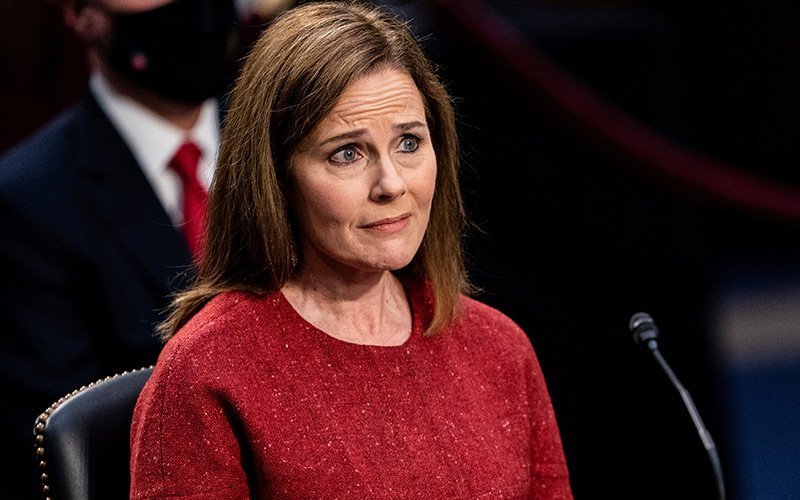 Judge Amy Coney Barrett of the U.S. Court of Appeals for the 7th Circuit, President Donald Trump's nominee for the U.S. Supreme Court, speaks during the second day of her confirmation hearing before the Senate Judiciary Committee on Capitol Hill in Washington Oct. 13, 2020. (CNS photo by Erin Schaff/Pool via Reuters)

On the fourth day of confirmation hearings for Supreme Court nominee, Judge Amy Coney Barrett, the Senate Judiciary Committee, with objections from Democratic members, said they would vote on Barrett’s nomination Oct. 22.

The four days of hearings involved a day of introductory remarks, two days of questioning Barrett and a final day of witnesses brought in by Republicans, who emphasized her qualifications for the role, and a panel of witnesses assembled by Democrats who focused on the impact they said Barrett’s possible decisions could have on either dismantling the Affordable Care Act or overturning Roe v. Wade.

During the two days of questioning from members of the Senate Judiciary Committee, Barrett made a clear distinction between policy preferences and legal precedents.

She also did not give direct answers on how she would vote on top issues but assured the senators that she would follow the rule of the law.

“My policy preferences are irrelevant,” she said, Oct. 13 when asked if she had intended to dismantle the Affordable Care Act, and she reiterated this same view when asked about abortion and same-sex marriage.

On the opening day of the hearings, Republican senators had adamantly emphasized that Barrett’s Catholic faith should not be a factor in questioning, and on the start of the first day of this inquiry, it clearly wasn’t a topic, although it was mentioned, even in opening remarks by Sen. Lindsey Graham, R-South Carolina, committee chairman.

He asked if Barrett would be able to set aside her religious beliefs to fairly decide legal cases, which she said she could.

When asked what she thought about the nomination, Barrett, in a rare moment of candor, said she has “tried to be on a media blackout” for the sake of her mental health but that she was aware of the “of the caricatures that are floating around” about her.

She said she has made her own choices professionally and personally with balancing her career and her family of seven children. “I have a life brimming with people who’ve made different choices, and I’ve never tried in my personal life to impose my choices on them and the same is true professionally.”

She said in the short amount of time she and her husband had to decide if she would accept the nomination, they both knew “our lives would be combed over for any negative detail.”

“We knew that our faith would be caricatured,” she added, and they would have to determine if those challenges would be worth it.

She said her reason for moving forward with this process is that she is “committed to the rule of law and the role of the Supreme Court and dispensing equal justice for all.”

Sen. Dianne Feinstein, D-California, the ranking member of the committee, asked Barrett about abortion, specifically if she agreed with Justice Antonin Scalia’s opinion that the Roe v. Wade decision that legalized abortion was wrongly decided. Barrett declined to answer, saying that as a sitting judge, she wasn’t going to grade precedent with a “thumbs-up or thumbs-down.”

Feinstein expressed some frustration saying: “It’s distressing not to get a straight answer,” on a topic that affects millions of women and where Barrett could be “a very important vote.” In response, Barrett said she understood why the question was raised but reiterated that she “can’t pre-commit” to how she might vote or what her personal views are.

“I have no agenda to try to overrule Casey,” she said about the 1992 court decision, which said states may not enact abortion regulations that place an “undue burden” on pregnant women seeking an abortion.

When asked about the court’s 2015 Obergefell decision that legalized same-sex marriage, Barrett again said she has “no agenda” and added that she has “never discriminated on the basis of sexual preference.” She also noted that challenges to that decision were not likely to come to the Supreme Court.

Later that day, after Sen. Mazie Hirono, D-Hawaii, said the term “sexual preference” has a negative connotation suggesting that sexual orientation is a choice and does not need legal protections, Barrett said she “would never mean to use a term that would cause any offense in the LGBTQ community, so, if I did, I greatly apologize for that.”

The nominee pointed out that hot-button issues don’t just arrive at the Supreme Court without a long process starting with a challenge in lower courts and she also stressed that judges can’t impose their own views on decisions, which some committee members expressed skepticism about.

“Judges can’t just wake up one day and say, ‘I have an agenda. I like guns, I hate guns, I like abortion, I hate abortion,’ and walk in like a royal queen and impose their will on the world,” Barrett told the committee. She also assured them that even though she has praised mentor, Justice Scalia, she was not going to follow in his exact footsteps.

Sen. Patrick Leahy, D-Vermont, participating remotely in the hearing, asked Barrett about an anti-abortion statement she signed in 2006. He said the group that sponsored the statement also had said in vitro fertilization was akin to abortion and he asked if she also held that view.

Barrett responded that she has never “expressed a view on it, and for the reasons I’ve already stated, I cannot take policy positions or express my personal views before the committee.”

When he asked if she would recuse herself from any dispute arising from the 2020 election, she said she has “made no pre-commitments to anyone about how I would decide a case.”

She also said she was not “hostile to the ACA,” in response to Sen. Dick Durbin, D-Illinois, questioning her about comments she made as a college professor that were critical of Chief Justice John Roberts’ reasoning on previous ACA cases.

Democratic senators said their concern about how she would vote stemmed from President Donald Trump’s own words promising that he would pick a judge who would side with him.

Barrett assured the committee members that she had not spoken with the president about specific cases and made “no commitment” to the White House or senators on how she would rule on major cases on the Affordable Care Act, abortion or election disputes.

There was not much mention of Barrett’s faith during the Senate committee’s questioning, despite Republican senators’ criticism in saying at the start that her strong beliefs would be highlighted by Democrats as a potential concern for her fitness for the role of Supreme Court.

Republican Sens. Josh Hawley of Missouri and Mike Lee of Utah mentioned her Catholicism and highlighted cases where the court has ruled in favor of religious liberty. Hawley said these cases show it is “vital that religious rights be respected” and added that he hopes she would “respect that precedent moving forward, and I don’t see any reason to think you won’t.”

On Oct. 14, Graham started the hearing by saying it was the “first time in American history that we’ve nominated a woman who’s unashamedly pro-life and embraces her faith without apology,” adding what Barrett has emphasized, that she would set aside personal views to decide cases fairly.

Throughout the hearings, senators submitted letters of support or concern about Barrett’s confirmation. On Oct. 13, an open letter to Barrett signed by 100 Notre Dame professors was published online urging her to put a “halt” to the nomination process until after election. The letter emphasized that this would allow “voters to have a choice” in the next judge on the nation’s high court.

After the committee’s vote, Senate Majority Leader Mitch McConnell, R- Kentucky, will then determine when to move the nomination to the Senate floor for a vote, which is expected to take place the week of Oct. 26, just days before the election.