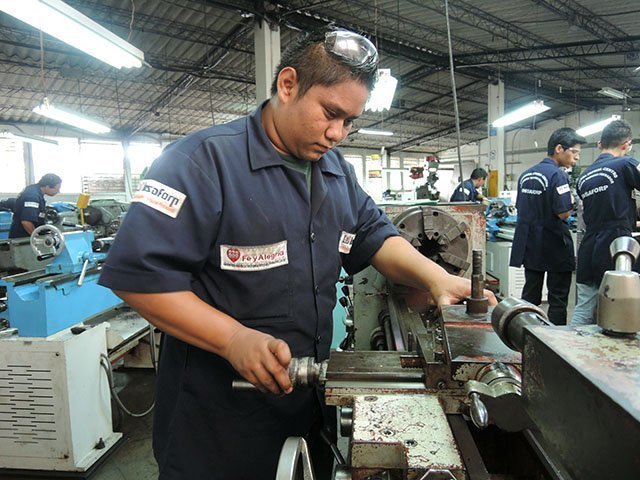 A metalworking student uses a lathe at a Fe y Alegria training center July 2 in San Salvador. The Jesuit educational organization uses training to improve the lives of young men and that might otherwise emigrate.

The soft-spoken 17-year-old vocational student has struggled to stay out of gangs, watched neighbors migrate to the United States and lived through the indignity of criminals threatening and extorting his taxi-driving father, forcing his family to flee their home and join the ranks of the estimated 130,000 internally displaced residents of El Salvador.

But he’s making progress in a Jesuit-run metalworking program and expects to finish with the skills to land a job or start a small business. More importantly, Sandoval said, his new skill offers the opportunity to assist others, including his two teenage brothers, who have hopes of attending college and escaping the pervasive poverty and bad barrios of San Salvador.

"I want to help my family," Sandoval said. "I have two brothers studying. It’s an opportunity. I have to take advantage of it."

Opportunities can be hard to come by in El Salvador and other Central American countries, where a lack of jobs, low wages and insecurity have prompted many young men to leave. Unaccompanied children, too are leaving, hoping to complete the perilous trip through Central America and Mexico in the hope of reaching the United States.

The Jesuit-run educational program, Fe y Alegria (Faith and Joy), attempts to provide alternatives to emigration and gangs through educational and vocational programs, which provide skills for achieving success in both work and life. It also provides psychological assistance for students, tries teaching values that go beyond the workplace and helps students reach for higher goals, such as attending high school and college. Administrators acknowledge it’s no easy task, while success is relative.

"Success for young people here can’t (always) be a university degree. It can be having a job and being able to bring home beans for the family. … It’s very relative," said Alexander Ayala, director of a Fe y Alegria training center in Soyapango, a suburb of San Salvador.

"This is success for many young people: that they can go and get a job, that they know they can help the household," he said. "When they achieve this they can set a higher goal. It’s cyclical."

The center Ayala directs offers courses such as welding, metalworking, mechanics, baking and cosmetology, all of which can allow graduates to work in large or small companies, or start their own small businesses. Some students also pursue high school studies on the weekend. Parents are encouraged to become involved in their children’s studies.

"The advantage that we have is that we allow these young people to change their way of life," Ayala said.

"They’re contributing to the family economy. This brings about a reduction in crime rates," Ayala added. "They’re working so do not do drugs, and they are thinking about finishing high school or pursuing university."

In 1955, Father Velaz started a school in an unfinished building donated by a bricklayer. He called it Fe y Alegria and offered technical training to those in need. Today, Fe y Alegria operates in 20 countries in Latin America, Europe and Africa.

Ayala said that in El Salvador, perhaps 1 percent of the population graduates from college.

Poverty is just one of the problems facing Fe y Alegria students.

Many must deal with gangs, which watch the Fe y Alegria campuses, but have allowed them to operate without incident. Students living an area controlled by one gang can be harassed when traveling to an area controlled by a rival, even if they’re not gang members — something Ayala said contributes to many students dropping out of school.

With an absence of education and economic opportunities, some would-be students head for the U.S. Others join gangs.

"Gangs are a consequence of the lack of opportunities and economic growth," Ayala said.

"If people’s expectations are fulfilled (at home) they don’t have to emigrate because they can be agents of change in the areas where they live," he added.

Sandoval, the student, sees young people leaving for the U.S. in steady numbers, but he plans to stay put even though some people he knows have made it to the U.S. and send home money to buy or build a house. Such stories encourage others to leave.

Metalworking student Ricardo Mejia, 18, also wants to stay in El Salvador, where jobs, even those paying poorly, can be hard to come by.

"It’s helping those of us that can’t pay for university to get ahead," he said of the program.