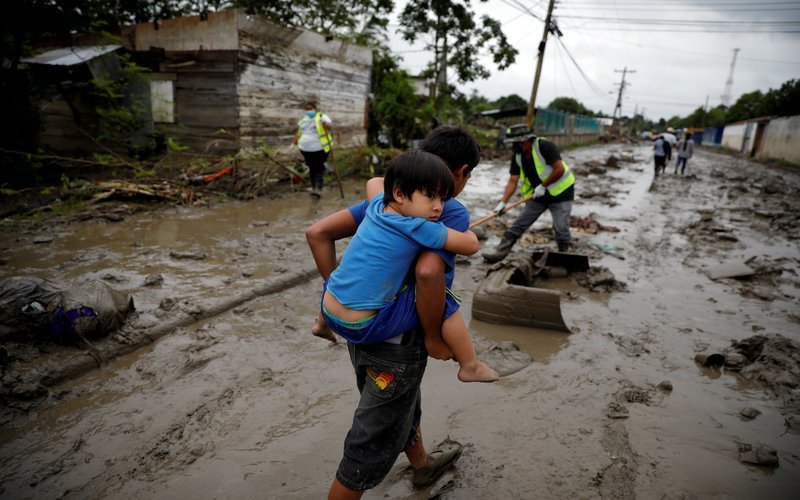 A child in La Lima, Honduras, carries his brother in a street covered in mud Dec. 8, 2020, after flood waters caused by Hurricanes Eta and Iota receded. (CNS photo by Jose Cabezas via Reuters)

The U.S. Department of Homeland Security and the Executive Office for Immigration Review have issued a final rule affecting would-be asylum seekers and others seeking refuge in the U.S. who may have come into contact with the coronavirus.

The final rule, published in the Federal Register Dec. 23, 2020, “will bar from asylum and withholding of removal certain applicants who may have come in contact with COVID-19,” said the Catholic Legal Immigration Network (CLINIC) in a statement voicing its opposition.

Asylum refers “to foreign nationals already in the United States or arriving at the border who meet the international law definition of a ‘refugee'” and the person is “protected from being returned to his or her home country,” according to the American Immigration Council. The organization also said “withholding of removal” refers to a person who “may never leave the United States without executing that removal order, cannot petition to bring family members to the United States and does not gain a path to citizenship”.

In its last days, the Trump administration, which has whittled away at asylum and other similar immigration protections to the U.S., has said it is taking the measures, effective Jan. 22, 2021, “in order to mitigate the risk of aliens bringing a serious communicable disease to the United States, or further spreading it within our country.”

CLINIC, in its statement, said: “The rule conflates public health issues with security issues, using the COVID-19 pandemic as a pretext to bar applicants from asylum and withholding of removal.” Asylum seekers would be barred from relief if they exhibit symptoms or have come into contact with the disease, “punishing vulnerable people for a public health crisis,” the organization said in its statement.

CLINIC said it will monitor the implementation of the rule.