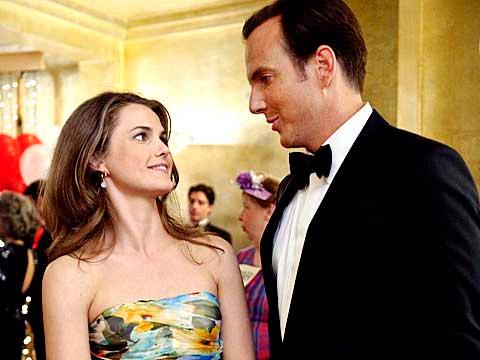 Keri Russell and Will Arnett star in a scene from the TV series "Running Wilde," which premieres Sept. 21 on Fox.

NEW YORK — Starting out nearly 25 years ago as the little network that could, Fox made a name for itself by launching brash and bawdy comedies. Then something happened: quality. Think “The Simpsons,” “The X-Files” and the G-rated appeal of the past decade’s top show, “American Idol.”

Fox still innovates; “Glee,” showered with Emmy nominations, is the most recent example. But not every innovation edifies the viewing public, as professional philandering and sex with death-row inmates — the launching pads for two of its new series — will likely prove.

Morally tangled prime-time soap opera about Robert/Bob Allen (James Wolk), a charismatic con artist who has created two separate lives for himself in different parts of Texas. As “Bob,” he lives in Houston with wife Cat (Adrianne Palicki), the daughter of oil tycoon Clint (Jon Voight), who provides Bob with an entree into her ultra-wealthy Texas family. Miles away in Midland, he’s “Robert,” and lives with girlfriend Lindsay (Eloise Mumford). Thanks to the “guidance” of his father and mentor John (David Keith), Bob has long been able to avoid suspicion or discovery. In the pilot episode, though, his secret lives begin to unravel. We see a moment of potential redemption when Bob announces to his father that both of them need to go straight. Unfortunately, this about-face proves only temporary and, by the premiere’s conclusion, Bob is adding bigamy to his list of indiscretions.

The Score: A multilayered tale but one lacking an ethical core.

The Lowdown: Along with adult situations and semi-graphic sexuality, the lead character habitually lies, cheats and steals.

Crude comedy about a deeply dysfunctional family and their attempts to cope with an unexpected new addition. Jimmy Chance (Lucas Neff), a 23-year-old slacker, still lives at home with his extended clan, including Alzheimer’s-afflicted grandmother “Maw Maw” (Cloris Leachman), parents Virginia (Martha Plimpton) and Burt (Garret Dillahunt) and cousin Mike (Skyler Stone). In the opening episode, Jimmy has a one-night stand with new acquaintance Lucy (Bijou Phillips), little suspecting that this stranger is, in fact, a wanted murderer. Lucy winds up on death row and — with her execution approaching — gives birth to Jimmy’s child. Unlikely dad Jimmy’s determined but floundering efforts to raise baby Hope — despite the initial opposition of his selfish relatives — opens the way for all manner of tasteless humor, culminating in a scene where the task of changing her diaper for the first time causes Jimmy to get sick on the infant.

The Score: The wayward gags are crass and often offensive.

The Lowdown: Off-screen nonmarital sex as well as adult subject matter and language.

Romantically themed comedy centering on Steve Wilde (Will Arnett), a rich oil-company heir and immature playboy who has always managed to get everything he wants in life. Except, that is, for his childhood sweetheart, Emmy Kadubic (Keri Russell), now an ultra-liberal humanitarian who has spent the past several years working in the Amazon rain forest. In the premiere, an expansion of Wilde Oil’s South American enterprise threatens the indigenous tribe with whom Emmy and her 12-year-old daughter Puddle (Stefania Owen) live, so Steve’s old flame — who has never quite gotten over him, either — returns home to convince him to halt the project.

The Score: Quirky comedy playing on such offbeat themes as the self-imposed silence by which Puddle protests against having to grow up in the wild.

The Lowdown: Some adult comedic moments.

Macina is a guest reviewer for Catholic News Service. A former producer in the television and radio department of the Christophers, her work for network TV has garnered her multiple Daytime Emmy nominations.