In Holy Year, pope wants to share experience of mercy he had as teen - Catholic Courier 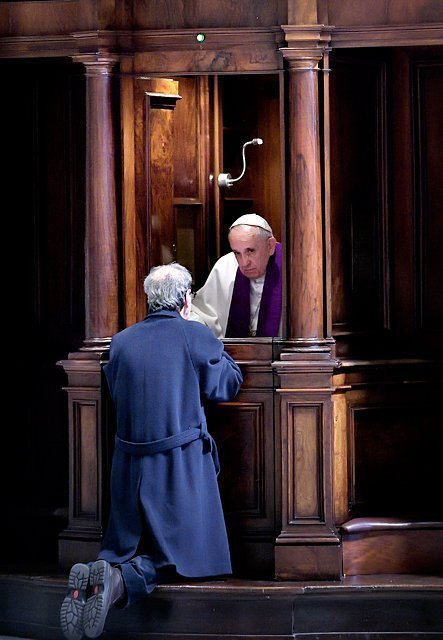 VATICAN CITY (CNS) — Pope Francis’ decision to convoke a special Holy Year of Mercy has its roots in the event that led a teen-age Jorge Mario Bergoglio to the priesthood.

Pope Francis has recounted the story several times in the past two years. On one occasion early in his pontificate, he told members of Catholic lay movements about his faith journey, particularly the importance of growing up Catholic and the influence of his grandmother. Then he said:

"One day in particular, though, was very important to me: Sept. 21, 1953. I was almost 17. It was ‘Students’ Day,’ for us the first day of spring — for you the first day of autumn. Before going to the celebration I passed through the parish I normally attended, I found a priest that I did not know and I felt the need to go to confession. For me this was an experience of encounter: I found that someone was waiting for me. Yet I do not know what happened, I can’t remember, I do not know why that particular priest was there whom I did not know, or why I felt this desire to confess, but the truth is that someone was waiting for me. He had been waiting for me for some time. After making my confession I felt something had changed. I was not the same. I had heard something like a voice, or a call. I was convinced that I should become a priest."

Over and over again, Pope Francis tells people: God is always there first, waiting for you; the sacrament of confession is an encounter with the merciful God who is always ready to forgive those who seek pardon; and recognizing how merciful God has been with you should make you merciful toward others.

The pope frequently talks about Caravaggio’s painting of the "Calling of St. Matthew"’ — a tax collector. And he chose his motto from the Venerable Bede’s homily on the Gospel story where Jesus sees Matthew, says "follow me," and Matthew does.

The pope’s motto is "miserando atque eligendo," which St. Bede used to describe Matthew, calling him "wretched, but chosen."

Talking about the call of Matthew, Pope Francis told young people in the Philippines in January, "That morning, when Matthew was going off to work and said goodbye to his wife, he never thought that he was going to return in a hurry, without money, to tell his wife to prepare a banquet. The banquet for the one who loved him first, who surprised him with something important, more important than all the money he had."

Irish Jesuit Father James Corkery, a professor at Rome’s Pontifical Gregorian University, said the pope’s Jesuit training, specifically through the Spiritual Exercises of St. Ignatius of Loyola, built on his experience of mercy as a young man.

While the text of the Spiritual Exercises seldom uses the word "mercy," Father Corkery said the concept is clear in repeated uses of the words "gratitude," "wonder" and even "shame."

"The whole movement of the first week is to enable the person to realize they haven’t been great, but they are loved — like, amazingly loved," he said. The experience helps the person "lean back into God’s mercy and kindness," accepting while knowing it is undeserved.

St. Ignatius "gets you to reflect on how you haven’t been perfect and then he gets you to be filled with wonder and awe that the Lord could show you all this kindness," Father Corkery said. "Ignatius has an immense sense that God did something for him and that links up with the consciousness of mercy."

Pope Francis’ motto, "wretched, but chosen," shows that Pope Francis and St. Ignatius are on the same page when it comes to being overwhelmed by God’s goodness and mercy, the Irish Jesuit said.

Another point in St. Ignatius’ teaching and one Pope Francis often repeats, he said, is that while human beings are sinful, "we don’t need to languish in that" because God has forgiven us and is calling us to move on.

At the March 13 penance service announcing the Holy Year, Pope Francis gave a homily on the Gospel story of the sinful woman who washed Jesus’ feet with her tears and dried them with her hair. "Thanks to Jesus," the pope said, "God threw her many sins over his shoulders and remembers them no more. That is because this is true: when God forgives, he forgets."

The Holy Year, he said, should be a time of "joy to rediscover and make fruitful the mercy of God" by reaching out and offering "consolation to every man and every woman of our age."

Pope Francis, Father Corkery said, is "absolutely unbridled" in the way he speaks about mercy, including the task of all Christians "to be portals of mercy for anyone who seeks it."

"He wants no lack of generosity," he said. "That’s the song he’s singing and he’s not going to stop, as we know. That’s the year he’s called."

The Jesuit said the pope knows from his own experience that "you would be stuck, you would not be able to move forward, if you did not know there was mercy at your back." And for Pope Francis, moving on and reaching out are key.

"Why not accept a flood of mercy from God and then drench other people with the same — I think that’s his idea," Father Corkery said. "Don’t be stingy, not with mercy."