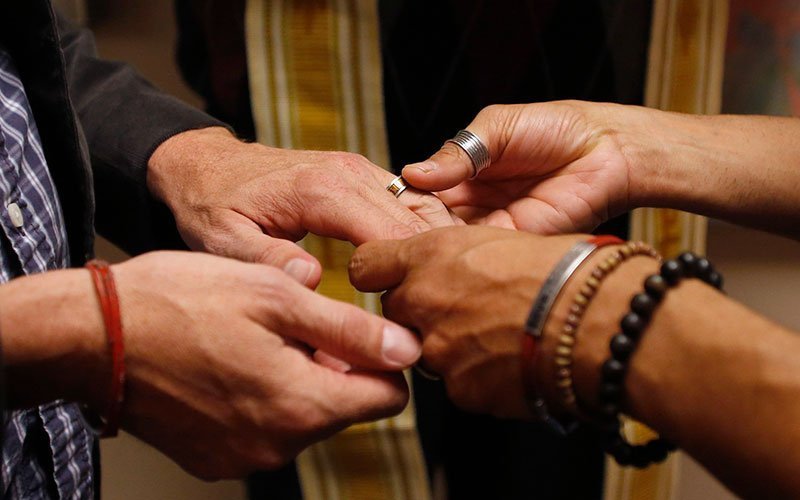 A same-sex couple is pictured in a file photo exchanging rings during a ceremony in Salt Lake City. In a new documentary, Pope Francis expressed openness to the idea of laws recognizing civil unions, including for gay couples, to protect their rights.(CNS photo by Jim Urquhar, Reuters)

VATICAN CITY (CNS) — Pope Francis often has expressed openness to the idea of laws recognizing civil unions, including for gay couples, to protect their rights.

The pope’s comments in a brief passage in the documentary film, “Francesco,” are similar to the position he took while archbishop of Buenos Aires and echo remarks he has made in several interviews during his pontificate: “Marriage” is only between a man and a woman, but civil union laws could provide legal protection for couples in long-term, committed relationships.

Speaking in Spanish in the film, Pope Francis says, “Homosexual people have a right to be in a family. They are children of God and have a right to a family. Nobody should be thrown out or be made miserable over it. What we have to create is a civil union law. That way they are legally covered.”

The film premiered in Rome Oct. 21.

Pope Francis repeatedly has said publicly that parents should not and must not disown a child who is gay, and, on several occasions, he has spoken about the rights all people have to have a family.

In a 2019 interview on Mexican television, he was asked about his opposition to gay marriage in Argentina and his openness to LGBT people as pope.

“I have always defended doctrine,” he said. “It is a contradiction to speak of homosexual marriage.”

In “A Future of Faith: The Path of Change in Politics and Society,” a book-length series of conversations with the French sociologist Dominique Wolton, the two spoke about gay marriage and civil unions in the context of a discussion about tradition, modernity and truth.

“‘Marriage’ is a historical word,” the pope said, in the book published in French in 2017. “Forever, throughout humanity and not only in the church, it’s been between a man and a woman. You can’t change it just like that. It’s the nature of things. That’s how they are. So, let’s call them ‘civil unions.'”

In a 2014 interview published in the Italian newspaper Corriere della Sera, Pope Francis was asked about moves across Europe to legalize gay marriage or adopt civil union laws.

“Marriage is between a man and a woman,” he said. “Secular states want to validate civil unions to regulate different situations of cohabitation, driven by the need to regulate economic aspects between people, such as ensuring health care. These are cohabitation pacts of various kinds, of which I could not list the different forms.”

“It is necessary to see the different cases and evaluate them in their variety,” he said, implying that some forms of civil unions would be acceptable.

According to “The Great Reformer,” a biography of Pope Francis by Austen Ivereigh, then-Archbishop Jorge Mario Bergoglio went head-to-head with the government in 2010 when it began a drive to legalize gay marriage.

“He told a Catholic gay activist, a former theology professor named Marcelo Marquez, that he favored gay rights as well as legal recognition for civil unions,” Ivereigh wrote. “But he was utterly opposed to any attempt to redefine marriage in law.”

The future pope, the book continued, “had not raised strong objections to a 2002 civil unions law that applied only to Buenos Aires and that granted rights to any two people cohabitating for more than two years, independent of their gender or sexual orientation. He regarded it as a purely civic, legal arrangement that left marriage unaffected.”

In 2003, the Congregation for the Doctrine of the Faith had issued a document urging Catholics to oppose giving “legal recognition to unions between homosexual persons,” particularly when such recognition would equate the unions with marriage and would allow the couple to adopt children.