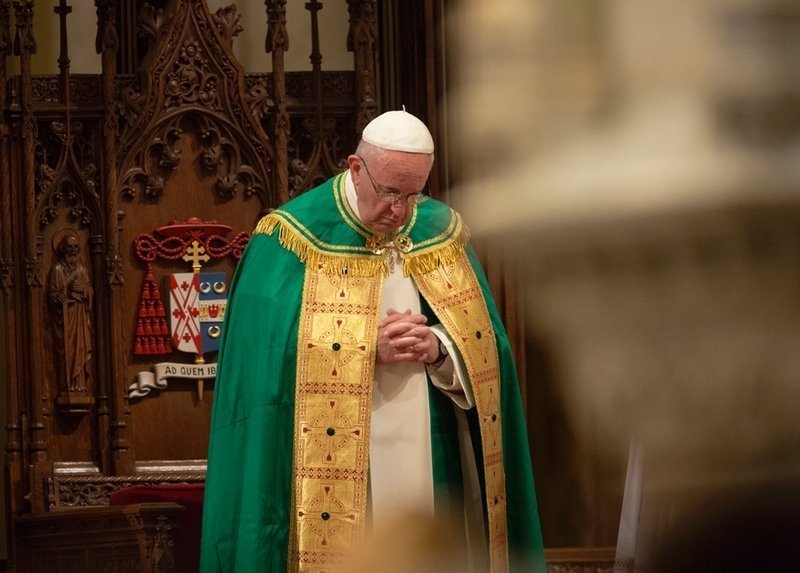 Pope Francis bows his head in prayer during an evening prayer service at St. Patrick's Cathedral in New York Sept. 24.

NEW YORK (CNS) — During an evening prayer service at St. Patrick’s Cathedral in New York, Pope Francis thanked the nation’s priests, brothers and women religious for their service and gave particular thanks to women religious saying, "Where would the church be without you?"

The pope began with unscripted remarks, extending his sympathy to the Muslim community for the stampede in Mecca, Saudi Arabia, that killed more than 700 people that morning. He offered his "sentiments of closeness in face of tragedy" and his assurance of his prayers. "I unite myself with you," he added.

The pope arrived by popemobile at St. Patrick’s Sept. 24 after traveling from Washington. He encouraged those with religious vocations and also acknowledged the pain of the clergy sexual abuse crisis in the church saying, "You suffered greatly in the not distant past by having to bear the shame of some of your brothers who harmed and scandalized the church in the most vulnerable of her members."

He said he wished to accompany them "at this time of pain and difficulty."

Although the pope was speaking in Spanish, a translation of his remarks was posted on large screen TV. The congregation applauded his remarks about women religious in the United States, whom he described as women of strength and fighters and said their "spirit of courage" puts them "in the front lines in the proclamation of the Gospel."

"To you, religious women, sisters and mothers of this people, I wish to say thank you, a big thank you, and to tell you that I love you very much."

Speaking to all in the cathedral, he told them: "I know that many of you are in the front lines in meeting the challenges of adapting to an evolving pastoral landscape. Whatever difficulties and trials you face, I ask you, like St. Peter, to be at peace and to respond to them as Christ did: He thanked the Father, took up his cross and looked forward."

The pope urged those in religious life to be thankful for their many blessings and graces and encouraged them to continue their "spirit of hard work" without getting caught up in "spiritual worldliness" or simply being efficient, which he said can weaken one’s commitment to serve and also "diminishes the wonder of our first encounter with Christ."

The pope gently reminded the priests and religious men and women that they have "been entrusted with a great responsibility, and God’s people rightly expect accountability from us."

He also said they need to view their apostolate "by the value it has in God’s eyes" which calls for "constant conversion" and great humility remembering that their job is to plant the seeds and God will see to "the fruits of our labors."

Pope Francis even warned the priests and religious against surrounding themselves with "worldly comforts," which they might say would help them serve better. The danger with that, he said, is it slowly but surely "diminishes our spirit of sacrifice, renunciation and hard work. It also alienates people who suffer material poverty and are forced to make greater sacrifices than ourselves."

"Rest is needed, as are moments of leisure and self-enrichment, but we need to learn how to rest in a way that deepens our desire to serve with generosity. Closeness to the poor, the refugee, the immigrant, the sick, the exploited, the elderly living alone, prisoners and all God’s other poor, will teach us a different way of resting, one which is more Christian and generous," the pope said.

At the close of the prayer service, New York Cardinal Timothy M. Dolan welcomed the pope to St. Patrick’s Cathedral and said that once he came through the doors he "became an official New Yorker," even though "you already have a home in our hearts and souls."

He told the pope that in the past three years the cathedral, built in 1879, has been going through major renovation, which he likened to the spiritual renewal the pope has asked. "Your presence renews all of us," he added, urging him to stop by again.

Those in attendance, who included religious and laity from the New York Archdiocese, had waited for several hours in the cathedral for the vespers, or evening prayer.

William Lacerenza of New Rochelle, New York, and his wife, Daniella Raciti-Lacerenza, said the pope has a lot that resonates with New Yorkers.

"He’s a little controversial and I like that. You have to rock the boat sometimes," said Daniella Raciti-Lacerenza.

William Lacerenza said that as someone who comes from a family of immigrants, even a few generations removed, "it’s a humble reminder" when the pope points out about the immigrants who helped build this country.

"It resonated with me," he said, and it’s something that a lot of New Yorkers and Americans can identify with, he said.

Even a city that has lot of riches appreciates what the pope is asking of the world, he said.

"He tells us that we have to look out for the poor." Even people who are wealthy are receptive to the pope’s message, he added: "It’s not lost on them."

Contributing to this report was Rhina Guidos.

Tags: NY Catholics, Pope Francis, Religious Orders
Copyright © 2023 Catholic News Service, Inc. All rights reserved. Linking is encouraged, but republishing or redistributing, including by framing or similar means, without the publisher's prior written permission is prohibited.