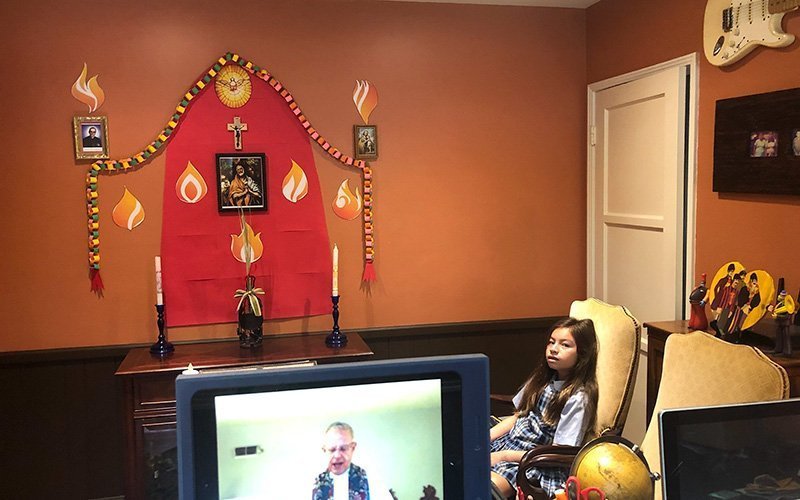 This is the first in a series of year-ending stories from Catholic News Service.

WASHINGTON (CNS) — As the coronavirus pandemic upended normal activities and routines across the United States, Catholic parishes, schools and organizations had to quickly, and continuously, find ways to adapt.

For starters, this primarily involved technology: livestreaming Masses and teaching and meeting on Zoom platforms, but it also prompted outdoor worship, drive-thru confessions and, as the year went on: a return to socially distanced in-person Masses and classes at Catholic schools and colleges, with reduced crowd sizes.

When the pandemic first hit and dioceses around the country closed churches and bishops issued dispensations for the Sunday Mass obligation, parishes — with varying degrees of technical know-how — set up parish YouTube channels for the first time or dusted off their Facebook pages for online streaming.

Father Ken Gill, pastor of Our Lady Star of the Sea Parish in Solomons, Maryland, met with his parish staff after the Archdiocese of Washington announced there would be no public Masses as of March 14 and asked: “What can we do to stay connected?”

They decided that with the proper equipment, the parish could begin livestreaming Masses, so the pastor bought a laptop, a microphone and a camera, and a parishioner helped him set up the connection to livestream daily Masses four days later.

By the next week he was broadcasting a noontime holy hour, praying the Angelus, the rosary, the Divine Mercy chaplet and Benediction with viewers and planning to livestream Stations of the Cross on the parish Facebook page.

“We’re using this opportunity to foment and create a stronger bond of community,” he said.

This happened at many parishes across the country and continued once churches slowly reopened because Mass congregation sizes have been limited.

Mary DeTurris Poust, director of communications for the Diocese of Albany, New York, said in late March she was inspired by what parishes were doing, saying they realized their parishioners were “hungry for spiritual connection and for the grounding nourishment liturgy can provide at this really critical and chaotic time.”

Parish closures also meant functions such as religious education classes and meetings had to move to an online format, getting many people familiar with Zoom, an online platform they might not have heard of a year ago.

“The internet is the blessing of all blessings” right now, Sister Susan Francois, an assistant congregation leader for the Sisters of St. Joseph of Peace, told Catholic News Service. She has held Zoom video conference meetings with team members across the country and in other parts of the world.

But Zoom fatigue also set in. Bishop Barry C. Knestout of Richmond, Virginia, used the platform a lot this past year with meetings, conferences and diocesan functions including a diocesan eucharistic congress in early November. After taking part in the U.S. bishops’ virtual fall meeting in mid-November, he acknowledged that “looking at computer screens is very draining.”

“Technology is a blessing,” because it enables people to do more, he said, but “it also has its limits,” noting people are meant for in-person encounters, which he said is what the sacraments are about and where grace comes in.

With fewer limits on congregation sizes outdoors, many parishes attempted to keep in-person outdoor gatherings, such as Masses, when possible, often in church parking lots, with congregants in their cars, listening on a radio channel.

In May, Larry and Diane Kahlscheuer, parishioners of Stella Maris Parish in Egg Harbor, Wisconsin, asked their pastor if he could offer Communion services at their home. And in June, when the Diocese of Green Bay announced resumption of public Masses at 25% church occupancy, the priest obtained permission from his bishop to celebrate outdoor Sunday Masses in the couple’s yard with social-distancing restrictions.

“Those in attendance bring their own lawn chairs or blankets and sit on the grass,” said Larry told The Compass, the diocesan newspaper. “Part of the diocesan guidelines is the taking of temperatures and a little squirt of hand sanitizer. The priest, during Communion, is sanitized and he distributes Communion. It’s all done (with) the strictest guidelines. People social distance, except for families, on our front lawn.”

The couple said the pandemic has been a challenge for their community, but it also has helped them to understand how important faith is to them.

“This whole COVID-19 situation, during the entire time when churches were shut down, I realized just how much the Eucharist meant to me and how much being fed by word and bread meant to my faith life,” said Larry. “I’m a believer that I became stronger during this time. It’s been quite a nice walk to go through despite what this whole situation is about.”

Several U.S. bishops during a Nov. 17 discussion during their virtual meeting this fall said they have seen an unwavering thirst for the Eucharist and spoke of extraordinary measures people have taken to worship before the Blessed Sacrament.

Bishop Daniel E. Flores of Brownsville, Texas, said he has seen people kneeling outside churches, praying for the chance to receive holy Communion. Similarly, Bishop Kevin W. Vann of Orange, California, said he saw people kneeling in the rain early one morning waiting for the city’s cathedral to open.

Several bishops said such yearning for the Eucharist presents an opportunity for the church to begin a new effort of evangelization and catechesis as the public celebration of Mass gradually expands and church leaders determine how best to encourage people to reengage in parish life.

At this virtual bishops’ meeting and in a survey this summer by the Center for Applied Research in the Apostolate at Georgetown University, the bishops expressed concern about people returning to Sunday Mass after the pandemic and noted that without their return, the financial outlook for church entities — parishes and schools — was grim.

Catholic schools have seen this firsthand, with more than 100 schools closing this year, many because of financial stress, worsened by the coronavirus pandemic.

But this fall, many Catholic schools — often with smaller enrollments than public schools — were able to reopen for in-person education with a number of health and safety protocols in place along with sneeze shields and plenty of hand sanitizers, disinfecting wipes, face masks and gloves.

For younger students, recess also was different, with students prevented from playing on the equipment or engaging in contact sports. School lunches were either delivered to the classroom or grab-and-go style, with students eating at their desks or outside.

This same creativity and adherence to safety guidelines was practiced at Catholic schools and colleges that reopened in person this fall after being primarily virtual during the spring semester.

On campuses, crowded lecture halls, sporting events and dining halls were no longer the norm and classes were either predominantly online or significantly smaller with separated seating and plexiglass barriers. Dorms were at reduced capacities and primarily singles-only rooms.

The academic calendar also was different. Most colleges started earlier, eliminating fall holidays and ended their in-person session either just before Thanksgiving break or concluding the semester virtually, with online exams, in the first few weeks of December.

Parishes also have been complying with restrictions amid reopening. This summer, in the Diocese of Portland, Maine, the effort to reopen churches, even in a limited fashion, prompted creativity among clergy and parish staff. No more than 50 people could be in attendance, masks were mandatory and temporary pew-seating arrangements ensured social-distancing guidelines were followed. In addition, reservations were required to make sure capacity wasn’t exceeded.

As parishes and schools have taken steps to slowly reopen and the coronavirus pandemic shows signs of worsening before improving, church and school leaders have maintained that the key in all of this is flexibility. They have stressed that reopening requires strict adherence to new protocols and the flexibility to switch gears if necessary.

“We’re really grateful for the patience our faithful parishioners, parish leaders and pastors have shown throughout the pandemic,” he said. “We ask for that to continue because it is such a complex matter and there is no precedent for it. We’ve practically rewritten the entire archdiocesan policy manual over the past five or six weeks. Now, in some senses, we are going to be writing it again.”

Contributing to this report was Mark Zimmermann in Washington, Sam Lucero in Green Bay and Dennis Sadowski in Cleveland.