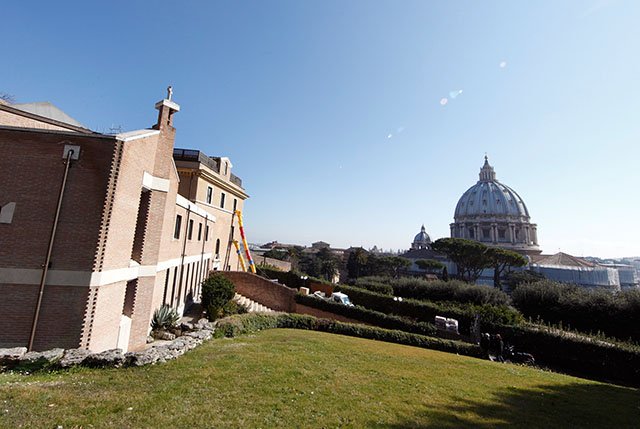 The Mater Ecclesiae Monastery, left, where Pope Benedict XVI now lives, is pictured during remodeling Feb. 19, 2013. The monastery is secluded but has an impressive view of the dome of St. Peter's Basilica.

VATICAN CITY (CNS) — In retirement, Pope Benedict XVI follows a daily schedule similar to that of any retired bishop or religious: He prays, reads, strolls, talks with people and offers them spiritual advice, the Vatican spokesman said.

Although he "lives in a low-key way, without public attention, that does not mean he’s isolated or enclosed in a strict cloister," Jesuit Father Federico Lombardi told Vatican Radio.

Marking the one-year anniversary of Pope Benedict’s resignation Feb. 11, Father Lombardi and Archbishop Georg Ganswein, the retired pope’s longtime personal secretary, spoke about the very normal daily life of a man who is in the unusual position of being a retired pope.

Archbishop Ganswein, who continues as Pope Benedict’s personal secretary while also serving Pope Francis as prefect of the papal household, summarized the retired pope’s day as filled "with prayer most of all, with study, with personal correspondence and visits."

"The day begins with Mass, then with the breviary, followed by breakfast," he told Famiglia Cristiana, a Catholic magazine. "The morning usually is dedicated to prayer and study, to the mail and to receiving guests."

Archbishop Ganswein and the consecrated laywomen who assist the retired pope join him for lunch at 1:30, and a nap always follows, he said. Pope Benedict spends the afternoon dealing with his correspondence and listening to music until 4 p.m., when he and the archbishop recite the rosary while walking in the garden behind the former Vatican convent where he lives. They eat dinner at 7:30 and watch the evening news at 8.

Archbishop Ganswein said Pope Benedict had told him he was retiring long before the Feb. 11 announcement, but under the strictest secrecy. "Instinctively, I said, ‘No, Holy Father, it’s not possible,’ but I realized immediately that he wasn’t communicating something he wanted to discuss, but a decision already made."

The archbishop said the "VatiLeaks" scandal, which saw the publication of confidential papal correspondence and internal Vatican documents, "did not cause or even influence the resignation."

"The pope did not flee a responsibility, but was courageous" enough to realize he no longer had the strength to carry out the papal ministry, he said.

Archbishop Ganswein also confirmed that Pope Francis and Pope Benedict speak frequently on the telephone and have done so since the evening Pope Francis was elected.

"I was in the Sistine Chapel to greet the new pope and promise him obedience," the archbishop said. "Immediately, Pope Francis asked me about Pope Benedict and said he wanted to call him. I dialed the number and handed him the telephone."

Father Lombardi said the pope and the retired pontiff have shown the world that there was nothing to fear with having Pope Benedict live in the Vatican while a new pope reigned. "The fact is that the papacy is a service and not a power," he said. Pope Benedict "fulfilled his service before God and in good conscience passed the witness of this service to another."

As for Pope Benedict’s daily routine, Father Lombardi said it is that of "an elderly religious." He said the retired pope’s guests come for conversation, for dialogue and "ask his advice and spiritual support."