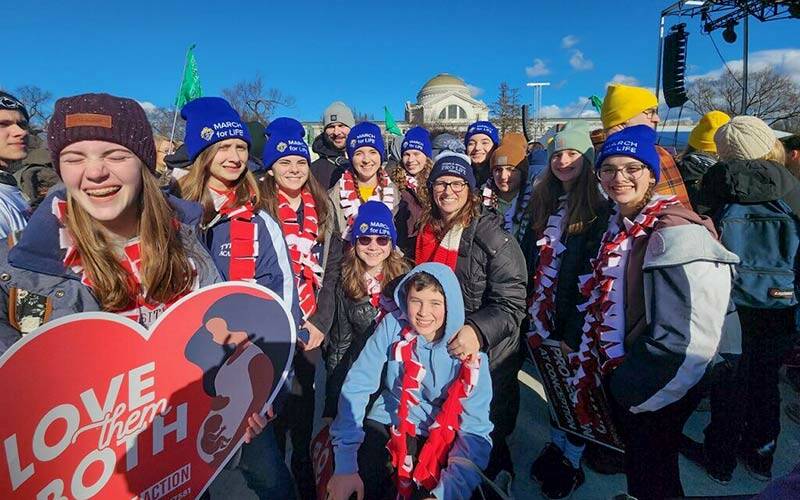 Students from Auburn’s Tyburn Academy pose for a photo during the Jan. 20 March for Life in Washington, D.C. (Photo courtesy of Laurie Faiola)

Bishop Matano presides at Holy Hour for Life in Rochester

Although a 50-year-old federal decision legalizing abortion has been overturned, the effort to protect human life continues — and advocates from the Diocese of Rochester remain committed to that cause.

Two busloads of pilgrims traveled from Penfield’s Holy Spirit Church to the annual March for Life Jan. 20 in Washington, D.C., where they joined tens of thousands fellow pro-life advocates. The 71-member contingent hit the road the night of Jan. 19, returning from its nearly 800-mile round trip slightly more than 24 hours later.

This year’s March for Life took place in conjunction with the 50th anniversary of the U.S. Supreme Court’s 1973 Roe v. Wade decision that permitted abortion in this country. The landmark ruling was reversed in June 2022 in the court’s Dobbs v. Jackson Women’s Health Organization decision, returning regulation and restriction of abortion to state legislatures.

Abortion remains legal in New York state. Gerry Sander, who organized the buses out of Holy Spirit, added that pro-life efforts must continue for both legal and moral reasons.

“Our goal is not simply to abolish abortion, but to make it unthinkable,” he said. “It’s not just at the legislative level, it’s at the hearts and minds level.”

The contingent from Holy Spirit included marchers from a number of area parishes, as well as 24 students and chaperones from Tyburn Academy, a Catholic school in Auburn. They made one stop in Bath, Steuben County, picking up five people at St. Mary Church. Travelers reached the nation’s capital in time for the 8 a.m. closing Mass of the National Prayer Vigil for Life, held at the Basilica of the National Shrine of the Immaculate Conception. From there, they made their way over to the National Mall where a rally began at noon.

“The (rally) speakers were great — just amazing speeches,” Sander said, noting that he was particularly impressed by former National Football League Coach Tony Dungy and his wife, Lauren, as well as Jonathan Roumie, who plays the role of Jesus in the television series “The Chosen.”

The actual march began at 1 p.m., proceeding past the U.S. Capitol building and finishing near the U.S. Supreme Court. Sander said he was impressed by the large number of clergy, religious and seminarians that he saw taking part in the march, as well as a high volume of young marchers.

“This is a very young movement,” he said.

Along with the activity in Washington, many local opportunities were offered in the Rochester Diocese for people who wished to take part in the March for Life. For instance, a public prayer service at Holy Spirit Church, featuring exposition and Benediction, took place Jan. 19 just prior to the bus departures.

Also on Jan. 19, Bishop Salvatore R. Matano presided at a Holy Hour for Life at Rochester’s Sacred Heart Cathedral. The holy hour was part of a nationwide observance of the National Prayer Vigil for Life, in solidarity with other bishops around the country.

In Corning, a localized March for Life took place Jan. 22. The nearly half-mile march ended across from the Planned Parenthood facility on West William Street, where a 30-minute prayer was said for the unborn and their mothers. The event was organized by Chemung Valley 4 Life, an ecumenical organization.

At diocesan parishes, St. John the Evangelist Church in Newark Valley held a rosary noting the March for Life on the morning of Jan. 21; and Schuyler Catholic Community, Holy Family Catholic Community (Steuben and Livingston counties), Peace of Christ Parish in Rochester and St. Pius Tenth in Chili all planned observances of the national 9 Days for Life Novena Jan. 19-27.

The national March for Life first took place in Washington in 1974, in response to the now-overturned Roe v. Wade decision one year earlier. Sander noted that national marches are expected to continue — “We still have a president who wants to enshrine abortion in national legislation,” he remarked — while emphasis will increase on state marches for life, particularly in places like New York where legalized abortion continues.

“I believe that every life is precious to God. These aren’t our children, they’re God’s children, and they need to be protected because they’re the most vulnerable people in our society. They deserve to live,” said Sander, a member of Webster’s St. Rita Parish, where he serves as pastoral council chair.

Sander — who this year took part in his eighth March for Life — added that more laws must be passed to support mothers who choose life for their babies.

Tags: Abortion
Copyright © 2023 Rochester Catholic Press Association, Inc. All rights reserved. Linking is encouraged, but republishing or redistributing, including by framing or similar means, without the publisher's prior written permission is prohibited.