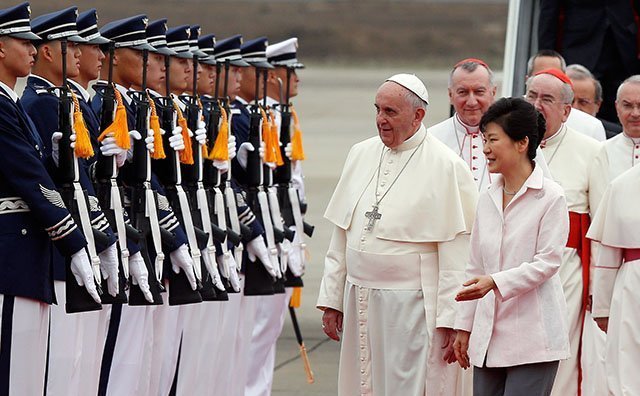 Pope Francis walks with South Korean President Park Geun-hye as he arrives in Seoul, South Korea, Aug. 14. The pope will beatify Korean martyrs and participate in the sixth Asian Youth Day during his five-day visit to South Korea.

"Peace is not simply the absence of war, but the work of justice," the pope said Aug. 14 in a speech at Seoul’s Blue House, the official residence of President Park Geun-hye.

Addressing some 200 government officials, Pope Francis noted that the country, divided between North and South since the end of the Korean War in 1953, "has long suffered because of a lack of peace," and he praised "efforts being made in favor of reconciliation and stability."

Introducing the pope before his speech, President Park said the war "still casts a shadow" over Korea, "dividing not only the country but so many families."

Tensions with communist North Korea have risen markedly in recent years, especially over Pyongyang’s development of nuclear arms. Less than an hour before the pope’s plane landed in Seoul, North Korea fired three short-range missiles into the Sea of Japan in the latest of a large number of missile tests it began launching in March.

Pyongyang had already refused the church’s request to send a delegation of Catholics to the South for the pope’s visit.

"Korea’s quest for peace is a cause close to our hearts, for it affects the stability of the entire area and indeed of our whole war-weary world," the pope said.

Speaking in English in public for first time as pope, he told diplomats in the audience, who included envoys of other Asian countries, that they faced the "perennial challenge of breaking down the walls of distrust and hatred by promoting a culture of reconciliation and solidarity."

That task, he said, "demands that we not forget past injustices but overcome them through forgiveness, tolerance and cooperation."

Pope Francis practiced some diplomacy of his own earlier in the day. As his plane entered Chinese airspace — the first time any papal flight had passed over the country — he sent a telegram of prayers and greetings to China’s President Xi Jinping.

The Vatican and the Chinese government have struggled over issues of religious freedom, including the pope’s right to appoint bishops, and have not had diplomatic relations since shortly after China’s 1949 communist revolution.

In a statement faxed to news agencies, China’s foreign ministry acknowledged the pope’s telegram and said its government is willing to work with the Vatican to improve bilateral relations.

The pope’s gesture was undercut by Korean press reports that Chinese authorities had arrested young people planning to attend an Asian Youth Day event with Pope Francis. A spokesman for the South Korean committee organizing the papal visit confirmed that some Chinese had been unable to travel to Korea.

"Maybe it’s because of the Chinese local situation or some complicated situation in China," Father Heo Young-yeop told reporters Aug. 14, but said he would not say more out of "fear for the safety" of the Chinese youths in Korea after they return to China.

In his speech to the South Korean authorities, the pope noted some of their country’s domestic problems, including "political divisions, economic inequities and concerns about the responsible stewardship of the natural environment."

Addressing such challenges, he said, requires that the "voice of every member of society be heard, and that a spirit of open communication, dialogue and cooperation be fostered." He also expressed hope for the strengthening of Korean democracy, which replaced authoritarian rule in the late 1980s after a popular movement in which Catholics played a prominent role.

The pope urged the leaders to show "special concern" for the "poor, the vulnerable and those who have no voice, not only by meeting their immediate needs but also by assisting them in their human and cultural advancement."

He said South Korea, the world’s 13th-largest economy, should be a "leader also in the globalization of solidarity which is so necessary today: one which looks to the integral development of every member of our human family."

President Park met Pope Francis’ plane in the morning at a military air base south of Seoul. Both of them voiced hopes that the pope’s Aug. 14-18 visit would help promote reconciliation on the Korean peninsula.

Also greeting the pope’s plane were family members of some of the 300 people killed in the April sinking of the Sewol ferry.

"My heart aches for you," the pope told them. "I remember the victims."

Other relatives were demonstrating during the pope’s visit, demanding that the government appoint an independent investigation of the disaster.

In the afternoon, the president welcomed the pope to the Blue House, named for the color of the tiles on its roof, where the two leaders reviewed an honor guard before meeting in private with a few advisers. In the customary exchange of gifts, Pope Francis presented President Park with a panoramic map of Rome, one of only 300 copies engraved and printed by hand to mark the jubilee year 2000.

President Park gave the pope a piece of embroidered fabric as an example of traditional Korean craftsmanship.

Contributing to this story was Simone Orendain.