In the 2020 presidential election, immigration is about two Americas¬† - Catholic Courier 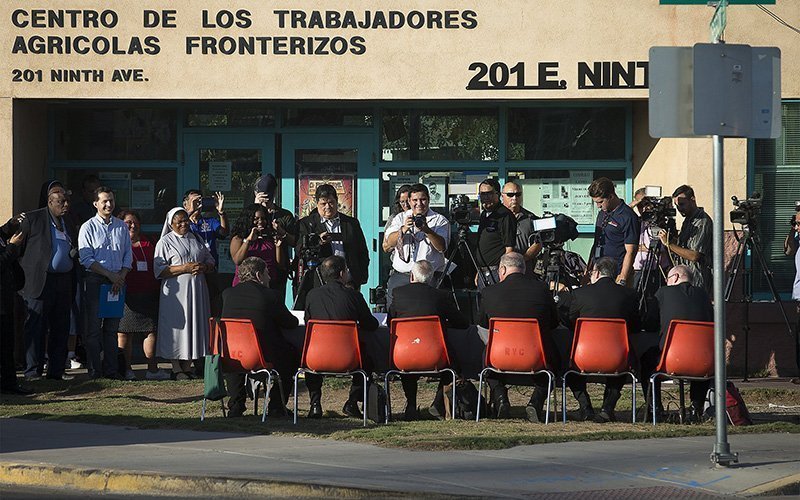 U.S. bishops are seen during a news conference about immigration outside the Centro Sin Fronteras in El Paso, Texas, Sept. 25, 2019. (CNS photo by Tyler Orsburn)

WASHINGTON (CNS) — The way two panelists at a key immigration conference see it, the issue Donald Trump ran on in his successful 2016 campaign emerges in this year’s presidential contest much the same way it did before: as a battle between a group seeking to stop demographic changes and one embracing them.

At the 17th annual Immigration Law and Policy Conference, held online Sept. 21 and 22 this year because of the COVID-19 pandemic, Ronald Brownstein, senior editor at The Atlantic, said immigration in the modern presidential election has showcased how members of the two main political parties are held together “much less by class interests and much more by attitudes toward the ways in which America is changing demographically, culturally.”

For the Democrats, the coalition of voters the party has assembled “basically revolves around the people and places that are the most comfortable with the way America is changing,” he said.

They tend to be young, people of color, college-educated white voters living in metropolitan areas, along with a “distinct minority of blue-collar white voters who were once the foundation of the party,” he added.

The Republican coalition has “increasing dominance” among blue-collar, evangelical, rural and, “up until now, older white voters and those are voters who tend to be suspicious or hostile to many of the changes both demographically and culturally remaking America,” Brownstein said.

Immigration “fits in within the set of issues that are now dividing the parties” because it involves welcoming migrants who look different from those of the past who now hold power.

“There is an old America, which is older, quieter, more rural, who has held onto political power since the birth of the nation,” said panelist Eduardo Porter, economics reporter for The New York Times. “They’re looking at a couple of decades down the line and they see a future where that is no longer going to be true. And that is pretty much inevitable. It’s baked in the demography.”

The result, Porter said, is a “collective freak-out over this fact.”

And though immigration still is a main talking point in Trump’s reelection bid, it doesn’t have the center stage it occupied in his first campaign, Brownstein said. Instead, social unrest over the killing of Black men and women by police has become a focus.

“The starkest way of saying it is: He’s focusing on Black people, not brown people,” Brownstein said. “He has shifted his focus to this idea that mobs from the cities and/or low-income housing projects are coming to get you, you know, you living the ‘suburban lifestyle dream,’ is the phrase in one of the tweets. … He has not elevated immigration in the way that he did in 2016.”

Back then, Trump used the imagery that “the caravan from Central America was coming to get you,” Brownstein said. That imagery of immigrants spurred enough voters to the polls to lock in a win for Trump in enough states rich in electoral votes.

“We’re going through this demographic transition and we’re seeing this kind of eruption of resistance from the parts of white America,” Brownstein said.

For Laura Collins, director of Bush Institute-SMU Economic Growth Initiative at the George W. Bush Institute, who spoke on another panel at the conference, the Republican Party has seen more polarization in the past few years and a harder shift to the right, she said, but Republicans can and have worked with Democrats on immigration issues in the past.

She reminded listeners that in 2013, the so-called “Gang of 8,” four Democrats and four Republicans, including then Sen. John McCain of Arizona and Sen. Lindsey Graham of South Carolina, worked together and passed a bipartisan bill on border security and brought comprehensive immigration reform back to the negotiation table.

And at the Bush Institute, named after a Republican president, she said, “we think immigrants are not only good for our economy. They’re good for us culturally, and those are things that we really think we should be promoting in terms of what immigration policy looks like.”

Though the party did not adopt a new platform at the Republican National Convention this year, she said what Trump is running on in this election in terms of immigration “is more of the same: more restriction more executive action.”

But there are Republicans, such as Sen. Robert Portman of Ohio, seeking to work across the aisle on immigration issues and there’s opportunity, perhaps not at the executive branch level but at the legislative level, for more common ground on the issue, she said.

Moderator Muzaffar Chishti, a lawyer and director of the Migration Policy Institute at New York University School of Law, pointed out to Collins, however, that Republican members of Congress haven’t “been that receptive … so why would we expect that this is going to be a little more hospitable if the Senate remains in Republican hands and there is a Democratic presidency?”

“Well, I’m an optimist for one, so, you know, you always have to assume that with the new Congress there’s always a new chance,” she responded.

But to those like Marielena Hincapi√©, executive director of the National Immigration Law Center, who has helped the Democrats craft their party’s agenda this year, there has been a “paradigm shift” with Trump as the head of the Republican Party, and even from his last campaign to this one.

What she calls “Trump 2.0” if he wins reelection, looks “very, very scary and threatening to legal immigration,” she said.

“The rhetoric of the Trump administration has been about undocumented immigrants and bad hombres and criminals, but when you actually look at the policy changes, they’ve been chipping away at our legal immigration system,” she said.

Advocates are preparing for a variety of ways to respond and come to the aid of immigrants regardless of the outcomes, she said.

“I think if anything, (what) we’ve learned under this administration is to expect the unexpected,” she said. “So, today we are planning for three main scenarios.”

One is a Joe Biden-Kamala Harris win, the other is a Trump reelection and third is a contested election, she said. And no matter what happens, all will affect real lives of immigrants as well as U.S. citizens connected to them.

In a Biden win, advocates will work on a pause period to assess what happened during the Trump administration, “righting the wrongs of the past,” she said, and “begin the hard work of building a 21st-century immigration system.”

That means looking at imminent threats to beneficiaries of the Temporary Protective Status and Deferred Action for Childhood Arrivals programs, as well as asylum-seekers, refugee resettlement and other affected programs.

But the most fundamental work ahead is “teaching the value and benefits immigrants have provided to the economy of the U.S.,” she said, particularly via jobs as caretakers and essential workers during the COVID-19 pandemic. “Immigrants are people who are a strength to our nation rather than a problem that needs to be fixed.”