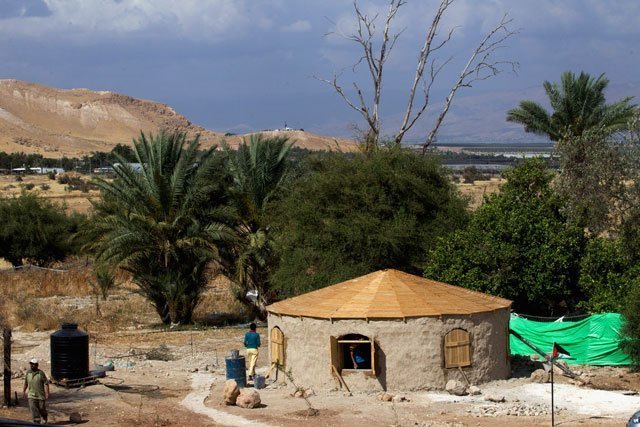 People walk outside a new center May 14 constructed by "Save the Jordan Valley," in partnership with Sharek Youth Forum, in Fasayel, West Bank.

JORDAN VALLEY, West Bank (CNS) — It took only a slight turn of an eye to see the glaring difference in levels of water availability and consumption between the Israeli agricultural settlement of Petza’el and the three neighboring dusty Palestinian villages just outside Jericho.

Up on the hill next to the settlement stood a gleaming white water tower for the use of the Israeli settlement, while in the village cluster, an old well built by Jordan prior to the 1967 war sat, neglected and locked, and an old agricultural aqueduct was dry.

Some participants in Pax Christi International’s "Pilgrims on the Path to Peace" 70th anniversary conference, taking place in Bethlehem, gathered in the village May 13 on one of the conference’s six simultaneous pilgrimages to see different realities of Palestinian life. Some 150 delegates from 30 countries participated in the five-day conference.

The three Palestinian villages are located in Area C, which covers 60 percent of the West Bank. Israel retains control of its security and civil land-management, practically prohibiting any Palestinian construction and development. Many of the water sources in the area are largely put to service for the approximate 10,000 Israeli settlers living in the area. The 60,000 Palestinians of the Jordan Valley, as seen in the three villages, are denied access to much of the areas’ water sources and are forced to purchase water at a high price over the summer months when their winter reserves run out.

An ecological pilgrimage to witness the disparities and one-sided use of the area’s natural resources is an essential part of understanding this reality, said Ann Farr, a member of the board of Pax Christi International as well as Pax Christi UK, who led the group to the Jordan Valley.

"There can be no peace without justice, which is about the denial of basic human rights such as shelter, water and land," she said. "It is important for people to actually see for themselves the reality of people in Palestine, including the people in this area who are denied use of water."

According to the Israeli human rights organization B’Tselem, the Jordan Valley and the northern Dead Sea make up approximately 30 percent of the West Bank and are the most significant Palestinian land reserves. But, says the Israeli group, since 1967, Israel has pursued various measures to annex this territory, including the prevention of development of Palestinian communities, systematically destroying homes in Palestinian Bedouin communities, denying access to water and strictly limiting Palestinians’ freedom of movement. At the same time, they charge, Israel has exploited the resources of the area for its own needs and allocated generous tracts of land and water resources to Israeli settlements.

As it celebrated its 70th anniversary of peace work, Pax Christi said in a statement it believes there can be no peace without ecological justice.

"Armed conflicts and irresponsible natural resource extraction have a significantly negative impact on the way communities interact with their environment — and affect us all," it said. "Pax Christi’s vision of peace, based on the Gospel, is one in which the dignity of every human person is unconditionally respected and in which their human rights are fully guaranteed."

Other pilgrimages touched upon the issues of justice and reconciliation, human rights, demilitarization and disarmament, peace education and women as peacemakers, with participants visiting different areas of the West Bank. The conference also was to include reflective sessions to discuss the topics in depth and to go beyond the local Palestinian situation to connect with global peace issues.

Fasayel, one of the three Palestinian villages in the Jordan Valley, is a perfect example of the consequences of Israel’s policies with the area’s natural resources, said Rashed Khaled Swafty, coordinator of the popular committee for protecting the Jordan Valley.

He said more than 100 families had left the area because there was no work or water for their agriculture fields and animals.

"When Israel demolishes a tent or confiscates a water tank, they are not only doing it because it is in Area C or because of security, they do it just because they want to break the Palestinians’ will, but this is one thing they cannot touch, and this is where hope comes from," Swafty said.

One example is teaching the villagers how to build from easily and cheaply produced mud bricks which, if demolished by Israeli order, can be swiftly rebuilt at almost no cost, he said.

Farmers have had to change the crops they grow and reduce the amount of land they farm, which means they end up leaving tracts of land fallow, vulnerable to state-supported confiscation based on an old Ottoman law still enforced here. The land then gets taken over by Israeli settlements.

Sami Dawod of the Palestinian Hydrology Group noted that his group was working to help the people stay on their lands by building water cisterns, giving water tanks and laying irrigation pipes.

The area is suffering from a double sword, noted Ellen Teague of the Columban Missionaries in Great Britain, with the difficult natural conditions of the area combined with Israel’s water policies.

"Long term, what are the prospects for communities like Fasayel?" she said. In the end she said, the struggle over dwindling resources becomes more acute, increasing conflict in the area. She said it was timely that Pope Francis will be issuing an environmental encyclical in June. He is expected to speak about water issues, climate change and extractive industries, and the tension and conflict arising from fights over resources.

She noted that many peace activists are now linking many issues of peace and environment together.

Ferdinand Djayerombe Vaweka of Development and Peace and Pax Christi Montreal, noted the complexity of the situation.

"Israel claims the whole of the land while Palestinians claim the exact same thing," he said. "And from what I have seen Palestinians are caught and imprisoned in their own land (with their freedom of movement being curtailed.) Yet, it is absolutely important to hear both sides of the story."

He said it was vital to encourage continued dialogue between the two parties even "when they don’t feel like they are being heard."