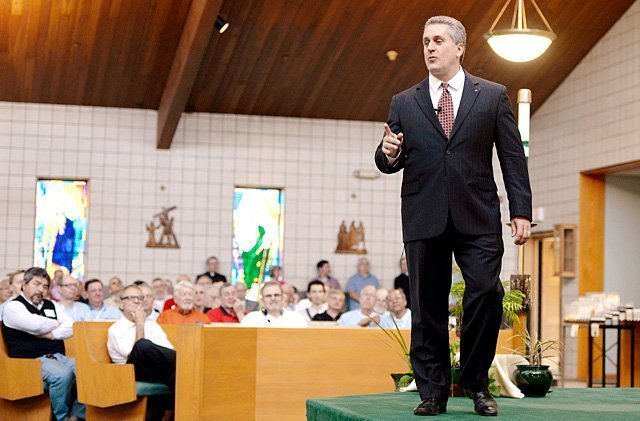 Tim Staples was first to speak following a Mass led by Bishop Salvatore R. Matano at the inaugural Rochester Catholic Men's Conference at St. Jude the Apostle May 16.

GATES — According to keynote speakers at the inaugural Rochester Catholic Men’s Conference, the open expression of spirituality on display should not be a one-day deal but serve as a way of life — beginning immediately.

At stake, they warned, is the preservation of family, society, civilization and the Catholic faith, not to mention each individual’s personal salvation. Men, they said, need to step up to reverse a cycle that has reached dangerous levels.

"I believe, with my whole heart, that the number one problem facing Catholic and other Christian churches is male spirituality," stated Danny Abramowicz, the last of three speakers on May 16 at St. Jude the Apostle Church.

"There is a crisis in the world of manhood that contributes greatly to the crisis of marriage and family which, as you know, are under attack in our society," said Hector Molina, the second speaker.

Tim Staples, the first presenter, added that vocal Catholic men are needed to counter threats to religious freedom in this country and persecution of Christians in other parts of the word.

"Never in the history of the world have Christians been under assault the way they are right now," he said.

The goal of engaging more men actively in their faith was built into the conference’s title, "Put Out Into the Deep" — a quote from Luke 5:4 in which Jesus instructs Peter to cast his fishing nets, resulting in a substantial catch.

Attendance suggested strong initial success toward this objective, as approximately 550 men convened for the keynote talks as well as Mass celebrated by Bishop Salvatore R. Matano that began the proceedings. The bishop then spent much of the day afterward hearing confessions while the program was taking place.

"Quite frankly, we’ve never seen this many men in a church before," remarked Father Mickey McGrath, pastor of Rochester’s St. Frances Xavier Cabrini Parish, who served as master of ceremonies. His comment was greeted by enthusiastic applause.

Yet the three keynoters, each of whom travels the country giving presentations, said overall male participation in church life is lacking when in actuality men should be spiritual heads of families. For example, Abramowicz pointed out that women typically outnumber men at Masses by a large number, with some men even dropping family members off at church but not going inside with them.

"We gotta stop it. We gotta stop it now," declared Abramowicz, a former National Football League wide receiver with the New Orleans Saints and San Francisco 49ers who is the founder of Crossing the Goal Ministries, an evangelical outreach for Catholic men.

"We have been wimps for far too long," remarked Staples, director of apologetics and evangelization at Catholic Answers, a lay-run organization based in California.

On the other hand, Staples said he converted to the Catholic faith in 1988 due to the influence of one man who was not wimpy about his faith. Staples, a former Pentecostal minister, said that while in the United States Marine Corps, he met a fellow serviceman, Matt Duda, who was so articulate about his Catholicism that after two years of trying to debate him, Staples instead became Catholic himself, with many family members eventually following suit.

Meanwhile, Molina implored conference participants to live their faith to their fullest because God "made us not for mediocrity but for greatness," and that the quest for greatness can start right away.

"I am going to submit to you this morning that this conference has the potential to change the world," said Molina, who gives seminars, workshops, missions and retreats in both English and Spanish.

One conference attendee, Dan Deford, said he was pleased with the speakers’ messages as well as the opportunity to bond with so many other Catholic men on May 16.

"To me the most important thing is, you’re not alone in your faith at this," said Deford, 53, from St. Kateri Tekakwitha Parish in Irondequoit, who acknowledged that he often feels religiously isolated in work and social situations.

Deford’s comment speaks to participants’ need for ongoing spiritual support following the conference. To that end, organizers plan to make the men’s conference an annual event and are emphasizing the formation of parish-based men’s groups, with information being shared at exultrochester.org. That is the website for Exult Rochester, a coalition of Catholic men from Rochester-area parishes who organized the conference in conjunction with the Diocese of Rochester.