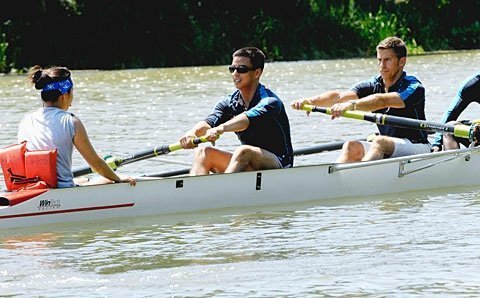 A former dancer, horseback rider and gymnast, the 52-year-old said she thought that she was done with physical activity after having had back surgery and suffering torn ligaments years ago.

Then she learned about a new rowing club — Cross Currents Minority Rowing — after talking to a fellow member of the Latino Professional Alliance at the University of Rochester. The friend raved about how good she was feeling thanks to rowing, and Rozzo said that she was sold.

"At that time, I was out of shape and couldn’t walk two blocks without becoming short of breath," Rozzo noted. "Rowing gave me back my life."

Rozzo’s enthusiasm and participation hasn’t wavered, as she rowed on the Cross Currents’ women’s and mixed teams as part of the first U.S. Rowing Diversity Invitational Regatta on July 30. Teams launched their boats from the Genesee Waterways Center on Elmwood Avenue.

Team members carried their own boats — some as long as 60 feet and weighing 200 pounds — from the boat house to the launch. Teams rowed a 2K course on the Genesee River in the morning and raced in side-by-side sprints in the afternoon. A team from the University of Rochester won the Rochester Cup, while Cross Currents’ own men’s team of four won the MVP Cup.

While out-of-town teams had been expected, financial constraints forced them to bow out, explained Lydia Boddie-Rice, Cross Currents’ founder. But just having a regatta to represent and encourage diversity in the sport is a huge achievement, and it was the first of its kind in the 136 years of U.S. Rowing, said Richard Butler, the organization’s inclusion manager. U.S. Rowing sanctions 200 events annually, he added.

Butler also oversees the America Rows initiative to boost minority participation in the sport. The fact that the Diversity Regatta took place in Rochester is a testament to its civil-rights legacy and activism, he said..

Luis Burgos, the city’s commissioner of recreation and youth services who came out to support the rowers, agreed that Rochester was a good choice for this inaugural regatta.

"Our community is at the cutting edge when it comes to so many things we do," he said. "We’re the change agents. … That’s our heritage."

Cross Currents, which celebrated its fifth anniversary this year, "is the most diverse rowing club in the country," an impressive achievement, Butler remarked. The club’s outreach, including hosting of the regatta, makes it possible for others in the community to take an interest in rowing, which will lead to more teams participating next year, he added.

"The event will keep growing," Butler said. "But you have to start somewhere."

U.S. Rowing’s board of directors decided it needed to make the sport more accessible to all communities about six years ago and created the America Rows initiative, said Glenn Merry, the organization’s chief executive officer, who graduated from James Monroe High School.

That need to change was highlighted in such cities as Detroit, Boston, Philadelphia and Oakland, where rowing teams practice on bodies of water in urban neighborhoods but few from those neighborhoods were taking part, Merry added.

Rowing is an exercise that anyone can learn, which also could help address the issues of health and obesity that continue to plague many urban neighborhoods, he added.

"You can do this whether you’re 13 or 73," Merry remarked. "It allows people to be part of a team and have respect for each other as well as (learn) a shared value of hard work."

More than 55 inner-city students got to experience that hard work firsthand during rowing clinics held at the Pittsford Indoor Rowing Center the day before the regatta as part of the weekend’s events, Boddie-Rice said.

Increasing that youth component — as well as parents’ embracing of the sport — are necessary to ensuring the program grows and that the kids who took part in the clinics go on to compete in next year’s regatta, she explained.

A seed was planted for Twylla Dillion last year when she saw Boddie-Rice and Oscar Pedroso, Cross Currents’ executive director, interviewed about the rowing club. She made a promise to herself to join the club and began training this past spring.

Dillion even learned to swim as part of her rowing training — another fear that she had been determined to overcome since her father died from drowning when she was 3.

While she’s only 31, Dillion said that she is already thinking of retirement when she hopes to take her new love of rowing across international borders to her family’s native country of Jamaica. There, she hopes to spend winters teaching people in St. Elizabeth — where her family is from — how to swim and row on the island’s many rivers and ponds.

"I see the importance of improving the relationship that people from my town have with the water and also introducing a sport that they could definitely excel at," Dillion remarked. "The many young people in Jamaica could use rowing and/or swimming (to) become elite athletes potentially earning college scholarships or entering the Olympics. Swimming and rowing to me are a natural fit in a country surrounded by water and prone to hurricanes. I hope to one day be influential in energizing the (water) sports on the island."