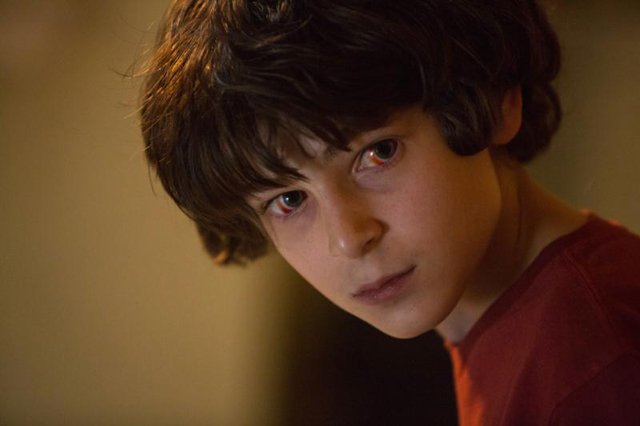 David Mazouz stars in a scene from the movie "Incarnate." The Catholic News Service classification is A-III -- adults. The Motion Picture Association of America rating is PG-13 -- parents strongly cautioned. Some material may be inappropriate for children under 13.
By John Mulderig
Catholic News Service
NEW YORK (CNS) — Somewhere in the planning stages of "Incarnate" (BH Tilt), someone must have thought it would be a good idea to combine elements of Christopher Nolan’s 2010 tour de force "Inception" with tropes that have been familiar to moviegoers at least since Linda Blair’s head went spinning round in "The Exorcist" way back in 1973.
The difficulty is that director Brad Peyton’s mostly secular addition to the exorcism subgenre of horror films only suffers by comparison to such memorable predecessors. The low-rent proceedings, moreover, include a portrayal of the Catholic Church that’s marked by lazy cynicism.
Thus, when Vatican official Camilla Marquez (Catalina Sandino Moreno) asks the film’s burned-out protagonist, Seth Ember (Aaron Eckhart), what he’s got against the church, he responds, "How much time do you have?"
Camilla has sought Seth out in the hope that he can help with a case that has foiled the priests dispatched to deal with it (a circumstance likely to irk Catholic patrons still further). This provides Seth with the chance to express his disdain for a spiritual approach to possession. To him, the foes to be confronted are "entities," not demons.
Seth’s expertise is based on the fact that, like some of the characters in "Inception," he can enter the minds of others, in his case the possessed. By rescuing them from the spell each entity casts when occupying someone, he cures them.
But this unusual gift has long made Seth a target for the forces of the underworld. In fact, one entity essentially ruined Seth’s life by causing a car accident that killed his wife and son and left him paralyzed.
Could this be the same evil spirit currently besetting Cameron (David Mazouz), the young boy whose plight Camilla has brought to Seth’s attention? Seth suspects so, and that’s his principal motive for eventually agreeing to see what he can do for the lad.
As scripted by Ronnie Christensen, "Incarnate" feels grim and uninspired even when it’s not antagonizing believers — as it does even by way of its ill-chosen title. There is a bit of a concession to Christian sensibilities during a key confrontation toward the end of the picture. And the bloodletting is kept within appropriate bounds for a mature audience throughout. But it’s still amounts, overall, to a slow slog through Hades.
The film contains occult themes, anti-Catholic sentiments, occasional violence with some gore, a few uses of profanity, at least one rough term and several crude and crass expressions. The Catholic News Service classification is A-III — adults. The Motion Picture Association of America rating is PG-13 — parents strongly cautioned. Some material may be inappropriate for children under 13.
– – –
Mulderig is on the staff of Catholic News Service.
Copyright © 2023 Catholic News Service, Inc. All rights reserved. Linking is encouraged, but republishing or redistributing, including by framing or similar means, without the publisher's prior written permission is prohibited.