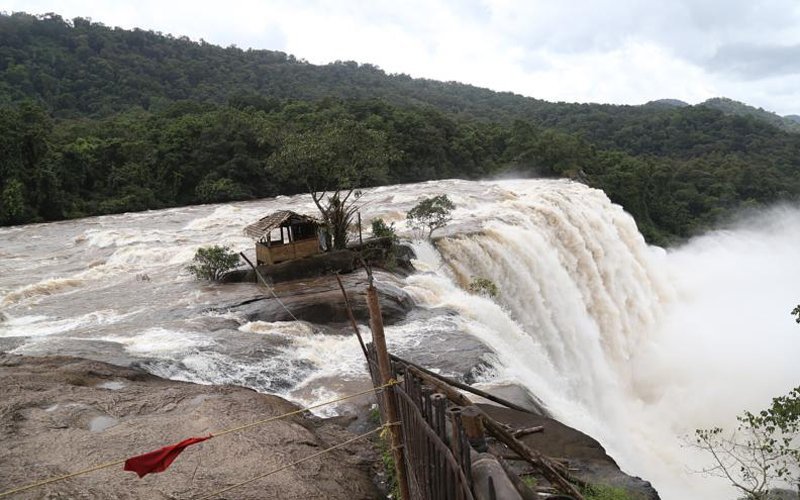 A makeshift shelter is seen Aug. 13 on the edge of Athirapally Falls in India's Kerala state. The Catholic Church has joined relief efforts as unprecedented floods and landslides continue to wreak havoc in Kerala, killing at least 75 people within a week. (CNS photo by Prakash Elamakkara/EPA)

Ucanews.com reported that all 41 Catholic dioceses in the southern state have opened schools and other institutions to accommodate flood victims and are cooperating to send food, clothes and other relief materials to affected areas.

Thousands have fled their homes to reach safer places after incessant rain since Aug. 13 filled reservoirs of Kerala’s 33 dams to the brim, forcing authorities to open sluices. This caused all 44 rivers to overflow and inundate homes, farms and roads and railways as floodwater gushed to the Arabian Sea on the state’s western border.

Ucanews.com reported the heaviest rain and floods since 1924 left about 75,000 people in relief camps and caused damage worth $1.2 million to crops and properties.

Water levels continue to increase in the plains amid threats of landslides in hilly districts. Road and rail lines remain flooded in several parts and the state’s main Kochi International Airport has halted operations following the inundation of runways.

According to the federal National Emergency Response Center, 187 people have lost their lives in Kerala since the monsoon season started in June.

“It is an unprecedented situation in my lifetime,” said 70-year-old Father Jose Plachickal, vicar general of Idukki Diocese, home to the state’s biggest dam. “The roads to many parishes are blocked because of massive landslides and uprooted trees.”

Most people living near rivers lost all they had, including homes, when dam shutters were opened.

Many are moving out with whatever they can carry, fearing landslides from saturated slopes could hit their homes at any time, the priest said. But some believe their homes are the safest place.

“We cannot venture out of our homes … there is no guarantee to come back as you may face flash floods and landslides any time,” said one farmer. “Now we don’t even feel safe in our homes as continuing rains have weakened our old houses. But where could I go?”

Father George Vettikattil, who directs Kerala Social Service Forum, which oversees the Catholic Church’s rescue and relief operations, said the situation is no better in other areas.

“Thousands are in relief camps. Drinking water is a real issue in many areas. It is a terrible situation,” he said.

In a report released on Aug. 12, the federal home ministry said 774 people had lost their lives in incidents related to floods and rain in seven states during the monsoon season.

The worst-affected states besides Kerala are West Bengal, Maharashtra, Gujarat, Assam and Nagaland.

Editors: The original story can be found at www.ucanews.com/news/church-out-in-the-field-in-flood-hit-kerala/83090.