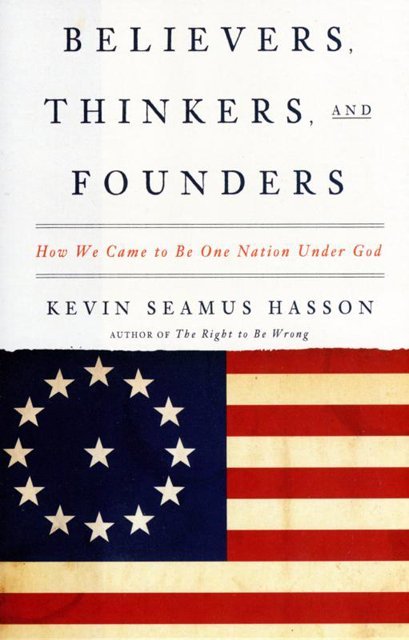 This is the cover of "Believers, Thinkers and Founders: How We Came to Be One Nation Under God" by Kevin Seamus Hasson. The book is reviewed by Eugene Fisher.
"Believers, Thinkers and Founders: How We Came to Be One Nation Under God" by Kevin Seamus Hasson. Image Books (New York, 2016). 227 pp., $20.
The author of this readable and informative volume studied law and theology at the University of Notre Dame and is the founder of the Becket Fund for Religious Liberty, so is well qualified to take on what was a central set of questions for the founders of the American republic, questions still being debated today.
He begins with legal cases challenging the "under God" phrase in the Pledge of Allegiance recited in public schools and other events. Does this amount to the establishment of a religion or of religion itself?
I note that I have a personal interest in this, since my father was one of the attorneys who worked on the legislation that was passed by the U.S. Congress in 1954 officially including "under God" in the pledge.
The author takes the reader on a quick tour of Western philosophy from Aristotle and Plato through St. Augustine and St. Thomas Aquinas and philosophers Maimonides and Spinoza. The intersection of these classical thinkers and believers is their efforts to understand what exists as having been "created" by something or someone prior to and transcendent of all that we can experience with our senses.
This survey sets up an understanding of the Enlightenment as the backdrop by which to understand the thinking of the founders of our American republic.
He notes the influence of the thinking of Isaac Newton on Thomas Jefferson and the emphasis of James Madison on the need for balance in government, with three coequal branches, the point of which was and is to make legislation difficult, in contrast with the easy ability of European kings to rule by personal fiat.
Hasson notes in passing that Abraham Lincoln added "under God" to his second inaugural address, perhaps one of the most important in American history in redefining "the Union" of the United States after the Civil War had shaken our country to its core.
Hasson’s point is that our founders emphasized that every human and every citizen of our country is endowed by the Creator with inalienable rights. These rights come before those granted by government and limit the role of government to ensuring and protecting these rights. Government does not give them to us. They are ours by reason of nature and our own human nature.
Underlying this was the search for a philosophical theism, which is not religious but the result of human reason and logic. Hence, he concludes, when the founders appealed to the Creator, they were not "establishing" any particular religion, or religion in general. Atheists and agnostics have equal rights, as humans and citizens, with all other Americans. This limits the authority of government, vesting it equally in all citizens.
– – –
Fisher is a distinguished professor of theology at St. Leo University in Florida.
Copyright © 2023 Rochester Catholic Press Association, Inc. All rights reserved. Linking is encouraged, but republishing or redistributing, including by framing or similar means, without the publisher's prior written permission is prohibited.