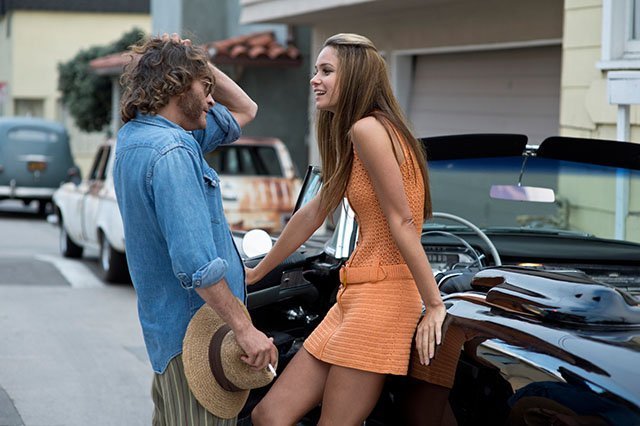 Joaquin Phoenix and Katherine Waterston star in a scene from the movie "Inherent Vice." The Catholic News Service classification is O -- morally offensive. The Motion Picture Association of America rating is R -- restricted. Under 17 requires accompanying parent or adult guardian.

NEW YORK (CNS) — The meandering plot of "Inherent Vice" (Warner Bros.) is perhaps better appreciated in the 2009 Thomas Pynchon novel on which the film is based.

On screen, however, its "nothing is as it seems" ambiance has all the charm of a bad sunburn.

Writer-director Paul Thomas Anderson’s adaptation emphasizes the narrative’s amorality and makes it all appear vaguely smutty rather than intriguing. When not aimlessly getting high, characters are being killed or else indulging in joyless sexual encounters.

What emerges is a series of scenery-chewing roles that were presumably fun to write and enjoyable for the actors to play. Private investigator Doc Sportello (Joaquin Phoenix), for example, stumbles perpetually through a fog of marijuana in 1970 Southern California.

The script’s many political references swirl around police contempt of hippies in the wake of Charles Manson’s murderous rampage, President Richard Nixon, a conservative group calling itself "Vigilant California" — as well as a hodgepodge of conspiracy theories.

Tough-talking police detective Christian Bjornsen (Josh Brolin) ought to be summing up the various conspiracies. But underneath his bluster, he’s as confused as everyone else.

Sportello is occasionally told to beware of the Golden Fang. What’s that? There are many proposed interpretations, explained at great length. It’s all supposed to be surreal fun. It’s surreal, all right.

The screenplay includes a riff on part of a line from Pynchon’s text: "As long as American life was something to be escaped from, the cartel would always be assured a bottomless pool of new customers." Escaping life with this movie turns out not the best use of anyone’s time.

The film contains frequent drug use, strong sexual content, including scenes of aberrant behavior and much crass banter, as well as pervasive rough and crude language. The Catholic News Service classification is O — morally offensive. The Motion Picture Association of America rating is R — restricted. Under 17 requires accompanying parent or adult guardian.