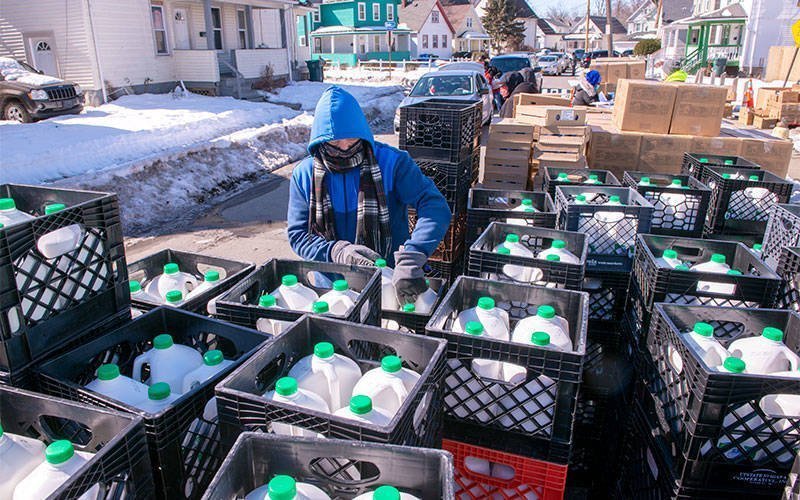 Volunteer Allen Griffith passes out Upstate Farms milk during a Feb. 25 Foodlink distribution in Rochester. The milk was supplied through the Nourish New York initiative. (Courier photo by Jeff Witherow)

EDITOR’S NOTE: This is the second story in a series on the Nourish New York initiative.

COVID-19’s arrival in New York last spring forced the temporary closure of many food pantries and soup kitchens throughout the state, including within the Diocese of Rochester. The timing was especially harsh, given that many people were faced with unexpected job losses due to the pandemic and needed emergency food assistance more than ever.

Within the emergency-food network, such food banks as Foodlink and the Food Bank of the Southern Tier are wholesalers, the suppliers from which soup kitchens and food pantries order the food they will distribute to those in need, explained Terra Keller, Foodlink’s chief operating officer. Food banks remained open last spring, but without functioning food pantries and soup kitchens, grocery stores with amply filled shelves and people feeling safe enough to venture out of their homes — the situation looked dire for those facing food insecurity, she said.

That’s where Nourish New York came in. In early May, Gov. Andrew Cuomo announced this new initiative would provide $25 million to help food banks and emergency-food providers throughout the state purchase food directly from New York farmers and food-manufacturing companies, who also were suffering as markets for their products had evaporated with the sudden closing of schools and restaurants. Food banks also could use the funding to facilitate drive-through food distribution and vouchers to purchase milk and other products at grocery stores.

“The timing of Nourish New York was welcome,” Keller said, noting that Foodlink already had pivoted from wholesaling food to a more direct-service model.

In April, Foodlink began conducting weekly contact-free, drive-through food distributions throughout Monroe County and nine surrounding counties — including Livingston, Ontario, Seneca, Wayne and Yates counties — the food bank serves, Keller said. Foodlink had to purchase the food for these events on its own, without receiving reimbursement from the food pantries and soup kitchens it usually provided food for, she said, noting that step marked a major shift for the agency.

“We knew that was the right thing to do. We recognized it was important to get as many perishables out to families as possible,” Keller said, noting that funding Foodlink received through Nourish New York came as a big relief. “We knew we had to get more food out into the community, and we were going to do that no matter what, but … having state dollars to get really quality product was really helpful.”

Foodlink received $1.6 million in the first round of Nourish New York funding in May. Recipients were allowed to use up to 15 percent of their grants on administrative expenses, so Foodlink used a portion of its funding to secure additional storage for the food it was purchasing and to rent more trucks to transport the products, Keller said.

“It ended up being $1.4 million that we spent on New York state agriculture,” she added, noting that the state had to approve the vendors from which the food banks bought food.

Both Foodlink and Food Bank of the Southern Tier, a subsidiary of Catholic Charities of the Diocese of Rochester, received an initial grant as well as a second funding round in late 2020.

“The Food Bank of the Southern Tier received $1,380,568 from the two rounds of the Nourish New York program in 2020,” noted Samantha Eck, communications manager. As a result, she said, “the food bank … was able to procure produce, dairy items and meats that might not necessarily have been available otherwise.”

The food bank distributed these food items through its partner agencies and through such programs as community food distribution and mobile food pantries, Eck wrote in an emailed response to questions from the Catholic Courier.

“In 2020, the Food Bank of the Southern Tier distributed 17,662,229 pounds of food, a 33 percent increase from 2019. Because of programs like Nourish New York, we were able to meet the increase in need, provide nutritious food to those experiencing food insecurity and support New York state farmers,” Natasha R. Thompson, president and CEO of the food bank wrote in an emailed response to questions from the Courier. “Nourish New York is a win-win for the food bank and New York state farmers and businesses.”

Cuomo has included a $25 million extension of the Nourish New York initiative in his 2021 State of the State agenda, but the Diocesan Public Policy Committee is urging local Catholics to ask the state for a significantly larger budget allocation.