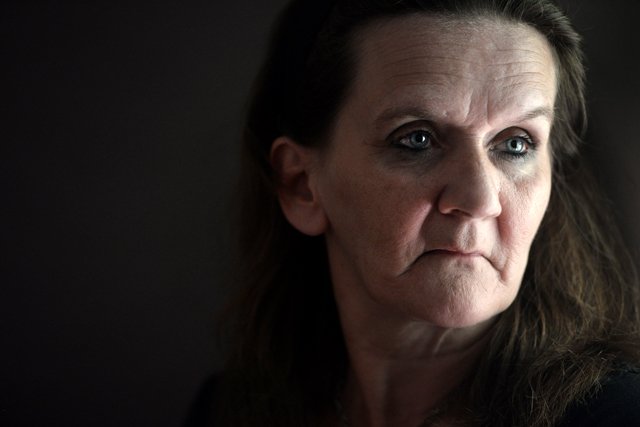 Lisa Riley has found a safe haven from heroin addiction and homelessness at A Place to Stay, a transitional-housing facility for women in Ithaca that is operated by Catholic Charities of Tompkins/Tioga.

ITHACA — Visually, nothing really stands out about a two-story house on the city’s south side where up to four women reside at a time.

However, the structure is unique in terms of what it provides for those people.

Known as "A Place to Stay," the residence serves as a transitional-housing facility for women who are homeless or at risk of homelessness. While living there, they work with staff members on skills that move them toward independence and a more permanent housing solution.

Catholic Charities of Tompkins/Tioga began the initiative this past spring after the agency secured private and community grants and obtained a lease on a facility that would fit its objectives. The lease took effect May 1, and a month later women began living in the four-bedroom house located on a residential street. Its interior, equipped with donated furniture, is neat and stylish throughout.

"Everything’s done over, beautifully renovated," Liddy Bargar said as she gave a visitor a tour of the house.

Bargar, who serves as Catholic Charities’ service navigator, said she came up with the idea last year for A Place to Stay, to address what she perceives as a gap in services for Ithaca-area women who are affected by homelessness. Bargar added that homelessness among women can be difficult to track because their plights are rarely apparent to the public.

Lisa Riley sits in her bedroom at A Place to Stay, a transitional-housing facility for women in Ithaca.

"I call it an invisible population, because women will go to great lengths to avoid literal homelessness. I started seeing this trend of women who were ‘couch-surfing’ — not literally homeless, but they certainly weren’t stably housed," Bargar said, noting that some women might stay temporarily with friends or family members, and others are prone to living out of cars: "You don’t see them much, but they’re there."

She added that many homeless women in the Ithaca area are coming out of substance-abuse treatment, recently released from prison, and/or in unhealthy domestic situations. With a waiting list of eight people in mid-July for one available spot at A Place to Stay, Bargar said that women’s desire for more stable housing is obvious.

She said the general intent of A Place to Stay is to give women refuge from the chaotic lifestyle that comes from being homeless — "just having a safe, serene place to gather your thoughts and ambitions, and make plans and have support in following through."

Bargar prefers for the Catholic Charities initiative to be described as transitional housing, as opposed to a homeless shelter, with applicants chosen based on their willingness to achieve self-sufficiency. Residents are generally limited to stays of 90 days and are obligated to follow such rules as remaining free from violence and substance abuse, participating in chores and interaction with fellow tenants, and maintaining contact with staff regarding their individual progress. The women pay a portion of their rent based on financial ability, and use food stamps toward meals. They are expected to sleep at A Place to Stay every night and no overnight guests are permitted, including their children. Bargar acknowledged that the rules are stringent, but pointed out that they exist so women can achieve the kind of self-discipline they’ll need in order to move forward.

Bargar noted that living conditions at the house are superior to homeless shelters and the facility is conveniently located near downtown and shopping venues — a key advantage because most of the women don’t have vehicles. Residents benefit in particular from the help of staff members regarding set goals that might include obtaining a driver’s license, finding steady work, enhancing job skills, managing finances and communicating with a landlord. The house is staffed during most of the daytime hours, and Bargar said she checks in often with the tenants to make sure they’re adhering to their schedules.

"I’m sort of like the house mom," she remarked.

Those living at A Place to Stay have thus far ranged in age from their late teens to early 50s. Bargar said that within the first couple of months of the house’s opening, one woman had already moved out and into her own private housing — "and that’s the goal."

"I’m proud of it, that I was able to have an idea and see it into actuality," Bargar commented about what has been a successful ministry thus far. "I’m very fortunate to work for an organization that let me follow it all the way through."