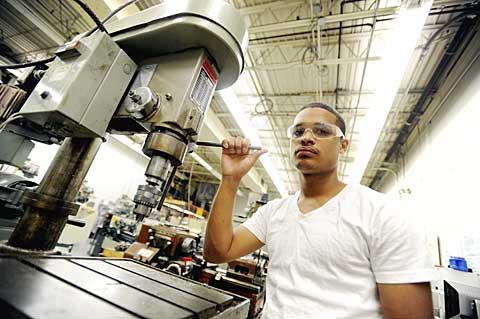 José Rivera is a graduate of BOCES’ Eastern Monroe Career Center, where he got hands-on experience with precision manufacturing technology.

José Rivera is not sure where his anger stems from, but it’s always there.

The 17-year-old Rochester native said he keeps that anger in his back pocket, always at the ready. Because of that lack of anger management, José used to be in fights about seven times a day. But participation in a youth council — called SWAT (Spreading Wellness Around Town) — created by a Monroe County initiative changed all that. And while he recently got embroiled in an altercation at school, it was his first fight in six months.

"I would just go up and hit you, just to hit you," José said June 8 during an interview at the Mental Health Association of Rochester’s Better Days Ahead office. "Now, I don’t say nothing to you if you don’t say anything to me."

José is a perfect example of the kind of youths Monroe County’s System of Care was designed to help, said Jerard Johnson, the program’s youth coordinator. Because of his brushes with the law, José’s case incorporates the juvenile-justice and mental-health systems, Johnson explained.

"We’re saying get all these systems communicating and talking with each other when dealing with our families and youth see what else is going on in these kids’ lives … and causing these behaviors," he said.

The initiative seeks to provide these youths and their families with a coordinated system of services and support located near their homes and communities, said Elizabeth Meeker, project coordinator for Monroe County ACCESS, which oversees the System of Care. Using funds from a six-year, $9 million U.S. Substance Abuse and Mental Health Services Administration grant, the county has partnered with such groups as the Mental Health Association and Ibero-American Action League to get underserved youths the help they need, Meeker added. Many of the youths are referred to the System of Care program by other agencies or law enforcement for a range of disorders from depression and post traumatic stress disorder to psychosis, she said.

"We’re looking to serve youths who are traditionally underserved in the mental-health system, particularly urban youth of color and the Latino community," Meeker noted. "More kids (are) being identified that wouldn’t have been identified. One of things we know as far as disparities go is that kids of color are more likely to end up in the juvenile (justice) system than mental health. Nationally, 70 to 80 percent of youth in the juvenile system have (mental health) issues. That is part of our focus: How do we divert those kids who would otherwise end up in juvenile justice … and try to get them support and services?"

Part of the disparity comes from families themselves who choose not to correlate what is thought of as bad behavior with mental-health issues, Johnson explained.

But through partnerships with community agencies and neighborhood organizations, individuals and even other family members, the System of Care strives to establish a support system that can stay in place even when the grant money runs out, Meeker said.

"Two of the core values … are that it’s family-driven and youth guided," she added. "It puts the child and the family in the driver’s seat for their care and the (service) providers partner with the child/family teams."

The SWAT youth council developed from this idea of giving youths a voice, Johnson added. Its members learn such valuable life skills as leadership and public speaking. José, who received training from a county program called PASS (Prevention, Awareness, Self-Empowerment and Support), has made presentations and attended health fairs to talk to other youths about his experiences and the resources out there to help them. PASS also has connected him with a young men’s group at Hillside Children’s Center and has provided opportunities to speak about his experiences at out-of-town conferences.

"There really is a lot out there (to experience outside Rochester)," José remarked. "It opened my eyes."

The council meets at Better Days Ahead at Village Gate on a weekly basis. Members talk about whatever is going in their lives, said José and Kiara Britt, an 18-year-old single mother who suffers from bipolar and attention deficit disorders.

"The group is like family," José said. "We don’t put anybody down."

That’s the kind of support that attracted Britt to the youth council. Her behavior first spun out of control when she was 13, she recounted, and she became promiscuous and tried to kill herself twice. Through a therapist, she was referred to St. Joseph’s Villa, a nonprofit agency that helps at-risk children and teens experiencing behavioral and emotional issues. She said that things did not improve for her, however, until she met Johnson through St. Joseph’s, noting that Johnson helped her see her self-worth.

Johnson served as the father figure she never felt she had in her own father and stood by her unlike other adults who had walked out of her life, she explained. He asked her to join the council about four years ago. Only a year after she joined, her grades went up.

"Before that, I never did anything in school," she noted. "Getting my work done and participating, it made me feel good."

SWAT introduced her to other peers and adults who, like Johnson, proved they cared about her future, she said, noting that their support allowed her to give up her medication and deal with her disorders. Britt also received services from a day treatment center.

"What I needed was someone to show me that they cared," she said. "(SWAT) offers people a chance to have the family they never had."

She said that although SWAT members were disappointed that she became pregnant, they threw her a baby shower and have allowed her to bring her son, Keandre, to the meetings. She even hopes to graduate this summer and go the University of Rochester to become a nurse.

"You can come here and not feel stigmatized," she said. "It’s a place to feel comfortable."

EDITOR’S NOTE: Information about Monroe County’s System of Care may be found at www.caringforouryouth.org.