Initiative keys on ways to get ahead - Catholic Courier 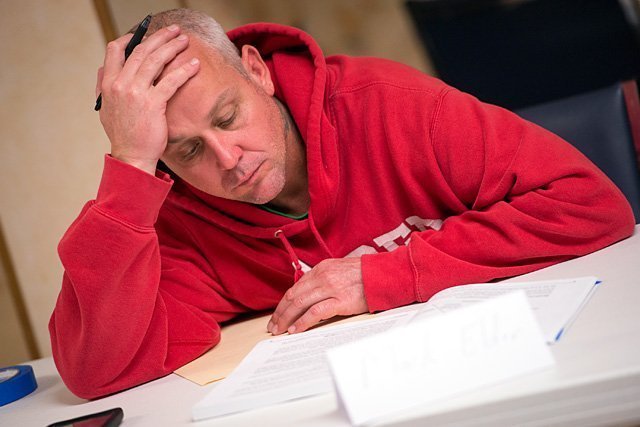 Mark Elder attends the first meeting of the 15-week Getting Ahead program at Hornell’s United Presbyterian Church Oct. 25.

One woman has a long history of money management issues, but has now instituted a savings plan.

Another is striving to find affordable housing and put to use her degree in child psychology.

Others say they have newfound courage and motivation that will spur them toward better futures.

All of these Steuben County residents are taking big steps forward, thanks in large part to their recent involvement with the Getting Ahead initiative.

Getting Ahead is a learning process that, through a better understanding of how the society and economy around them work, guides people toward developing strategies for personal stability — economic and otherwise. The curriculum is used nationwide and operates in the Southern Tier with Catholic Charities of Steuben serving as the lead agency.

According to Lynda Lowin, director of Turning Point services for Catholic Charities of Steuben, people often seek out Getting Ahead "at some kind of pivotal point in life" that is marked by instability, such as divorce, illness or financial crisis.

"Sometimes the people around them don’t have the ability to help them get ahead. They can help them get by, and there’s a difference between helping them get by and getting ahead," Lowin remarked.

Getting Ahead participants meet weekly in small groups over a 15-week period; a new session just began in October in Hornell. Lowin noted that 39 people have successfully completed the curriculum since Catholic Charities began offering it in 2012. Although attendees are mostly women, Lowin said that all but one group has had men as well.

Each session includes a shared dinner. Working with trained facilitators, participants study factors in the community that impact poverty such as banking, housing, employment and transportation. They also examine how their own lives are affected by financial matters, parenting issues, relationships and education. From there, each individual develops personal goals and identifies community resources that might help to achieve those objectives.

"The goal is not specifically to get a job or to increase your income. The goal is self-defined according to the learning that occurs. It could be a better paying job, but the success will not necessarily be measured by that," Lowin said. "Sometimes programs focus just on trying to ‘fix’ people, and this isn’t about that. It’s about understanding what a person wants for their future and then putting the resources in place to make that happen."

Valuable feedback toward shaping those futures is often provided by other group members, according to Edith White, a past Getting Ahead participant.

Lowin acknowledged that group members often bond closely: "Every single Getting Ahead graduate has identified that their greatest area of need is in the resource of being connected with one another and having ‘social capital,’" she said.

Upon completion of their Getting Ahead curriculum, participants take part in a celebratory graduation event with family and friends in attendance. Lowin said that it’s common for graduates to maintain contact with each other and with Paula Stark, the lead Getting Ahead facilitator, as well as other community resources and allies as they work toward achieving their stated objectives.

Laura Harris, for one, credits her Getting Ahead experience for renewed efforts at seeking employment and increasing her level of volunteerism.

"This has fired up the old wants and desires," she said.

EDITOR’S NOTE: To learn more about Getting Ahead, visit www.catholiccharitiessteuben.org/services/turning-point/getting-ahead or contact Lynda Lowin at LLowin@dor.org or 607-776-8085, ext. 2217.