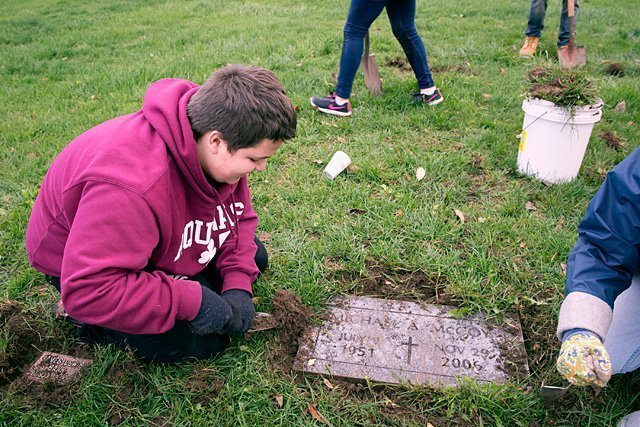 On Oct. 25, students from Aquinas Institute in Rochester helped clean the graves of indigent people buried at Oatka Cemetery in Scottsville. Above, student Joe Spampinato works to clean around a headstone.

A Catholic should never be denied a proper burial for lack of funds to pay for one.

That stance has long been part of the mission of Holy Sepulchre Cemetery, noted Lynn Sullivan, the cemetery’s chief executive officer.

"Our mission is to bury our Catholic brothers and sisters," she said. "At the end of the day, we are not going to turn anyone away."

This fall, the Diocese of Rochester sent a notice to all its parishes as a reminder that burials are available at the cemetery for less-fortunate families. Sullivan said she felt such an announcement was needed during this Year of Mercy and in light of Bishop Salvatore R. Matano’s statements about burial in recent years.

In a November 2014 letter regarding the Rite of Christian Burial, Bishop Matano noted that "our Catholic cemeteries are sacred places joined to our Catholic creed. They are places of prayer that remind us of our final destination: eternal union with God Whom we have come to know and to love in this life so as to live with Him forever in heaven."

Since families generally reach out to parish priests upon the deaths of their loved ones, priests can help families connect with Holy Sepulchre if they are in need of financial assistance, Sullivan explained. Once a priest makes a formal request to her staff and documentation has been provided regarding a family’s lack of funds, the cemetery will bury or cremate the deceased per the family’s wishes, or per the deceased wishes if they are known, she said.

The deceased is then buried in the next available plot at either Holy Sepulchre or Ascension Garden in Henrietta, Sullivan said. She noted that during the 1950s or 1960s the cemetery discontinued its prior practice of burying those of lesser means in a designated section of the cemetery.

"Part of this (awareness initiative) is community outreach," Sullivan said of issuing the diocesan announcement reminding parishes about the availability of free burials. She said she also wanted to ensure that all priests, especially the newly ordained, were aware that they can connect families in need with the cemetery.

"Some priests were more familiar with (the process) than others," she said. "Don’t send them elsewhere. Bring them to us. We’ll take care of it."

The diocesan document "Right of Burial Guidelines," issued June 2, 2016, states: "Burial rights should not be denied base on the inability to pay." How each family’s case is resolved differs based on the parish or regional cemeteries’ space availability and other circumstances, LeChase said in an e-mail.

"However, all the parishes will do whatever they can and try their best to not turn away anyone in need," he added.

The need to boost community awareness about the availability of burial assistance was evidenced by the reaction of Sister of St. Joseph Beth LeValley, who for several years has worked on local initiatives to help bury people who died alone in Rochester.

"This is great," remarked Sister LeValley, who said she had not been aware of Holy Sepulchre’s burial services for Catholic families in need.

Since 2012 Sister LeValley has been working with Monroe County officials to obtain the names of residents who died with no known next of kin or who had no resources to arrange for funeral services. As part of the Greater Rochester Community of Churches’ Faith in Action Network, Sister LeValley works with volunteers to arrange graveside services for such people and also attend their funerals. Most such services take place at Monroe County’s Oatka Cemetery in Scottsville or Riverside Cemetery in Rochester, according to GRCC.

While Sister LeValley said she welcomes finding in Holy Sepulchre another partner in providing burial services for the area’s poor, she said challenges remain. GRCC volunteers rarely know the religions of the deceased people whose burials they help to arrange, she noted.

Holy Sepulchre and Ascension Gardens were founded to provide burials for baptized Catholics, Sullivan said. Burial rights may be granted to non-Catholics, however, with sensitivity and concern for family circumstances especially in cases involving the loss of a child, she added.