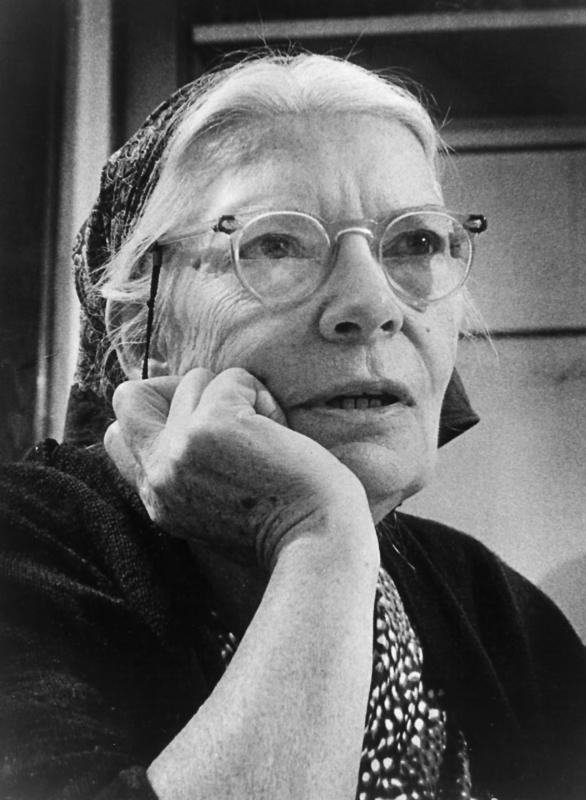 Dorothy Day, co-founder of the Catholic Worker Movement, is pictured in an undated photo. Cardinal Timothy M. Dolan of New York has opened the canonical inquiry on the life of the social justice advocate, the archdiocese announced April 19.
By Catholic News Service
NEW YORK (CNS) — A canonical inquiry into the life of Dorothy Day, co-founder of the Catholic Worker Movement, will begin soon and extend to the end of the year, according to the Archdiocese of New York, which is sponsoring her sainthood cause and is where Day oversaw Catholic Worker houses.
The Dorothy Day Guild, established in 2005 to promote her life and works, said on its website that the names of 256 people had been submitted as potential eyewitnesses to Day’s life. Of those, 52 have been chosen for interviews.
"Those too frail to travel will be interviewed in their home dioceses, some as far away as Europe," said an April 19 announcement by the archdiocese.
"Because many of the eyewitnesses still live in voluntary poverty, caring for the poor, the archdiocese will assist with airfare and lodging for those requesting assistance." Some of the interviewees’ memories go back to the 1940s.
From the interviews, the archdiocese will gather the evidence and present it to the Vatican’s Congregation for Saints’ Causes and to Pope Francis. If, after examining the information, the Vatican congregation and the pope recognize Day’s heroic virtues, she will be declared "venerable," the next step in the canonization process. She now has the title "servant of God."
Beatification and, ultimately, canonization are the next steps in the process. In general, one miracle determined to have occurred through the intercession of a candidate for sainthood is required for beatification and a second such miracle is needed for canonization.
In 2012, the U.S. bishops during their fall general assembly unanimously endorsed Day’s sainthood cause.
"This will require a team effort," said George Horton, the liaison for the Dorothy Day Guild. "Dorothy Day created or inspired dozens of houses of hospitality throughout the English-speaking world, but she was also a journalist who published The Catholic Worker newspaper. Her articles in that paper alone total over 3,000 pages. Add her books and other publications and we will probably surpass 8,000 pages of manuscripts."
In the coming months, Cardinal Timothy M. Dolan of New York will appoint a historical commission to issue a report placing Day’s life in historical context and review her unpublished writings. Theological experts appointed by Cardinal Dolan will review her published writings — two readers for each publication — with an eye toward doctrine and morals.
Day’s cause was first undertaken by one of Cardinal Dolan’s predecessors in New York, Cardinal John O’Connor, in 2000.
Shortly after Day was born in Brooklyn in 1897, her family moved to San Francisco, where she was baptized an Episcopalian. Her family later moved to Chicago, and Day attended the University of Illinois in Urbana.
However, she left college to go to New York City to work as a journalist. While in New York, she got involved in the causes of her day, such as women’s suffrage and peace, and was part of a circle of top literary and artistic figures of the era.
In Day’s personal life, though, she went through a string of love affairs, a failed marriage, a suicide attempt and an abortion.
But with the birth of her daughter, Tamar, in 1926, Day embraced Catholicism. She had Tamar baptized Catholic, which ended her common-law marriage and brought dismay to her friends.
As she sought to fuse her life and her faith, she wrote for such Catholic publications as America and Commonweal. In 1932, she met Peter Maurin, a French immigrant and former Christian Brother. Together they started the Catholic Worker newspaper — and later, several houses of hospitality and farm communities in the United States and elsewhere.
While working for integration, Day was shot at. She prayed and fasted for peace at the Second Vatican Council. She died in 1980 in Maryhouse, one of the Catholic Worker houses she established in New York City.
She has been the focus of a number of biographies. Other books featuring her prayers and writings have been published. A film biography, "Entertaining Angels: The Dorothy Day Story," starring Moira Kelly as Day and Martin Sheen as Peter Maurin, was made in 1996.
Copyright © 2023 Catholic News Service, Inc. All rights reserved. Linking is encouraged, but republishing or redistributing, including by framing or similar means, without the publisher's prior written permission is prohibited.