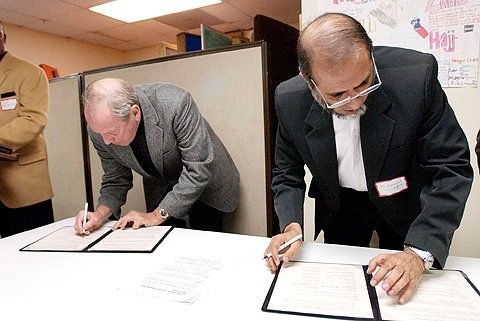 Bishop Clark and Dr. Muhammad Shafiq sign an agreement between the Catholic and Muslim faith communities May 5, 2003. (File photo)

The Diocese of Rochester made history on May 8, 1996, when it entered into a historic agreement with the Rochester Board of Rabbis and the Jewish Community Federation of Greater Rochester. With the signing of the Rochester Agreement the three communities pledged to work together to promote understanding of both faiths and combat religious intolerance and prejudice. Seven years later the diocese made history again, this time for making a similar pledge with Rochester’s Muslim community.

Bishop Matthew H. Clark not only signed both documents, but he also played a key role in bringing each of those agreements to fruition, according to Joseph Kelly, retired professor of religious studies at Nazareth College in Pittsford.

“Bishop Clark has been just so supportive of interfaith work. The fact that we had him just made all the difference in the world,” Kelly said.

The groundwork for the two agreements actually was laid before Bishop Clark became the Diocese of Rochester’s shepherd, and just after he was ordained a priest in 1962. Nostra Aetate, or “Declaration on the Relation of the Roman Catholic Church to Non-Christian Religions” came out of the Second Vatican Council and was proclaimed by Pope Paul VI in October 1965. Before that time, it was common for Catholics to blame Jews for killing Jesus, but Nostra Aetate completely changed the way Catholics viewed Jews, Muslims and members of other non-Christian religions, Kelly said. This document decried anti-Semitism in particular and religious intolerance in general, and opened the door for interfaith dialogue.

Then in December 1993, the Vatican formally recognized and entered into diplomatic relations with the state of Israel through the Fundamental Accord, and this provided the impetus for the Rochester Agreement, Kelly said. Representatives from the diocese, the Rochester Board of Rabbis and the Jewish Community Federation formed a task force in January 1994 and after 17 meetings and seven drafts, the Rochester Agreement was signed by Bishop Clark, along with Rabbi Alan Katz of the Board of Rabbis and Roberta Borg, who at the time was president of the Jewish Community Federation.

“It was vastly significant at the time because it was the first agreement in the world between a Roman Catholic diocese and the Jewish community in the area,” added Deacon Brian McNulty, who at the time was coordinator of the diocesan Office for Ecumenical and Interreligious Affairs.

Relations between Catholics and Jews in the Rochester area were mainly positive even before the agreement was signed, but since then they’ve improved, said Rabbi Katz, who along with Bishop Clark led pilgrimages to the Holy Land in 1998 and to Rome in 2005. In 2006 the diocese joined with St. Bernard’s School of Theology and Ministry and the Jewish Community Federation to launch the Brennan-Goldman Institute, which provides a formal framework for interfaith dialogue and educational opportunities for young people as well as the general public.

The Rochester Agreement also set the stage for the Catholic-Muslim Agreement of Understanding and Cooperation, which was signed by Bishop Clark and other Catholic and Muslim leaders on May 5, 2003. This agreement also rejects religious intolerance and promotes deeper knowledge and understanding of both Catholicism and Islam.

“As far as we’ve been able to determine, the agreement in Rochester was the first formal agreement between a Roman Catholic diocese and the mosques in the area,” said Deacon George Dardess, who helped write the agreement.

Deacon Dardess also is a member of the Muslim Catholic Alliance, which continues to implement the agreement’s terms and provide educational opportunities. Bishop Clark has been very supportive of interfaith work and is a profoundly pastoral bishop who takes seriously the Gospel message to go forth in the world and share God’s love, he said.

“He’s not frightened by religious differences and the usual bugaboo like most people. We’re all God’s children. He stands with all people. His pastoral vision is a tremendous one, and one he has put forward consistently on all levels,” Deacon Dardess said.