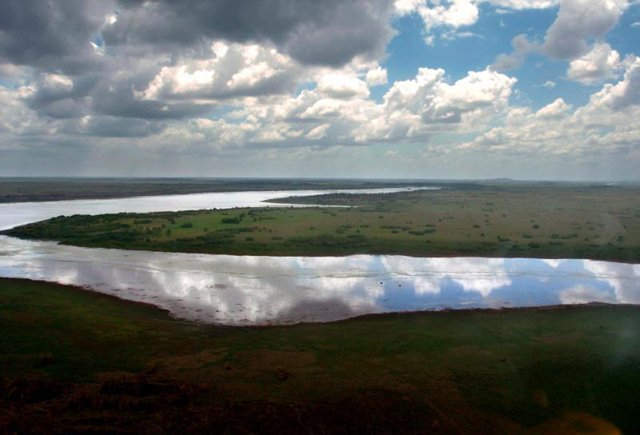 This is an aerial view of the Rio Platano nature reserve in Honduras. More than 60 scholars from around the world will present research papers on the environmental perspectives of different religions during an upcoming conference at Nazareth College in Pittsford.

More than 60 scholars from around the world will present research papers on the environmental perspectives of different religions during an upcoming conference at Nazareth College in Pittsford.

"Sacred Texts and Human Contexts: Nature and Environment in World Religions" will take place May 23-25 at the college and will feature panel presentations and keynote addresses about nature and the environment as seen through the lens of such religions as Judaism, Christianity, Islam, Hinduism, Buddhism and Jainism. The conference is being administered by Nazareth College and its Hickey Center for Interfaith Studies and Dialogue in collaboration with the Department of Religious Studies at Hobart and William Smith Colleges in Geneva.

Nazareth College has hosted similar conferences on sacred texts in previous years, but the theme of this year’s conference was inspired in part by the May 2015 release of Laudato Si’, Pope Francis’ encyclical on ecology, according to Dr. Muhammad Shafiq, executive director of the Hickey Center and a professor of religion at Nazareth.

"The environment and climate is challenging, and especially after the pope’s encyclical, we felt the need to have this conference in this year to create awareness in the light of what the pope has emphasized," Shafiq said. "This is (a) unique and significant conference. I believe we are pioneers in America to organize such an academic conference on climate change."

A number of local Catholics will be moderating panel discussions or presenting papers during the conference. Father William Graf, chair of the department of religious studies at St. John Fisher College, will moderate a May 24 panel on Pope Francis’ encyclical and what it means for the environment. During that discussion Marvin Mich, director of advocacy and parish social ministry at Rochester’s Catholic Family Center, will present a paper titled "Pope Francis, Care for Creation, and Popular Movements." Another panel discussion, titled "Interfaith Approaches to Scriptures and Environment," will be moderated by Dr. Nathan Kollar, cofounder of the Hickey Center and professor emeritus of religious studies at St. John Fisher College.

On May 24 Sister of St. Joseph Monica Weis, professor emeritus of English at Nazareth College, will present a paper on "Personal and Communal Conversion: Key to Environmental Integrity," and the next day Father George Heyman, president of St. Bernard’s School of Theology and Ministry, will present a paper on "Ali al-Khawas and Pope Francis: A Mystical Union with the Created World." A number of other panel discussions and papers also will address topics related to Pope Francis or Catholicism.

The conference will open May 23 with registration from 3 to 5 p.m., followed by dinner and a keynote address. Panel presentations and keynote addresses will take place May 24 and 25, and there also will be an afternoon excursion to Niagara Falls on May 25. On May 26 conference participants will visit Hobart and William Smith Colleges as well as several other destinations in the Finger Lakes region, including a winery, the Women’s Rights National Historical Park in Seneca Falls and the Book of Mormon Historic Publication Site in Palmyra.

For more information or to register, send an e-mail to interfaith@naz.edu.