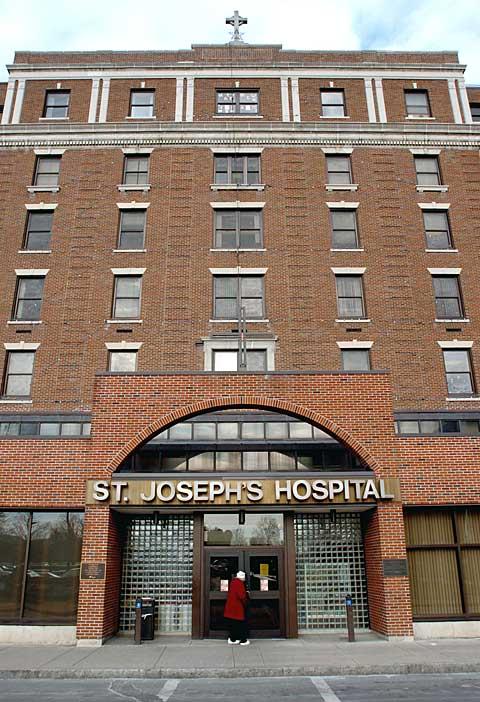 Donald Hartman, interim chief executive officer of St. Joseph’s Hospital in Elmira, said that the possibility of merging with another hospital is still being considered.

Leadership has changed at St. Joseph’s Hospital in Elmira, but the goal remains the same: land a partner without forsaking Catholic values.

This quest is currently being guided by Donald Hartman, who became St. Joseph’s interim president and chief executive officer upon the retirement of Sister Marie Castagnaro, SSJ, in mid-March.

"We will continue to keep all of our options open in terms of how we can best serve the region now and into the future," said Hartman, who is overseeing St. Joseph’s while its board of directors pursues a permanent replacement over the next several months.

Consolidation efforts with Guthrie Healthcare System of Sayre, Pa., and Arnot Ogden Medical Center in Elmira took place several times during Sister Castagnaro’s 22-year tenure at St. Joseph’s helm. But in November 2009, Sister Castagnaro announced that a hoped-for merger with Guthrie, which would commit $54 million to St. Joseph’s, was being suspended due in large part to the poor economic climate. Meanwhile, differences regarding Catholic health-care ethics have been the main stumbling block in past talks with Arnot.

Even so, Hartman said merger possibilities with Guthrie and Arnot are still on the table.

"We are currently in discussions with both potential partners, as Arnot has expressed interest in a future partnership and Guthrie has re-entered conversations with us given the overall changes and improvements in both their and our financial situations over the past 12 to 18 months," Hartman said. "There is reason to look at a collaboration with either or both parties as both provide attractive, albeit different, options to St. Joseph’s."

Hartman noted that St. Joseph’s enacted a restructuring plan in the past year that involved a number of layoffs and an aggressive attempt to recover reimbursement monies from New York state. He said St. Joseph’s has reduced its total debt load from $25 million to its current total of $19 million, and credited Sister Castagnaro for making "some very critical decisions" during her final year that put St. Joseph’s "on better footing than we’ve been in a long time."

However, he said a combining of forces with Guthrie and/or Arnot is in no way imminent.

"The logistics, implementation complexities and historical realities make such a complex partnership arrangement nearly impossible to pull off in the near term," he said. "I could envision, however, a time where such an arrangement might be possible allowing for an even more comprehensive regional health-care system for the Southern Tier."

Hartman emphasized that any merger will not come at the expense of the 295-bed hospital’s mission of serving the underserved while strictly adhering to Catholic ethics and directives.

"I don’t see us wavering from that whatsoever," said Hartman, noting that three Sisters of St. Joseph remain on the hospital’s board of directors even though it’s unlikely that a religious will emerge as the next CEO. "The Catholic identity and the following of Catholic directives are critical in order to proceed with any agreement."

One way or another, Hartman said St. Joseph’s need for an eventual partnership is almost a given: "We recognize that the days of a singular independent hospital are probably beyond us."

Hartman, 63, is the retired CEO at Imaging and Sensing Technology Corp. in Horseheads. Prior to that he was a health-care administrator for Eastman Kodak Co. in Rochester. He has been a member of St. Joseph’s board of directors for the last decade, becoming its chair in 2005.