Into the Storm - Catholic Courier 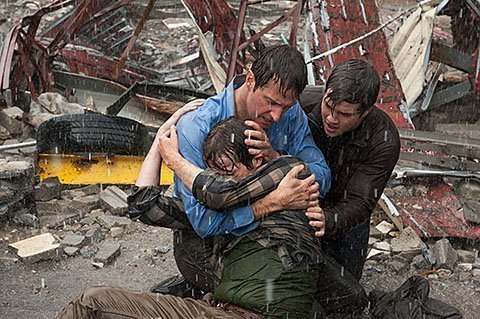 Max Deacon, Richard Armitage and Nathan Kress star in a scene from the movie "Into the Storm." The Catholic News Service classification is A-III -- adults. The Motion Picture Association of America rating is PG-13 -- parents strongly cautioned. Some material may be inappropriate for children under 13.

NEW YORK (CNS) — Perhaps you were under the impression that tornadoes are no big deal.

If so, along comes the old-fashioned, special effects-driven disaster movie "Into the Storm" (Warner Bros.) to prove you wrong.

Essentially a found-footage "Poseidon Adventure" for the landlocked, director Steven Quale’s film, as scripted by John Swetnam, does boast helpful touches of humor as well as such unimpeachable values as family solidarity and life-at-stake altruism. Still, the intensity of the building peril — together with the vocabulary it elicits from the cast — makes this ride on the whirlwind best for fully-grown thrill seekers.

Pity the small Midwestern burg of Silverton. Not only is it in the crosshairs of an unprecedented series of havoc-wreaking twisters, it’s also a town without a state, at least as far as Swetnam’s geographically coy screenplay is concerned. Are we or are we not in Kansas anymore? Enquiring minds want to know!

Be that as it may, Toto, Silverton is home to widower Gary Fuller (Richard Armitage) and his two teenage sons, Donnie (Max Deacon) and Trey (Nathan Kress). Alas for the lads, especially Donnie, Gary is the vice principal of the high school they both attend. He’s also demanding and emotionally aloof, which leads to the odd intergenerational skirmish.

When not squabbling with Dad or pining for his seemingly unattainable schoolmate Kaitlyn (Alycia Debnam-Carey), Donnie occupies his time videotaping everything in sight, a predilection that allows Quale to go (mostly) hand-held. Quale gets additional aid to that end from a crew of professional storm chasers who arrive on the scene just in time to commit Silverton’s impending demolition to pixels.

They’re led by peevish documentarian Pete Moore (Matt Walsh). Pete is on edge because he and the gang have been wandering the countryside for a year without bankable results, a failure for which he blames their brainy meteorologist, Allison Stone (Sarah Wayne Callies).

Even if he is on the professional and monetary skids, though, Pete ought to console himself with the thought that the steel-plated, tank-like vehicle in which he pursues unsettled conditions hither and yon across the heartland is one uber-cool ride.

Naturally, Gary’s boss — who doesn’t seem to spend much time watching the Weather Channel — insists on holding graduation outside. And naturally Donnie and Kaitlyn, with whom he’s finally connected, end up — for reasons far too complicated to bother with — in an abandoned factory on the outskirts of town where all manner of rusty debris is just waiting to fall on and entrap them.

Well, at least it makes for a memorable first date.

The film contains occasional grim violence and pervasive menace, a few sexual references, a couple of uses of profanity and frequent crude and crass language. The Catholic News Service classification is A-III — adults. The Motion Picture Association of America rating is PG-13 — parents strongly cautioned. Some material may be inappropriate for children under 13.