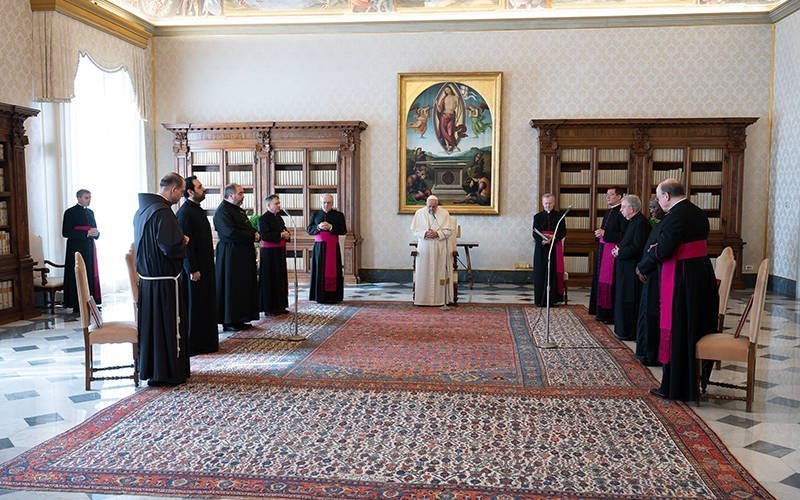 Pope Francis prays as he leads his general audience in the library of the Apostolic Palace at the Vatican March 10, 2021. The pope recalled his recent visit to Iraq and said it was meant to be “a sign of hope” for the people of the country who suffered from war, terrorism and the pandemic. (CNS photo by Vatican Media)

VATICAN CITY (CNS) — Despite years of suffering due to war and terrorism, the people of Iraq continue to look to the future with hope, Pope Francis said.

Recalling his recent visit to the country during his weekly general audience March 10, the pope said that while he saw “the opened wounds of destruction,” he also saw “around me the joy of welcoming Christ’s message.”

“I saw the hope of being open to a horizon of peace and fraternity, summed up in Jesus’ words that were the motto of the visit: ‘You are all brothers,’” he said.

In his talk, the pope said he was grateful to God for the March 5-8 visit, a trip that his predecessor, St. John Paul II, had wanted to make.

“Never before has a pope been in the land of Abraham,” he said. “Providence willed that this should happen now, as a sign of hope, after years of war and terrorism, and during a severe pandemic.”

Affirming the right of the Iraqi people to live in peace, Pope Francis praised the country’s rich history as the “cradle of civilization.”

Nevertheless, despite its cultural significance in the world, Iraq was destroyed by war, which is “always the monster that, as the ages change, transforms itself and devours humanity,” he said.

Departing from his prepared remarks, the pope denounced arms dealers who profit from war and sold weapons to terrorists not only in Iraq, but in other parts of the world suffering from violence.

“Today, who sells weapons to terrorists, who is carrying out massacres in other parts of the world, such as Africa for example? It is a question I would like someone to answer,” the pope said.

The answer to war, he added, is fraternity, which is a challenge for Iraq and “for many regions in conflict and, ultimately, for the entire world.”

Continuing his talk, the pope said the interreligious meeting in the ancient city of Ur, the birthplace of Abraham, was a significant moment that brought together the spiritual descendants of “our father in the faith.”

In Ur, the pope said, “standing together under those luminous heavens — the same heavens (from which) our father Abraham saw us, his descendants — the phrase you are all brothers and sisters seemed to resound once again.”

Recalling his visits to Mosul and Qaraqosh, two cities devastated by Islamic State militants, the pope called for prayers for the people so that God may give them the strength to rebuild.

He also appealed to those who fled those cities and urged them to “keep the faith and hope. Be weavers of friendship and of fraternity wherever you are.”

“And, if you can, return” to Mosul and Qaraqosh, the pope said.

Pope Francis said that, in Iraq, “despite the roar of destruction and weapons, the palm, a symbol of the country and of its hope, has continued to grow and bear fruit.”

The same goes “for fraternity: It does not make noise, but is fruitful and makes us grow,” the pope said. “May God, who is peace, grant a future of fraternity to Iraq, the Middle East and the entire world!”